Eagles' troubles can't be pinned on just the coach or QB 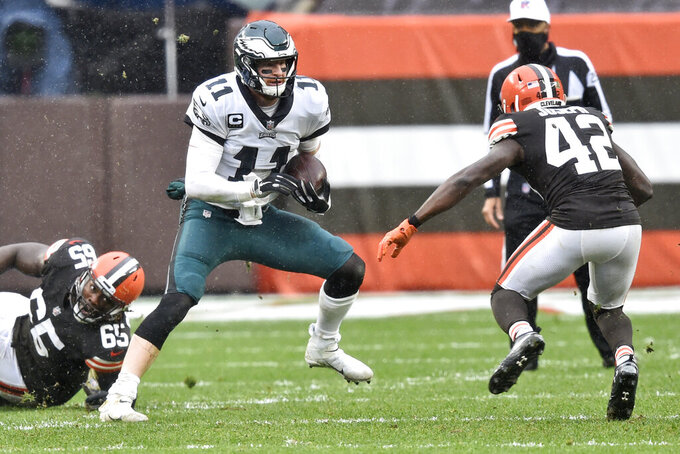 Philadelphia Eagles quarterback Carson Wentz (11) scrambles during the first half of an NFL football game against the Cleveland Browns, Sunday, Nov. 22, 2020, in Cleveland. (AP Photo/David Richard)

PHILADELPHIA (AP) — The Philadelphia Eagles have too many problems to pin the blame on one person.

While coach Doug Pederson and quarterback Carson Wentz get most of the criticism for the team's 3-6-1 record, which is good enough for first place in the pitiful NFC East, there's plenty of blame to be spread around.

Personnel boss Howie Roseman passed up wide receiver D.K. Metcalf to draft J.J. Arecega-Whiteside in the second round last year and took wideout Jalen Reagor ahead of Justin Jefferson in the first round this year. It's too early to judge Reagor, but Arcega-Whiteside was a healthy inactive last week and has only 12 catches in two seasons.

He also drafted backup quarterback Jalen Hurts in the second round this season when the Eagles had more pressing needs.

Injuries have been a major factor in the team's struggles. The Eagles have used 12 players on the offensive line, including 10 different starters. Tight ends Zach Ertz and Dallas Goedert, running back Miles Sanders and wide receivers DeSean Jackson and Alshon Jeffery have missed significant time.

Wentz is having the worst season of his career with 18 turnovers, including 14 interceptions. But he's constantly under pressure because his protection has been poor and his young receivers aren't always where they should be on routes.

Wentz has also missed open receivers and made bad decisions, including a pick-6 in a 22-17 loss at Cleveland on Sunday.

However, Pederson continues to dismiss any questions about benching his quarterback because he sees Wentz getting little help.

“In this city, it’s all about the QB and the head coach and everybody else can almost go by the wayside, I guess. So it’s almost like a two-man band," Pederson said Monday. "But there is enough work to be done by all positions. Receivers can play better. O-line can play better. ... Running backs, we need to hang on to the football. Quarterback needs to play better. Defensively, we have got to get off the field on third down. Got to be able to tackle better. Same way on special teams. Got to be able to tackle in space.

“There is enough to go around that none of it is excusable. We all hold each other accountable, coaches and players. That’s why I keep saying that we have a lot to play for. There is a lot of pride here. That’s what we’re going to do."

Philly’s wide receivers aren’t getting open enough and hardly make any contested catches. Wentz targeted his wideouts 17 times against Cleveland, getting only eight completions for 69 yards. Jeffery mistimed a jump on a pass inside the 10 in the fourth quarter and it went for an easy interception.

Linebacker Alex Singleton had 11 tackles, one sack, one fumble recovery, one quarterback hit and one tackle for loss. Singleton was signed by Seattle as an undrafted free agent out of Montana State in 2015. He was cut by the Seahawks, Patriots and Vikings, excelled in two seasons in the Canadian Football League and signed with Philly last year. Singleton made his first career start in Week 6.

“Alex has been a big bright spot for us,” Pederson said. “He’s played a ton of snaps obviously on defense. He’s a core teams player, great leader, great energy giver, just somebody that has really embraced his role.”

Wide receiver Travis Fulgham has two catches on 12 targets in the past two games after an excellent stretch of five games. He had 28 catches for 427 yards and four TDs after debuting with the Eagles on Oct. 4. His decline in production coincides with Jeffery's return. Jeffery has zero catches in two games.

“I’m not worried about Alshon’s presence right now. I’m concerned about Travis’ production and getting him better and helping him get better,” Pederson said. “He needs to get better. As I’ve mentioned, we all have enough to do, enough work to do, and obviously he is part of that group.”

2 for 12 — After going 0 for 9 on third down in a loss to the Giants, the Eagles weren’t much better. They converted just twice in 12 tries.

The Eagles host the Seattle Seahawks (7-3) on Monday. They’re 3-0 in prime-time games but are 0-5 against Russell Wilson, including a 17-9 loss in an NFC wild-card game last January.