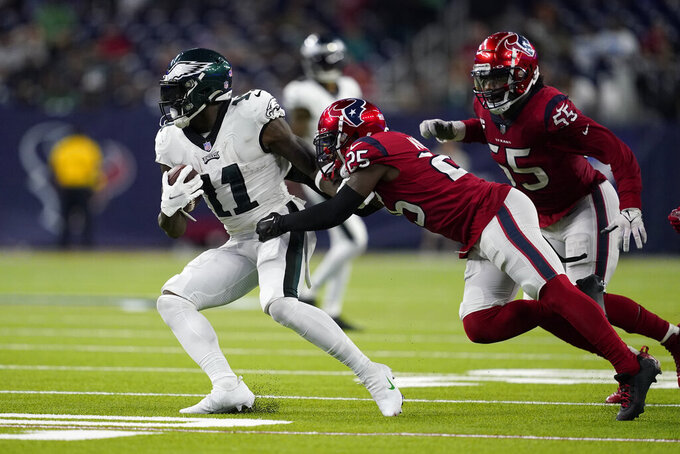 PHILADELPHIA (AP) — The World Series is over, and the Phillies had to settle for the NL pennant. The Union not only lost the MLS Cup final, they helped Philadelphia earn the dubious distinction of becoming the first city to lose two championships in one day.

That leaves it to the Eagles to try to win the next championship for the city. And so far, coach Nick Sirianni and quarterback Jalen Hurts have been a winning combination for the Eagles, who are 8-0 for the first time in franchise history and the lone undefeated team in the NFL.

But first come the NFC East rematches. The Eagles play the Washington Commanders (4-5) on Monday night for a second time and the first since they roughed up former quarterback Carson Wentz in a 24-8 rout in September. Wentz is on injured reserve following surgery to repair a broken finger, and the Commanders turned to Taylor Heinicke to take his spot.

Be it Heinicke or Wentz, the oddsmakers don't care — the Eagles are favored by 10 1/2 points, according to FanDuel Sportsbook.

Hurts has won 11 straight regular-season games, the longest active streak in the NFL. He has been giving defenses fits with his arm and his legs and has passed for 2,042 yards and 12 TDs and has run for 326 yards and six TDs this season. He has thrown just two interceptions while accumulating a 107.8 QB rating, which is second in the NFL behind Tua Tagovailoa's 115.9.

Hurts was 22 of 35 for 340 yards and three touchdown passes, one each to DeVonta Smith, A.J. Brown and Dallas Goedert against the Commanders.

“He's been able to attack all parts of the field,” Sirianni said. “The more they have to prepare for, the harder we are going to be to defend.”

Washington edge rusher Chase Young could make his season debut a year to the day after tearing the ACL in his right knee. He and doctors, trainers and the team have been very careful about his recovery after Young’s surgery involved grafting part of his left patellar tendon to fix the tear on the other side.

“He has a different amount of energy that is really unmatched,” Leno said. “I haven’t seen it from a lot of people in my years of playing. He just has this aura about him and this energy about him that’s completely different from a lot of players that I’ve gone against and played with.”

The defensive line already has been the Commanders’ biggest area of strength, with Daron Payne, Jonathan Allen and Montez Sweat leading the way.

“They’re wreaking havoc,” cornerback Kendall Fuller said. “They’re getting to the quarterback, making him get the ball out of their hand and stuff like that.”

Goedert had his fourth career performance with 100-plus receiving yards, with eight catches for 100 yards and one touchdown against Houston. The Eagles tight end reached 100 yards receiving for the first time this season and may finally be considered among the best in his league at his position.

“There’s no question about it, Dallas is one of the premier tight ends in this league right now,” Eagles offensive coordinator Shane Steichen said. “It starts in the meeting rooms. It starts on the practice field. The way he takes care of his body to get ready for football games. And the way he mentally prepares for football games. Then just his strength and size and his quickness and his play strength, it’s at the top of the league right now without question.”

After the Eagles sacked Wentz nine times in the teams' first meeting this season, Washington’s offensive line needs to be better to keep Heinicke upright. If that doesn’t happen, the running game has little chance of getting going.

“We got to go out there and do our jobs and execute at a high level — individually and unit-wise,” Leno said. “That’s how we can give our team the best chance to win.”