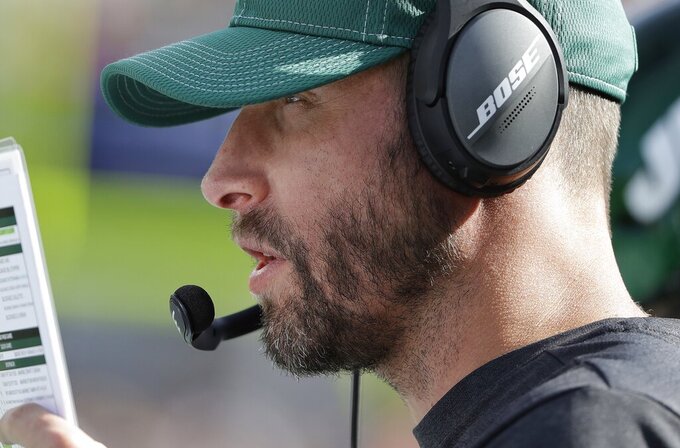 New York Jets head coach Adam Gase watches from the sideline in the second half of an NFL football game against the New England Patriots, Sunday, Sept. 22, 2019, in Foxborough, Mass. (AP Photo/Steven Senne)

FLORHAM PARK, N.J. (AP) — The New York Jets had just dropped to 0-3 after a brutally bad loss at New England and the players were frustrated and searching for answers.

Then came a sliver of optimism in an unexpected spot: the schedule, in the form of a bye-week break.

"Honestly looking back at it, I thought it was too early, but we need it," safety Jamal Adams said. "We need it to get away, to reflect and everybody look at themselves in the mirror. Players, coaches and everybody. We just need to ask what we can do better and everybody is going to do that.

"I challenge the team. We'll be fine when we get back."

Coach Adam Gase half-jokingly said he never thought he'd be happy to have a bye so early in the season. But that's where things stand for the Jets in Week 4 of a season already at a critical point.

"We definitely need to get healthy," center Ryan Kalil said. "More than that, we've got to reset and we've got to go back to work."

While it's hard to blame any Jets players or coaches for being happy for the break, there's plenty of blame to go around for the dismal start.

The laundry list could start with former general manager Mike Maccagnan not hitting on enough of his draft picks, leaving the team without depth in key areas. Chairman and CEO Christopher Johnson has taken heat for not deciding sooner to fire Maccagnan, leaving new GM Joe Douglas in a tough spot as far as building a roster for this season while taking over in June.

Gase's playcalling has left something to be desired, too, with the expected "electric" offense still not powered up. The Jets haven't scored an offensive touchdown in nine quarters, and the defense has accounted for more points so far: 15-11.

There are certainly valid excuses, namely New York having to start three quarterbacks in three games. Sam Darnold was sidelined by mononucleosis after Week 1. Then, backup Trevor Siemian suffered ligament damage in an ankle, leaving third-stringer Luke Falk to go from the practice squad to sudden starter.

"It would be nice to get (No.) 14 back," Gase said of Darnold. "That always helps things because he makes some bad things go away."

Wide receiver Quincy Enunwa was lost for the season with a neck injury, and tight end Chris Herndon is serving a four-game suspension for violating the league's substance abuse policy.

The offensive line, despite upgrades with Kalil at center and Kelechi Osemele at left guard, hasn't been anything close to a cohesive unit. They also haven't opened many holes for Le'Veon Bell, who has rushed for 163 yards on 56 carries — a measly 2.9 average.

"I just know this team has a lot of talent," Bell said, insisting he's not frustrated. "We just have to put it together. It's a new system, guys' first time playing together, a new coaching staff. We've just got to mesh everything together and we've got to get on board."

"There's no point in sitting here and beating each other up, pointing fingers," Gase said. "That's not going to do anything. We've got to go back to work and we've got to get things fixed."

Otherwise, things could really start to spiral — and there won't be any breaks in the schedule.

At least, not until the season is over.

It doesn't get any easier for the Jets as they continue a rough stretch of games coming out of the bye, starting with a road game at Philadelphia. Then, New York is home against Dallas and New England before another road game at Jacksonville.

The game against the Eagles could mark the return of Darnold. The second-year quarterback will have tests next Monday that will determine if his swollen spleen has reduced enough to get medical clearance to practice next week and play.

"Even if everything was great and we were 3-0, I'd want to be out there helping the team," Darnold said. "So, it's just, for me as a competitor, I've always wanted to go out there and help my team win. So, I'm anxious to do that and trying to get healthy as fast as I can."

Darnold said earlier in the week he believes the Jets will "go on a little run here" after the break and that it will be "fun."

The latter has certainly been in short supply so far. Winning, of course, can change all that in a hurry.

"I think getting an extra week for guys to get healthy and for certain guys to come back is definitely going to help us out," wide receiver Jamison Crowder said. "It's still early. Like they say, it's not about how you start, but how you finish."