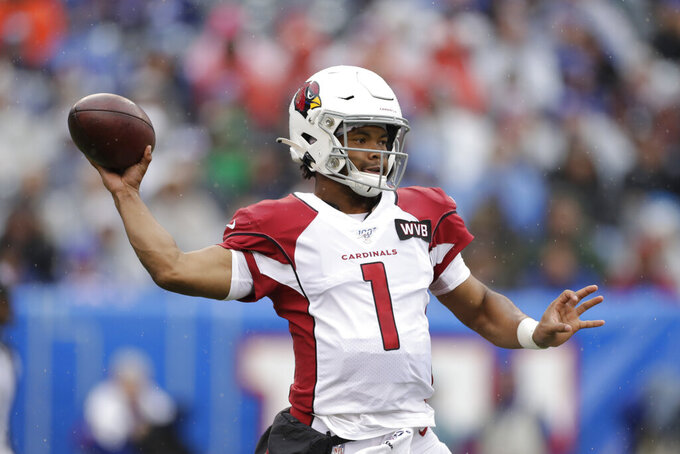 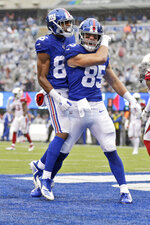 EAST RUTHERFORD, N.J. (AP) — The game was billed as the return of Saquon Barkley to the New York Giants' lineup and the matchup of first-round rookie quarterbacks Kyler Murray and Daniel Jones. It had an unexpected star: Arizona Cardinals backup running back Chase Edmonds.

Edmonds rushed for career highs of 126 yards and three touchdowns and the Cardinals' defense sacked Jones eight times and forced three turnovers in a 27-21 victory Sunday.

"Extremely stoked today," said Edmonds, a Pennsylvania native who rewrote the rushing records at Fordham University in New York City. "Coming back here, being a small-school guy, I obviously had a chip on my shoulder. Obviously, Saquon was coming back. I knew it was going to be an electric atmosphere.

"I just wanted to go out here and show people and make a name for myself."

Edmonds did in carrying a career-high 27 times with starter David Johnson banged up. It helped the Cardinals (3-3-1) win their third straight for the first time since 2015 and sent the Giants (2-5) to their third straight loss in the game played in rain that grew in intensity from the second quarter on.

"I'm fired up for the guys who have been here and been through some tougher seasons," Cardinals first-year coach Kliff Kingsbury said. "They all know what's been said about this team. We started out with some tough losses. They stuck together and continued to fight and continued to get better. We know we have a long way to go, but there is great leadership in that locker room."

Edmonds also showed the Cardinals grit. He vomited into a sideline garbage can after scoring on his second 20-yard touchdown run in the first quarter and never backed down, adding a 22-yard TD run in the third quarter.

His previous rushing high was 68 yards against Cincinnati two weeks ago. The second-year back had 24 carries total in the first six games.

The Cardinals defense also got four sacks and a forced fumble from Chandler Jones , linebacker Jordan Hicks had an interception and cornerback Patrick Peterson had a sack and forced fumble to help seal the game.

"Chan was great. Just watching him go to work_the whole defense really," said Murray, the No. 1 overall draft pick who was 14 of 21 for 104 and no interceptions. "Having Pat (Peterson) back, they really got the job done today when we needed it the most. We ran the ball. We ran the hell out of it. The O-line blocked well. It was a tough road win, but we got it."

Zane Gonzalez kicked field goals of 47 and 35 yards, the last coming after the forced fumble by Peterson, who was playing in his first game after a six-game suspension for using performance enhancers.

"Everyone is frustrated," said sixth overall pick Daniel Jones, who finished 22 of 35 for 223, including a 28-yard TD to Rhett Ellison . "But I don't think we're discouraged at all. We'll be back to work tomorrow."

Eli Penny recovered a blocked punt in the end zone for a touchdown and Barkley , who rushed for 72 yards on 18 carries, scored on a 7-yard run to get the Giants within 24-21 with 8:13 to go.

The Cardinals scored the first three times they had the ball with Edmonds scampering in almost untouched on his 20-yard runs. The second was set up by Hicks' interception. Gonzalez ended the third scoring drive with a 47-yard field goal early in the second quarter.

New York needed only 96 seconds to get back into the game. Jones capped a four-play, 79-yard drive with his TD toss to Ellison to get the Giants on the scoreboard.

Michael Thomas, a Pro Bowl pick on special teams last season, blocked a punt by Andy Lee in the end zone on the ensuing series. Penny recovered for the touchdown to make it 17-14.

Chandler Jones' sack and recovery led to the third touchdown by Edmonds.

NOTES: WR Golden Tate led the Giants with six catches for 80 yards. .. Lee finished with four punts for an average net of 26.4 yards. ... PK Aldrick Rosas banged a 37-yarder off the right upright in the third quarter with the Giants down 24-14. ... Giants coach Pat Shurmur is winless in five challenges this season. ... Arizona's Dennis Gardeck partially blocked a punt by Riley Dixon punt early in third quarter and it went 38 yards. ... Arizona players and coaches high-fived 10-year-year-old Matthew Gierer after a good national anthem.

Cardinals: Johnson was limited to one carry by ankle and back issues.

Cardinals: at New Orleans on Sunday.

Giants: at Detroit on Sunday.