Elliott lags in rushing race as Cowboys offense hums along 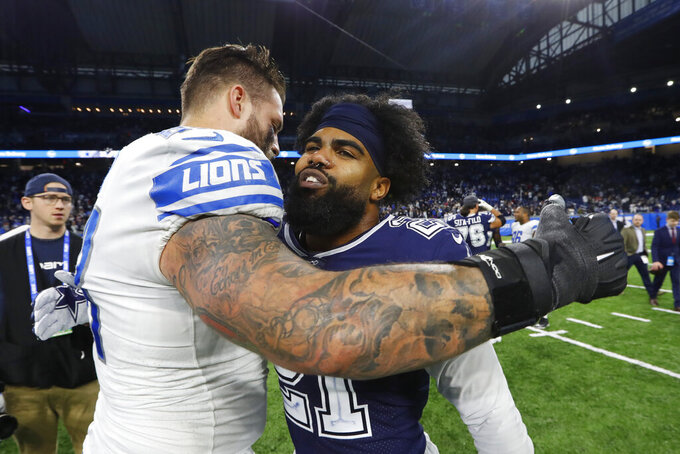 FRISCO, Texas (AP) — Ezekiel Elliott lost interest in talking about another 40-yard outing because the star Dallas running back said he felt awkward discussing his struggles in a game the Cowboys won.

Center Travis Frederick started his assessment of the run game with a reminder that there might be a reason Dak Prescott had the most yards passing in a three-game stretch in franchise history.

This season is shaping up as Elliott’s first full year without a rushing title, and is already notable as the first with consecutive games of fewer than 50 yards rushing. It could also be the first time Dallas has the NFL’s No. 1 offense, its current ranking, in more than 40 years.

“I’m going to be a lot more worried when he gets bottled up and we can’t pass the ball,” Frederick said of Elliott, the two-time rushing champion who is eighth this year and more than 200 yards behind leader Christian McCaffrey of Carolina with six games to go.

“At some point we’re going to find a defense that is doing a certain thing to make it work on both sides and then at that point we have to hopefully have the background to be able to step around that, find a workaround for that.”

And that very well could be Sunday when the Cowboys (6-4) visit New England (9-1) and the league’s No. 1 defense, the only one allowing fewer than 100 yards rushing and 200 yards passing per game.

While Elliott is tied for the NFL lead with McCaffrey and second-leading rusher Dalvin Cook of Minnesota with five 100-yard games apiece, his highest total in the other five games is 62 yards, with a per-carry average of 3.1 yards.

The Vikings made sure Elliott didn’t beat them two weeks ago, holding him to 47 yards on 20 carries and escaping with a 28-24 win by forcing a turnover on downs inside their 15 when the Cowboys went to Elliott on three straight plays.

Detroit had the same idea last weekend, but Elliott managed touchdowns on a 1-yard plunge and a 17-yard screen while being held to 45 yards on 16 carries in his second straight game without a carry of at least 10 yards.

“As long as the offense is rolling, it’s good,” said Elliott, who has 833 yards rushing and seven touchdowns along with 220 yards receiving and one score. “We know we’ve got some work to do on the run game. Week in and week out, we’re going to attack that and we’re going to get better in the run game.”

The Cowboys were stubborn about it against the Vikings, which cost them with a chance to take the lead late. Facing third down when trying to run out the clock against Detroit, Prescott faked to Elliott and threw a clinching first-down pass to wide-open tight end Blake Jarwin.

“I think it’s unfair to judge it just pass game and just run game,” Frederick said. “I agree with everybody here. The run game was not as productive as you would hope, as you claim to be a running team. But I would say the offense was productive as a whole.”

Part of the discussion is moot. The Cowboys just gave Elliott a $90 million, six-year extension to end a preseason-long holdout. Even with Prescott in the top five in yards passing, touchdowns and completions, the team’s identity isn’t changing that fast.

“We love giving him the ball,” coach Jason Garrett said. “Even a game like (Detroit), when the running game is a little bit more challenging, you look at all those really good 3-, 4-, 5-, 6-yard runs that he made throughout the game. We think a lot of him.”

And Elliott doesn’t need a pep talk, particularly after wins.

For Elliott, any other approach is just ... awkward.

NOTES: With CB Anthony Brown sidelined for the season by a torn triceps, the Cowboys signed Deante Burton off the Indianapolis practice squad. Burton has spent time with five teams in three seasons after going undrafted out of Kansas State in 2017. ... S Jeff Heath was a full participant in practice Wednesday after missing the Detroit game with shoulder injuries.