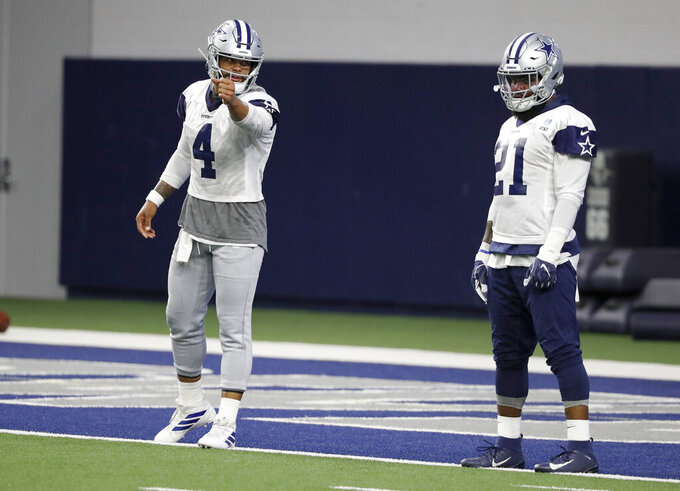 Dallas Cowboys' Dak Prescott (4) gestures towards running back Ezekiel Elliott as they participate in drills during a work out at the team's NFL football practice facility in Frisco, Texas, Thursday, Sept. 5, 2019. (AP Photo/Tony Gutierrez) 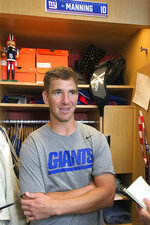 ARLINGTON, Texas (AP) — The rookies will have to wait, since star running back Ezekiel Elliott finally ended his long holdout with the Dallas Cowboys and Eli Manning is still the quarterback for the New York Giants.

Elliott signed a $90 million, six-year extension just in time for Sunday's opener at home against the Giants, who will send Manning out as the starter for the 15th consecutive season after the heavily debated decision to draft potential heir apparent Daniel Jones sixth overall.

During Elliott's absence that covered all of training camp and the preseason, rookie Tony Pollard was impressive enough for the Cowboys to decide he was their second-best back. Now the fourth-rounder out of Memphis will fill the role Dallas hoped for all along: backup to the two-time NFL rushing champion.

"We are all about as expert as we can get about what Zeke means and how we are built to compete for the main goal we got," owner Jerry Jones said of the defending NFC East champs, who will try to get past the divisional round of the playoffs for the first time in nearly 25 years. "This is an important contract for us."

It remains to be seen if Manning's club-record 16th season will be similar to his first, when he replaced Kurt Warner after nine games and went on to start every game but one for 14 full seasons. Jones, criticized widely after the Giants made the surprising pick, had the NFL's best preseason passer rating (137.3).

But Manning is still the guy 10 years after winning the first regular-season game at the home of the Cowboys, and supposedly leaving his signature on the wall, noting the score (33-31) along with the fact that it was the first game in the $1.2 billion showplace.

"They mean a little bit more, throw in that we always seem to play them the first game of the season, is always important because it's the first one," said Manning, a two-time Super Bowl winner facing Dallas in the opener for the sixth time in the past eight seasons. "There's a lot of special memories in playing the Cowboys."

Here are some of the story lines with the Cowboys seeking a fifth straight win against the Giants, which would be the fifth streak at least that long for Dallas in a series set for its 115th meeting:

No one expected much from New York's offense this season with the trade of Odell Beckham Jr. to Cleveland. New York moved the ball well in the preseason with Manning playing a few series, tight end Evan Engram playing one and dynamic halfback Saquon Barkley and top receiver Sterling Shepard (broken thumb) none. All are ready for the season.

New York's nine TD passes in the preseason were a league high, along with its points (119), average passing yards (305.5) and total offense (393). Does it carry over? Veteran Golden Tate III is suspended for the first four games for violating the policy on performance enhancers.

NEXT STEP FOR DAK?

Only New England star Tom Brady (35) has more regular-season wins than Dallas quarterback Dak Prescott (32) since the 2016 NFL Offensive Rookie of the Year entered the league. He has his fellow first-year star back in Elliott, and is coming off his first offseason with receiver Amari Cooper, a midseason trade acquisition last year. Prescott got his first playoff win last season, following a second NFC East title in his three seasons — all with Elliott. Now ,the Cowboys want more.

"I don't think those hopes or anything changed while he was gone," Prescott said. "We were all pretty faithful that this was going to happen. Now that he is back here, you put all the pieces together, working a little bit more, getting those quality reps that we need."

Manning and Cowboys tight end Jason Witten will set the same club record when they take the field: 16 seasons with their respective teams.

The difference is Witten missed last season, giving broadcasting a one-year try before coming out of retirement.

"I feel better about that decision today than when I made it back in March," Witten said. "The reason for that is because that I know that I'm ready."

The Giants had trouble putting pressure on quarterbacks and stopping the run last season. The run defense should be better with first-round draft choice Dexter Lawrence II in the middle of the 3-4 front. Linebackers Tae Davis, Lorenzo Carter and Markus Golden are keys to the pass rush. First-round draft pick DeAndre Baker and veteran Janoris Jenkins are good cover cornerbacks.

The Cowboys have a defense with several emerging young stars, but with four starters who barely practiced in the preseason. DeMarcus Lawrence was coming back from shoulder surgery, while fellow defensive end Tyrone Crawford and cornerback Byron Jones dealt with hip issues. Linebacker Sean Lee injured a knee early in camp.

Giants center Jon Halapio will be playing in a regular-season game for the first time on the same field where he broke his lower right leg and ankle against Dallas on Sept. 20. He has no fears returning to AT&T Stadium.

"I'm excited more than anything," he said. "Can't wait to get out there and play again."