Elway insists Flacco is still in his prime at age 34 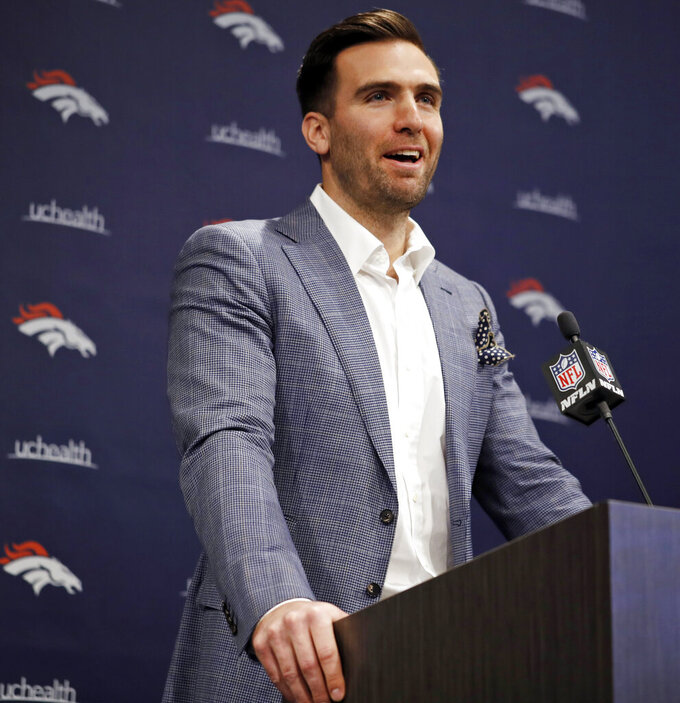 ENGLEWOOD, Colo. (AP) — John Elway insists Joe Flacco is at the top of his game at age 34 even though the former Baltimore Ravens quarterback hasn't thrown a pass in the playoffs since 2015.

"Joe is a perfect fit for us," Elway said at Flacco's introductory news conference Friday. "He's played in a lot of big games, he has a lot of good football left in him. At 34, (I) feel like he's just really coming into his prime."

That echoed comments Elway made Wednesday when he told the NFL Network that Flacco's "arm strength is still great" and "he's just going into his prime," even though the veteran QB was supplanted by rookie Lamar Jackson last season and didn't play in the Ravens' wild-card loss to the Chargers.

Elway, who sent a fourth-round pick to Baltimore for Flacco in a deal worked out five weeks ago, trusts he's finally found a worthy successor to Peyton Manning — another Super Bowl winner who came to Denver for the second chapter of his storied career.

Flacco said he'd love to reach out to Manning as he tries to follow his lead in Denver.

"I am new to this. It's completely different and obviously I'm going to find my way through it mostly on my own," Flacco said. "But ... it would probably be a huge benefit to talk to somebody like him, who has not only gone through it but has been successful."

It also appears Elway is trying hard to sell his latest quarterback acquisition to an antsy and skeptical fan base that has suffered through Mark Sanchez's flop, Trevor Siemian's fall, Brock Osweiler's flounder, Paxton Lynch's fiasco, Case Keenum's failure and Chad Kelly's flameout in the three years since Manning retired.

"I definitely feel that way," Flacco said of being in his prime. "So, it feels good to hear somebody say that. I mean, shoot, with Tom Brady now quarterbacks are playing until they're about 60 years old."

Flacco, who's 7½ years younger than Brady, said he's healthy and hardy and can't wait to get going.

"I'm as healthy as I can be, as a physical and ready to go as ever," Flacco said. "So, I'm excited about what lies ahead for me and my future. I'm not putting a number on how much I've got left to play. I'm going to play as long as I can and hopefully they're dragging me out of this building a long time from now."

Flacco missed just six games in his first decade in the NFL and was Baltimore's starter last season until he injured his right hip in a loss at Pittsburgh on Nov. 4. Jackson took over and went 6-1 to get the Ravens into the playoffs for the first time since the 2014 season.

"If I have to reflect back on that time in Baltimore, it was not very fun. It was miserable sitting there on the bench and not being able to contribute, not really feeling like you're a part of the team," Flacco said. "But if that's what it takes to be in this situation right now and be as excited about it as I am and my family is, then that's what it takes."

The Ravens went 106-72 with Flacco as a starter, including the postseason, where his 10 playoff victories since 2008 rank second behind Brady among active quarterbacks. Nobody has more road playoff wins than Flacco's seven.

"As we recall, there was one four or five years ago that was pretty painful here in Denver," Elway said of Baltimore's 38-35 win in double-overtime over the AFC's top seed on Jan. 12, 2013, "and hopefully we'll have a lot more of those miracles on our side this time rather than against us."

Flacco heaved a 70-yard touchdown pass to Jacoby Jones in the final minute of regulation when safety Rahim Moore mistimed his jump while going for the interception instead of the tackle. That play represents the Broncos' Bill Buckner moment and it propelled the Ravens to their second Super Bowl title a month later.

Flacco said he's still driven by his love for the game, not by his disappointing end in Baltimore.

Notes: The Broncos re-signed TE Jeff Heuerman to a two-year deal worth about $9 million.