Elway says QB Lock not ready to return to action 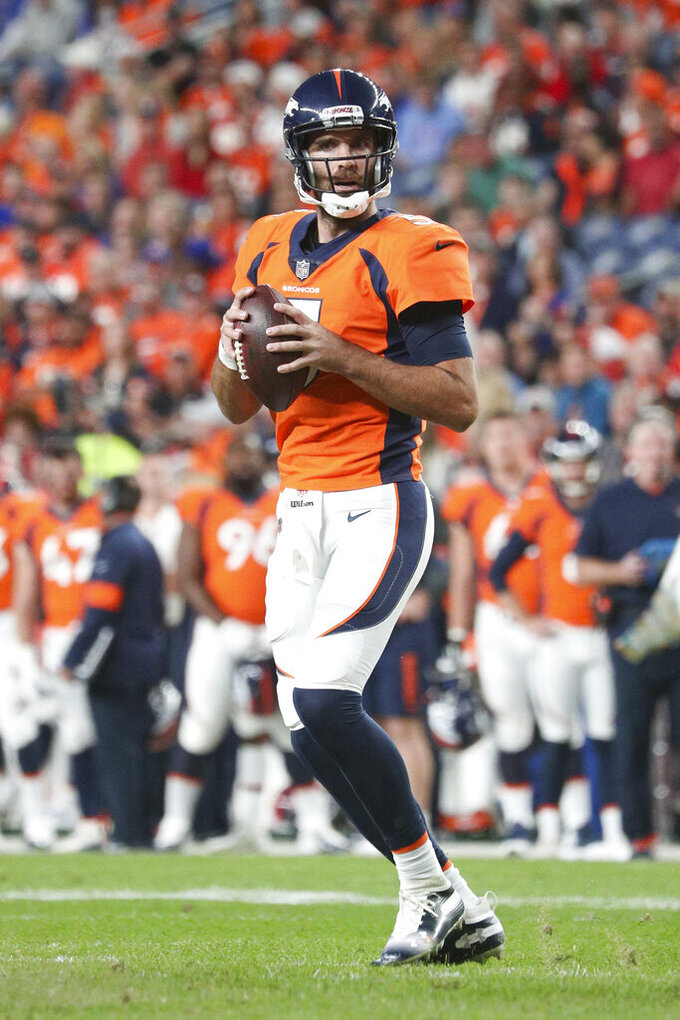 Denver Broncos quarterback Joe Flacco (5) looks downfield for a receiver in an NFL game against the Kansas City Chiefs, Thursday, Oct. 17, 2019, in Denver. The Chiefs defeated the Broncos 30-6. (Margaret Bowles via AP)

ENGLEWOOD, Colo. (AP) — With the Broncos off to a 2-5 start and trading away Emmanuel Sanders, fans are pining for rookie quarterback Drew Lock to get a chance to run Denver's offense.

Looks like they'd better get used to Joe Flacco being under center.

General manager John Elway said on his weekly 850 KOA radio show on Wednesday that Lock isn't ready to return to action after spending all season on IR with a sprained right thumb.

"The most important thing with a young quarterback is not to put him out there before he's ready," Elway said. "... If you don't put him in a situation where he has a chance to be successful and he's not successful, the whole roof will cave in."

Elway added that he's not sure when — or if — Lock, a second-round pick out of Missouri, will play this year.

"He is not ready to go right now, I will tell you that," Elway said, adding he hopes Flacco can "get this offense going and put some points on the board."

The Broncos are averaging about 16 points a game and Flacco was sacked a career-high eight times in Denver's 30-6 loss to Kansas City last week.

Lock went on IR Sept. 2 after spraining the thumb on his throwing hand in the preseason. He would be eligible to come off IR after eight weeks.

He's eligible to return to practice this week along with running back Theo Riddick (shoulder) and tight end Jake Butt (knee), but coach Vic Fangio said he isn't going to practice any of them this week.

Teams can bring two players back off IR. Elway said this week that receiver Tim Patrick (hand), who went on IR Sept. 11, will be among them.