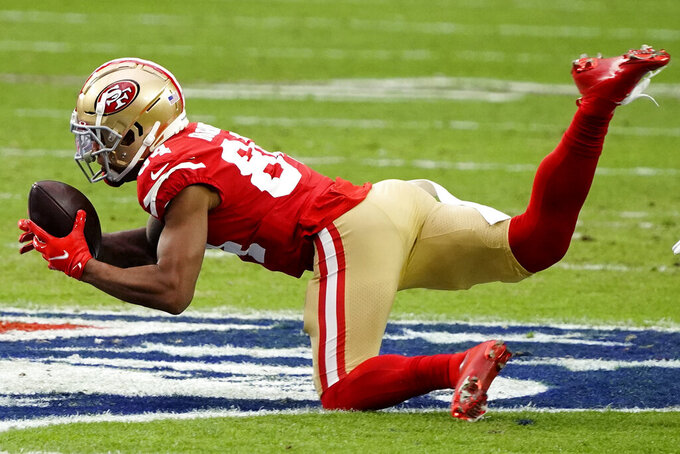 FILE - San Francisco 49ers wide receiver Kendrick Bourne (84) pulls in a catch during the first half of an NFL football game against the Washington Football Team in Glendale, Ariz., in this Sunday, Dec. 13, 2020, file photo. The Patriots have agreed to terms on a new three-year, $22.5 million contract with free agent receiver Kendrick Bourne. His agent, Henry Organ of Disruptive Sports, says the new deal is for three years and could be worth as much as $22.5 million. New contracts can't officially be signed until the new league year begins on Wednesday, March 17, 2021.(AP Photo/Rick Scuteri, File)

During his four NFL seasons in San Francisco, the 25-year-old receiver developed a perception from afar about a “stuck up” franchise that won often but appeared to do so devoid of joy and levity.

It didn’t take long at all for those notions to melt away after he signed on to be part of the Patriots’ growing free agent class that will be tasked with erasing the sting of a humbling 7-9 season in 2020.

“The first day in the building, I could feel how natural our connection was between the players, the first time meeting each other,” Bourne recalled Monday. “It was just natural energy, positive energy.”

He left that day with a new sentiment.

“They’re going to turn it around in one year. I can honestly see it,” Bourne said. “I think it’s going to be an awesome year. And I can’t wait."

Welcome to the New England Patriots’ new beginning, in which one of the league’s notoriously frugal regimes has suddenly become one of its biggest spenders.

New England entered free agency with about $69 million in salary cap space, behind only Jacksonville ($74 million) and Indianapolis ($71 million).

As of Monday, the Patriots have already made 22 transactions since the new league year began on March 17, coming to agreements with 19 free agents and adding another via trade.

That group is collectively guaranteed about $175 million in salary over the life of their contracts, a number roughly equal to what team owner Robert Kraft paid to acquire the team in 1994.

The spending spree gives new additions such as former Eagles defensive back Jalen Mills, who signed a four-year, $24 million deal, lots of confidence.

“It goes to show that they not only believe in us as individuals, but they believe in the guys that were signed and the team that they we already have,” Mills said. “Those additions and also with the draft coming up, we’re going to make a difference. And that’s all you want as a player.”

New England has been the beneficiary of a free-agent market saturated with talent because of the reduction in the league’s salary cap because of the revenue lost last season because of COVID-19. It left many teams with fewer dollars to spend. Those — such as the Patriots — who did have cap space, are contending with fewer competitors.

It’s a sign that the six-time Super Bowl champions are focused on putting 2020 far behind them.

In an interview with NBC Sports, Kraft, likened this offseason to the spectating in the stock market.

“You take advantage of corrections and inefficiencies in the market when you can, and that’s what we did here,” Kraft said.

What it’s netted them is a group that on paper fills in the gaps that were most glaring during last season, which marked the Patriots’ first time at home for the playoffs since 2008.

Quarterback Cam Newton is back on a one-year deal following a spotty first season in which pandemic restrictions robbed him of participating in an offseason program. He also struggled in the passing game without experienced or dependable receivers.

That should be improved with the additions of Bourne and Nelson Agholor at receiver, as well as tight ends Jonnu Smith and Hunter Henry.

Henry said he’s already spoken with Newton and worked out Monday in California with Jarrett Stidham, who served as the backup to Newton last season.

Henry said he thinks he and Smith “complement each other in a huge way.”

“I feel like they kind of put the tight end on the map again,” Henry said of the Patriots’ history at the position. “How they use the tight end. How the offense uses the tight end. ... I’m very excited.”

While Kraft has had no problem opening the checkbook this offseason, he says the real work is yet to begin.

“We’ll see,” he told NBC Sports. “Nothing is guaranteed, and I’m very cognizant of that. But we’re not in the business to be in business. We’re in this business to win.”