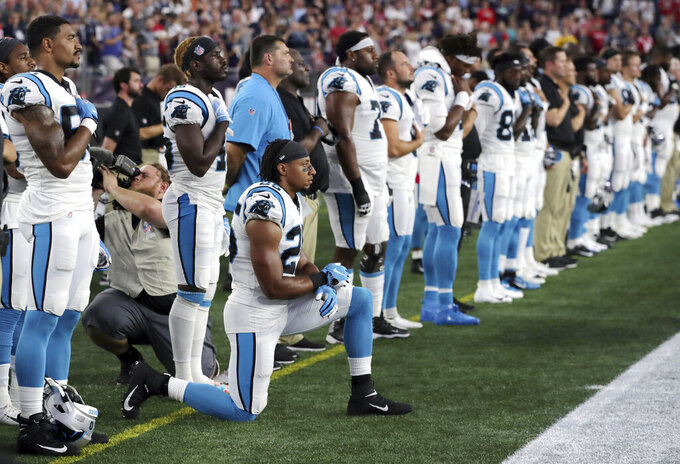 FILE - In this Aug. 22, 2019, file photo, Carolina Panthers strong safety Eric Reid (25) kneels during the national anthem before the team's NFL preseason football game against the New England Patriots in Foxborough, Mass. Despite setting two defensive franchise records for the Panthers last season, Reid remains unsigned like his close friend Colin Kaepernick. Washington coach Ron Rivera, Reid’s former coach in Carolina, gave him a strong endorsement Wednesday, Sept. 16. “I would tell them he’s a heckuva teammate,” Rivera said. "He came in and the young man did exactly what was asked of him." (AP Photo/Charles Krupa, File)

Reid told The Associated Press on Wednesday he has not received any offers nor been invited for a visit by any team since the Panthers released him in March. The 28-year-old safety had 130 tackles, four sacks, six passes defended, two fumble recoveries and a forced fumble in 2019. The tackles and sacks are the most by a Panthers safety in one season.

“I would tell them he’s a heck of a teammate,” Rivera said. "He came in and the young man did exactly what was asked of him. He was not an issue. I will say this, too. He’s a young man who really, truly helped me understand the entire movement that’s going on right now. He’s a heck of a young man. I’ll tell you that much.

“We’re in a fortunate position where we have Landon Collins. A guy like Eric Reid wouldn’t fit us here. But if we didn’t (have Collins), believe me, I’d call him. I think he’s a guy that has the ability to play in this league and hopefully, if somebody needs a strong safety, he’s a guy they would call.”

The admiration is mutual.

“I enjoyed playing for Coach Rivera,” Reid told the AP in a text message. “He’s the real deal. He has that reputation for a reason.”

A first-round pick by San Francisco in 2013, Reid went to the Pro Bowl his rookie season. He joined with Kaepernick in 2016 when the former star quarterback took a knee during the national anthem to protest against police violence, racism and social injustice.

Kaepernick hasn’t played in the league since that season and Reid sat out the first three weeks of the 2018 season before Carolina signed him. Both players filed collusion grievances against the NFL and settled their cases in February 2019.

Reid has also been a vocal opponent of the NFL’s new collective bargaining agreement. In March, he called for an investigation and a re-vote over language added following ratification of the pact.

Reid could easily argue he’s being blackballed because of his criticism of the league and the NFL Players Association.

“I wish we had listened earlier, Kaep, to what you were kneeling about and what you were trying to bring attention to,” Goodell said. “We had invited him in several times to have the conversation, to have the dialogue. I wish we had the benefit of that, we never did. We would have benefited from that, absolutely.”