Erratic Rams running out of time to find consistency 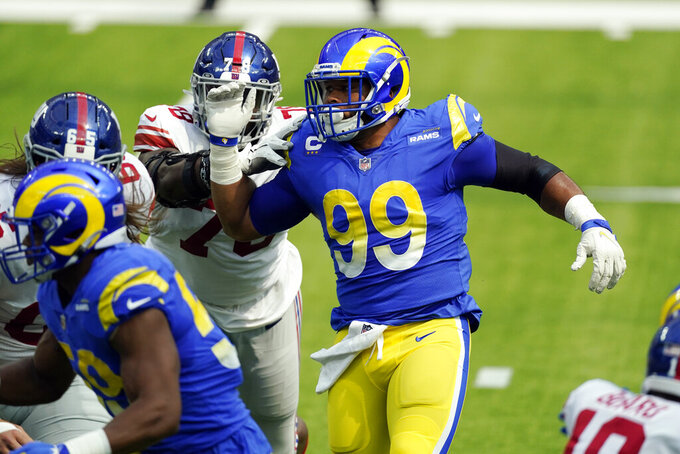 They’ve found it, but not in the way McVay wants.

The Rams head into a critical NFC West game at Seattle on Sunday having won their past four games against teams with winning records. They have also lost three straight against teams with losing records, including a defeat to the previously-winless New York Jets last week that leaves them with no margin for error if the Rams want to claim a division title.

“To get to where we are trying to get to, you know, and get to the playoffs and play to win it all, we got to be more consistent as a team overall,” defensive tackle Aaron Donald said Thursday. “That’s on all of us from offense to defense to special teams."

If they win their final two games against Seattle and Arizona, the Rams (9-5) would be assured their third division title in four seasons with McVay in charge because they would have swept the season series against the Seahawks (10-4). To get it, they will have to play much better than they did in the sleepy 23-20 loss to the Jets.

Most of the postmortem following that game has focused on quarterback Jared Goff and an offense that produced 97 yards in the first half before stalling out in opposing territory in the fourth quarter. However, Donald said the defense wasn’t without blame.

The Rams failed to force a takeaway, allowed the Jets to convert on 7 of 17 third downs and weren’t able to stop them from running the final 3:54 off the clock. As Donald put it, they failed to “dominate” in the way the defense expects to every game.

“So we just have to be prepared, play better than we did last week, play more consistent so that everybody is on the same page. And if we do that, we know what we can do as far as the defense,” Donald said.

The standard they expect was met in the 23-16 win over the Seahawks in Week 10, as the Rams intercepted Russell Wilson twice, recovered a botched snap when he tried to extend a play and sacked him six times.

Donald and his teammates were able to focus their attention on Wilson as the Seahawks did not have their top two running backs, Chris Carson and Carlos Hyde, available because of injuries. They will play this time, which means the Rams will have to contend with a more balanced offense.

“They got two more of their playmakers on their team so, obviously, things are gonna be a little different for them as far as what they want to do in running the ball,” Donald said. “We know what to expect. We’ve played these guys before so we got a feel for what’s gonna happen, what’s gonna be coming our way.”

While there are tweaks to the game plan to make, the main focus is on getting away from the erratic changes in performance that have characterized the Rams’ season so far. McVay believes the loss to the Jets might be exactly what they need.

“Sometimes those tough losses with the right teams can come at a moment where you can create a sense of urgency that’s required and certainly this week is a big game for us,” McVay said.

NOTES: RT Rob Havenstein remained limited in practice because of a neck injury, but McVay expects he will play against the Seahawks. … LB Natrez Patrick (illness) did not practice. … The Rams worked out at SoFi Stadium because of high winds at their facility in Thousand Oaks.