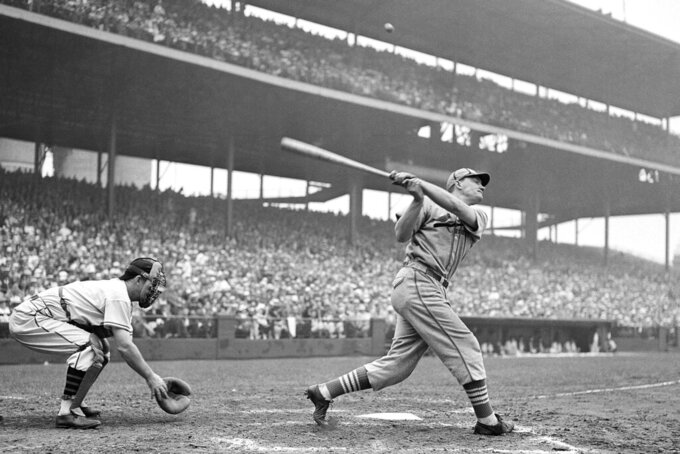 FILE - In this 1936, file photo, Johnny Mize of the St. Louis Cardinals swings during a baseball game. (AP Photo/File)

What is America's game?

Is it the quirky and cerebral sport that, in its highest form, is unfolding this week in the World Series between the Houston Astros and the Washington Nationals? Baseball is, after all, still called the national pastime.

Is it the gladiatorial battle that unfolds on any given Sunday (and Monday and Thursday), the one that channels raw male power into accomplishments measured in yards and completions and high-octane collisions? Former star wide receiver Jerry Rice thinks so; a new book about the NFL that he co-authored, out next week, is called "America's Game."

Or is it the acrobatic contest with the big orange ball, the one in which players dwarfed only by their global online star power hurtle through rare air, putting on nightly clinics to demonstrate what the human body can do? There's a strong case to be made there, too.

Our history is contained in our games. Big league baseball, NFL football and NBA basketball — the holy trinity of American athletics — each grew to maturity during different periods in the nation's history. And each emerged in an era that reflects the place it came to occupy in the culture.

In a season when the NFL turns 100, and in a week when the World Series has claimed the national spotlight and the latest NBA season is being born, let's ask the question: What is America's game, anyway?

Baseball is America's game: the America that was stitching itself together in the first half of the 20th century and becoming a national mass culture.

In that century's first decade, the people who ran the game called baseball put together a commission to determine its origins. In retrospect, though, at a time when being American was more of a thing than ever before, it ended up being an exercise in candy-coating baseball with myth — Abner Doubleday, Cooperstown, 1839 — to prove it was an American game.

It wasn't entirely, of course; it evolved from many things, from multiple places, and the musty "Doubleday Myth" was upended decades ago. But whatever its origins, baseball became indomitably American as it grew with the nation throughout the first half of the 1900s.

Like the country at the time — that time being 100 years ago this month, the time of the Chicago "Black Sox" gambling scandal — baseball was trying to figure out the intersection between the profit motive and the pure.

And like the country at the time, it was increasingly urban and complex but explicitly framed itself as pastoral and simpler — a potent draw to the millions of immigrants and migrants who were transitioning from rural life to an industrialized society where everything (except baseball) was marked by a ticking clock.

"The only green they're going to see is on the baseball field," says Jerald Podair, a historian at Lawrence University in Wisconsin and author of "City of Dreams: Dodger Stadium and the Birth of Modern Los Angeles."

Today, though baseball has the strongest of anchors in Latin America and is the stuff of obsession in Japan and Taiwan and South Korea, it is America, still, where the "World" Series is the pinnacle of the sport — even though it has only busted out of America's borders two times, each with the Toronto Blue Jays.

And it is still America where a constant refrain about "the integrity of the game," which rises each time a change is made, reveals a purism that some say is pushing baseball toward irrelevance.

"Baseball has to shoulder a heavy burden," says Patricia O'Hara, who for years taught a course at Franklin & Marshall College in Pennsylvania on baseball in American literature and culture, and more recently wrote a play called "Banned from Baseball," about Pete Rose.

"Why do we project impossible ideals onto a sport?" she wonders. "Maybe that's the question."

Football is America's game: the America that roared out of World War II and into countless suburbs, armed with TV sets, ready to engage, flush with the confidence that comes with realizing you are the most powerful nation in the world.

Football is battlefield poetry, the civilian made military, an American aesthetic if there ever was one. It is John Facenda narrating NFL Films episodes like 1978's "Mighty Men and Magic Moments" in a stentorian voice that spoke to American men ravenous for vicarious weekend glory. It's a made-for-TV experience that many people think is better on a screen than live — to the point that, in 1966, an advertising company started distributing, in American hardware stores, a 64-page booklet called "How to Watch Pro Football on TV."

It is the sport of the height of the "American Century," that postwar, Cold War moment when TV grew up, propelled in notable part by two giants — the "Living Room War" in Vietnam, and the rise of the NFL to dominance. The league colonized Sundays, then used its video Manifest Destiny to grab the next day as well with its crowning, prime-time achievement: Monday Night Football.

"It was the perfect sport for the Cold War. It created the American male as a heroic figure. 'Look at our men. Look at how tough they are,'" says Rich Hanley, who co-directs the sports studies program at Quinnipiac University in Connecticut and teaches courses about the history of football.

"It's football as an American projection of its strength," he says. "NFL Films is showing this violence in slow motion, and people are loving it. The violence is appealing to people. It's controlled, it's rules-based. So, it fits the American ideal — we're free, but we're free within a certain set of rules."

Football is the notion that power, used in the right measure in the right places, can break through and triumph. Football is the acceleration from the early 20th century — the Red Grange years — to the NFL's explosive young adulthood in the 1960s and 1970s. It's Johnny U leading the Colts across the field with a brush cut straight from Floyd's in Mayberry, then giving way to Broadway Joe and O.J. Simpson deploying commercials and movies to plant the seeds of modern athlete-celebrity culture.

Football is the recliner and the remote and the canned beer, all of which came of age in postwar America.

"It carries a very American philosophy of getting up again and again after being knocked down," former NFL player and coach Raymond Berry once said. "It is a very physical sport that not many other nations have really anything similar. So, I think it is a very good reflection of the American mentality."

Basketball (yeah, yeah, invented by a Canadian-American) is America's game: an America gone 21st-century global, powered by messages from invisible sources that instantly carry its acrobatics and outsized personalities to the planet's every corner.

Basketball is a fast-paced, airborne conversation about race, about commercialism, about globalization (Exhibit A: China) — but all, still, from a very American perspective.

Basketball is America's penchant for improvisation and workarounds — Kareem inventing the sky hook when the NCAA outlawed the dunk for a decade. Basketball is generations of players — African American men in particular — passing ideas and skills down, person by person.

"It's anybody's game," says Frederick Gooding, an assistant professor of African American studies in the honors college at Texas Christian University (and a baller). "You have a Michael Jordan inspired by Dr. J. And you have a Kobe inspired by Jordan. Who knows who's next?"

Basketball, as the NBA saw early on, is selfie culture personified, with spectators able to see not baggy uniforms or helmets and pads but shorts and tank tops and earrings and tattoos and sinew and unremitting bursts of individuality.

"The people who have the temerity to even take these risks are those who come from mostly impoverished conditions where they are under resourced," Gooding says. "So, their whole mindset is, 'I'm gonna do what it takes — this is me, and you're going to have to deal with it.'"

Basketball manages to be kinetic and chaotic but also finely tuned and portable. Pickup baseball takes at least eight or 10 for a decent game, football needs four or six even in your backyard. But basketball? Two people, a ball and a makeshift hoop: From West Africa to China, Bolivia to Samoa, that's all you need. Basketball is about riches and fame, but it's within the reach of anyone in any economic stratum.

And basketball is, at least in its NBA incarnation, vigorous and unabashed individualism — for better and worse, perhaps the most American trait of all.

"Basketball is a team sport that can be controlled by one athlete, by one individual, in a way that most other team sports don't allow," says Chad Carlson, who teaches kinesiology at Hope College in Michigan and is the author of "Making March Madness: The Early Years of the NCAA, NIT and College Basketball Championships."

"Basketball," he says, "has this individualized element to it that I think fits with stardom, the way in which we're infatuated with superstars."

Thus, basketball is the perfect sport for the 21st-century mandate of virtual fame — of personal branding and social media, of Instagram and Snapchat and Nike marketing power. Thanks in part to the prescience of NBA officials who saw opportunities years ago in players' personal branding, the top five NBA player Instagram accounts — LeBron and Steph and Kyrie, Dwyane Wade and Russell Westbrook — claim more than 100 million worldwide followers among them.

That means they're being watched around the world by more than the entire populations of Florida, Texas and California combined.

OK, GO AHEAD AND YELL NOW

Wait, you're saying. These are sweeping generalizations. Of course they are. Each sport has such nuance, such detail, such elegance — that's why its adulators can never get quite enough.

The numbers, according to Gallup, say this: Football, while slipping, is still Americans' favorite sport to watch. Basketball comes in a distant second, while baseball — coming in third, and often criticized for being outmoded in today's world — is looking over its shoulder at soccer, according to polling from last year.

W.P. Kinsella, in his novel "Shoeless Joe," said this about baseball: "America has been erased like a blackboard, only to be rebuilt and then erased again. But baseball has marked time while America has rolled by like a procession of steamrollers."

The funny thing is, that could easily be said about football — and, in recent years, about basketball. We have all three, and they're not going away anytime soon. World Series? Tune in tonight. NBA? Same deal. NFL? Enjoy its centenary and get ready for more.

"Humanity has a seemingly unquenchable thirst for consuming sports," Carlson says, and "America is the place that popularizes sports in the way that other countries don't."

Tell that to the planet's Manchester United fans and you might get an argument. But as with Hollywood, as with Madison Avenue, as with the saga of the frontier, even, sports in America have become an epic tale so sewn into the culture that it's sometimes hard to discern where the games end and other things begin.

Which is America's game? All of them, of course: America's game reflects a swath of who the nation is — at the time. The answer was obvious from the beginning. But you knew that already, didn't you?

Ted Anthony, director of digital innovation for The Associated Press, writes about American culture. Follow him on Twitter at @anthonyted.