Even with Thielen and Diggs, Vikings need another go-to WR 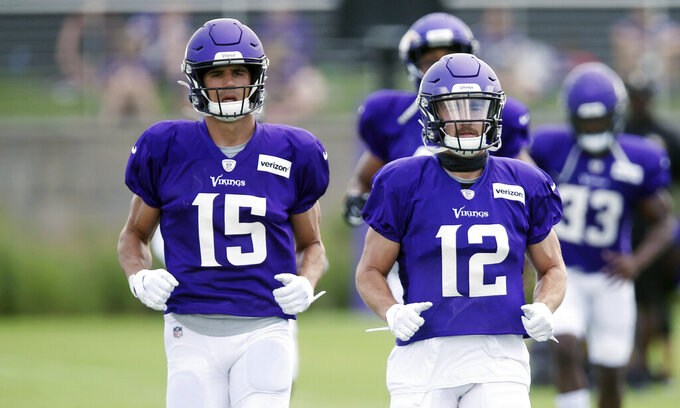 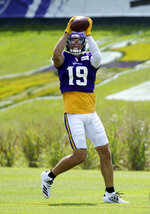 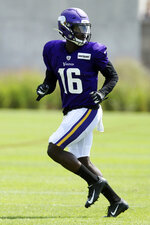 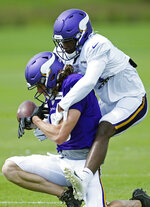 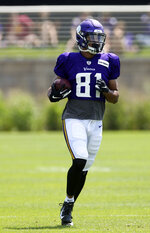 With Thielen and Diggs, the Vikings were also one of only four teams with two members of the 1,000-yard club last year. They ought to be set then at wide receiver, right, with those time-worn training camp competitions for playing time mostly taking place at other positions?

Well, not so much in the passing-oriented NFL these days, a necessity of having at least three starting-caliber players available the Vikings were reminded of during the fade by the offense during the second half of last season.

So even though they can lean on established excellence at the top of their wide receiver depth chart, the Vikings have likewise embarked this summer on a critical task of developing the rest of the group so another go-to target can emerge for quarterback Kirk Cousins.

For Chad Beebe, Jordan Taylor, Laquon Treadwell, Brandon Zylstra and a handful of under-the-radar rookies, the opportunity is, no pun intended, wide open.

"I think it's a great mix of talent in that room. They come in all shapes and sizes, so we kind of just try to focus on what the guys do well," offensive coordinator Kevin Stefanski said.

If draft picks automatically panned out the way teams projected them to, this spot would already be sewn up by Treadwell. The 2016 first-round selection has struggled with injuries and confidence over his first three years and not displayed enough speed and instinct to consistently run open routes. Though Treadwell posted career bests in 2018 with 35 receptions and 302 yards and one touchdown last season, the willingness of Cousins to throw his way on key plays was not rewarded with nearly enough production.

Beebe, just as Thielen did six years ago, landed on the practice squad after using the rookie tryout camp to latch on in the spring. Then he was elevated to the active roster and caught three passes in his debut against Detroit before missing four games with a hamstring injury. Though he's only 5-foot-10, his skills have flashed enough potential to stay firmly in the mix for a significant role in the new scheme under Stefanski and offensive adviser Gary Kubiak.

"My strengths revolve around my quick twitch. I'm not the biggest guy. I'm not the fastest straight-line guy," Beebe said. "But side to side I can move pretty well."

Zylstra, who like Thielen is a native of Minnesota, came from the CFL last year and made the team out of training camp as, primarily, a special teams coverage man. He was removed Monday from the physically unable to perform list, after recovering from a hamstring injury, putting himself back into the competition.

As for the transition from the longer and wider playing surface in Canada, well, that proved to be steeper than he anticipated.

"That just speeds up all the players, just putting everybody in a tighter environment," Zylstra said. "It speeds everybody up, so when you come out of your breaks, it always seems like there's a defender in your face, versus the CFL where you had a little bit of space to work."

Taylor signed as a free agent, after spending four years with Denver. Double hip surgeries kept him off the field for the entire 2018 season, but the 6-foot-5 Taylor has brought prior knowledge of the concepts and preferences that Kubiak has infused into the system, having played under him with the Broncos.

"It obviously is an advantage, for sure. These other guys are doing a great job of learning the offense as well, but just being able to play multiple positions if need be, I think, can only help you," Taylor said.

"They have not been precise enough in these first couple days, these young receivers," Zimmer said Sunday. "They need to get their rear end in gear."

For everyone in the mix except perhaps Treadwell, the first-rounder, there is plenty of motivation to become the next Thielen or Diggs, the two originally overlooked prospects and now self-made stars.

"They're just gamers, and I love that about them," Beebe said. "So just to be able to watch them day in and day out and see what they do, that's something that I would be crazy not to try to do the same."