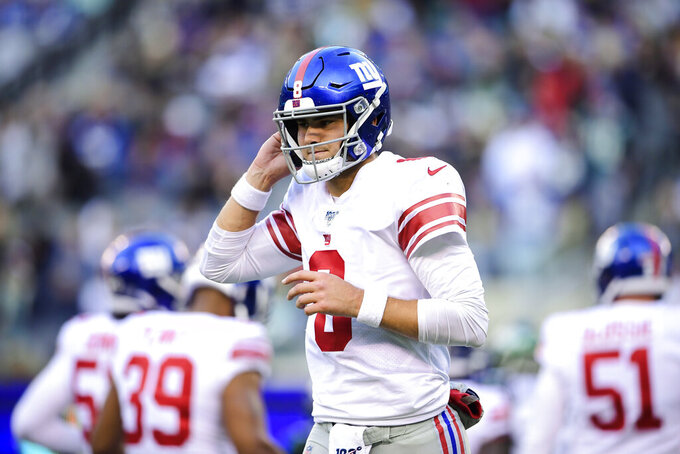 EAST RUTHERFORD, N.J. (AP) — Sam Darnold and the New York Jets are feeling a whole lot better about themselves — and their prospects for this season — after a gritty win.

Even if it came against the equally lowly Giants.

Le'Veon Bell scored a go-ahead 1-yard touchdown early in the fourth quarter after a 33-yard pass interference penalty on DeAndre Baker, and the Jets rallied and then held on to beat Daniel Jones and the Giants 34-27 on Sunday for Big Apple bragging rights.

"We needed that one," Darnold said.

Darnold threw a touchdown pass to Jamison Crowder and ran for another score, and Jamal Adams scored on a 25-yard fumble return on a strip-sack as the Jets (2-7) bounced back from an embarrassing 28-16 loss last week at previously winless Miami. It also snapped a three-game skid, during which the seat under coach Adam Gase had grown increasingly hotter.

"We need every win from now on," said Darnold, who was 19 of 30 for 230 yards and no interceptions. "We've still got a chance. I mean, if we got on a roll here and win out, we've got a chance at the playoffs. Guys in this locker room know this."

The postseason seems little more than a pipe dream at this point, but the Jets are suddenly optimistic again.

"Today was not nearly a perfect game," Bell said, "but it was good enough for us to win."

Jones threw a career-high four touchdown passes, two each to Darius Slayton and Golden Tate, but couldn't prevent the Giants (2-8) from losing their sixth straight game. It's their first six-game skid since 2014, and has some frustrated Giants fans calling for Pat Shurmur's job.

Saquon Barkley had the worst game of his young career, finishing with just 1 yard on 13 carries. He also had five catches for 30 yards.

"I just have to get better," said a curt Barkley, who was seen going to the X-ray room after the game but wouldn't discuss it.

"It makes it a lot easier when you make the other team one-dimensional and take away their biggest threat," Jets linebacker Brandon Copeland said.

With the Giants trailing 21-19 in the third quarter, Jones marched them down the field on nine plays, capped by a 15-yard touchdown pass to Tate.

Shurmur opted to go for a 2-point conversion and Jones found Bennie Fowler III in the end zone to put the Giants ahead for the first time, 27-21 with 5:21 left in the third quarter.

Sam Ficken's 53-yard field goal late in the third quarter cut the Jets' deficit to three. The drive was kept alive by Darnold's 24-yard run — the longest rush for the Jets this season — on third-and-7.

The Jets retook the lead on Bell's short touchdown run 8 seconds into the final quarter. After a 25-yard catch by Crowder, Darnold threw a deep pass to Robby Anderson and Baker was called for pass interference in the end zone — a 33-yard penalty that put the ball at the 1.

Darnold gave the Jets an early lead by running it in from 2 yards out, capping a 13-play, 75-yard drive.

On New York's next drive, Gase opted to go for it on fourth-and-1 from the 41 and rookie tight end Trevon Wesco ran for a 2-yard gain. Four plays later, Darnold fired a strike to Crowder for a 23-yard touchdown to make it 14-0.

Jones, who finished 26 of 40 for 308 yards, got the Giants moving on their next drive, helped by three penalties on the Jets. On first-and-goal from the 5, Jones connected with Slayton to cut the Giants' deficit to 14-7 early in the second quarter.

Jones found Slayton again for a TD later in the quarter when Shurmur opted to go for it on fourth-and-4 from the Jets 39.

With the Giants looking to tie it, holder Riley Dixon picked up Zak DeOssie's wayward snap on the extra point, but his throw to Kaden Smith for the 2-point conversion attempt fell incomplete to make it 14-13 with 5:24 left in the half.

Adams gave the Jets a 21-13 lead just three plays into the second half, when he ripped the ball out of Jones' hands and ran it into the end zone 25 yards for a touchdown.

The star safety told Gase on the sideline shortly before the play that he was going to cause a turnover.

Jones threw a screen to Tate for a 61-yard touchdown in the third quarter and the Giants went for the 2-point conversion — but Tate was called for offensive pass interference.

Shurmur then opted for the extra point, but Aldrick Rosas was wide right — and the Jets still led, 21-19.

Jets: RG Brian Winters injured a shoulder in the third quarter and didn't return. ... Bell said he came out briefly with sore ribs, but expects to play next week.

Giants: have a bye-week break before traveling to Chicago to face the Bears on Nov. 24.

Jets: hit the road to take on the Washington Redskins next Sunday.