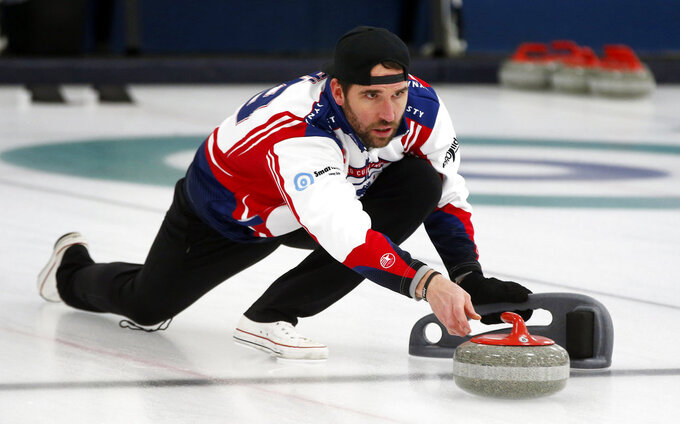 In this Jan. 3, 2019 photo, former Minnesota Vikings football player Jared Allen practices with his curling team for a competition in Blaine, Minn. Allen retired from the NFL in 2015 and wasn't ready to give up on the competition he'd come to enjoy as a five-time All-Pro in a 12-year career. His solution: Make it to the 2022 Olympics _ in curling. Less than a year later, he and three other former NFL players who have never curled before will attempt to qualify for the U.S. championships against curlers who have been throwing stones for most of their lives. (AP Photo/Jim Mone)

Defensive lineman Jared Allen retired from the NFL in 2015 and wasn't ready to give up on the competition he'd come to enjoy as a five-time All-Pro.

His solution: The Olympics.

The problem: He didn't compete in any Olympic sports.

Less than a year later, Allen and three other former NFL stars — none with any prior experience — are attempting to qualify for the U.S. national curling championships against players who have been throwing stones for most of their lives.

It would be the first step toward competing in the 2022 Winter Games in Beijing.

"Every team in the NFL — whether you're hot garbage or the defending Super Bowl champions — every coach come August says the same thing: 'We're trying to win the Super Bowl,'" Allen said. "We come from that mentality, where we set lofty goals.

"Our short term goals are continually to get better: Fundamentals, strategy, sweeping. We know if we master these little things, it will take us a long way."

A 12-year NFL veteran who spent most of his career with the Chiefs and Vikings, Allen was lamenting the end of his playing days when a friend dared him to try an Olympic sport. Allen toyed with the idea of badminton but rejected it as too taxing.

"We thought about curling. It was chill, and the winners have to buy the losers beer," he said. "We thought it was a win-win."

He rounded up former Rams quarterback Marc Bulger and Titans linebacker Keith Bulluck and tackle Michael Roos to form a team; all were Pro Bowl selections during their NFL career, and living near Nashville, Tennessee.

Adopting the name All-Pro Curling Team, they started from scratch in March and kept their plans under wraps until they felt like they had made enough progress.

"We wanted the reaction when we got on the ice to be 'Oh, how long have you guys been doing this?" Allen said in a telephone interview after practicing on a converted hockey rink in Nashville. "We were serious. We didn't want it to seem like it was just some media hype, or just trying to stay relevant."

The first test was in November, when Allen and Bulger — with two "regular" curlers — competed in the Curl Mesabi Classic in Northern Minnesota. Their first opponent: The gold medal-winning team from Pyeongchang led by four-time Olympian John Shuster.

They lost 11-3, giving up five points in the sixth end.

"Honestly, they were a little better than I had expected," said Matt Hamilton, the second on that team. "All in all, Jared was technically pretty sound. But at the end of the day, I've seen thousands of curling shots and situations and that is ultimately going to win us more games."

Although curling matches are often conceded when they are out of reach, the Olympians kept playing through the eighth (of 10) ends, to help the football players gain the experience they'll need if they are going to be more competitive. (If it's any consolation for Allen's crew, Shuster's rink also scored a five-ender against Sweden in the gold-medal match.)

"We had one bad end, and we just kept playing with them. We just wanted to be a sponge," Bulger said. "The key was they knew we were taking it seriously. It wasn't just us saying 'We're going to take over curling,' kind of as a gimmick.

The All-Pros are back at it at the USA Men's Challenge Round this weekend in Blaine, Minnesota, where they are competing for one of four remaining spots in next month's national championships. (Top teams like Shuster's have already qualified.)

They got off to a rough start in their first match, falling 10-1 to Steve Birklid's Seattle-based rink on Thursday night. But, by hopping into the sport early in the Olympic cycle, they have almost three more years before the team for the 2022 Games is chosen.

Hamilton confessed he was put off at first about newcomers thinking they could reach the Olympics in a sport he'd worked a lifetime to master. But he also realized the publicity will be good for curling, which has struggled to break out of its niche as an every-four-years curiosity.

"If I really think I'm that good, I should be like 'Bring it on!'" Hamilton said in an email to The Associated Press from a competition in Japan. "How much they respected the game, though, is what made me realize they aren't making a mockery. We just have some extremely athletic individuals who respect sport but have a need to compete in their blood. Can't disrespect that!"

All four football players agreed the reception they've received from lifetime curlers is decidedly different from a curler trying to break into the hyper-competitive NFL.

Instead, they found the tight-knit but friendly community of curlers was eager to accept them. In their match against the Olympians, there was trash-talking — or banter, depending on whom you ask — and Hamilton even gave them some of his old curling gear.

"I looked at their broom heads and I was disgusted. I was wondering why these former pro football players couldn't afford new broom heads," he said. "So I went into my curling bag and gave them some gently used ones before the game. That really surprised Jared, claiming nothing like that would ever fly in football."

Like many of those who only experience curling every four years on TV, the football players saw the sweeping and the shouting and underestimated how hard it is. "We played football, but it's a lot of muscles we didn't use," Bulger said.

Sliding on the ice was also an adjustment, but the biggest challenge has been the strategy.

When he first started watching, Bulger said, he would see curlers setting up protective stones called guards and thought they were missing their shots.

"We just assumed that you throw to the button every time, and we learned that is not the game," he said. "It's like a novice chess player going against" a grandmaster.

But their NFL experience did help in other ways, priming them with not just physical fitness but also good practice habits, making decisions on the fly and improving through film study and coaching.

"Like any other sport, you have to learn, try to figure out how to get better," Bulluck said. "Playing football at a very high level, being one of the best at the position once upon a time, to get to that level in anything you do you have to be able to take coaching."

And, of course, they're competitive.

"The message is: We want to bring attention to it. We want to have fun with it," Allen said. "But we're dead serious about what we're trying to accomplish."