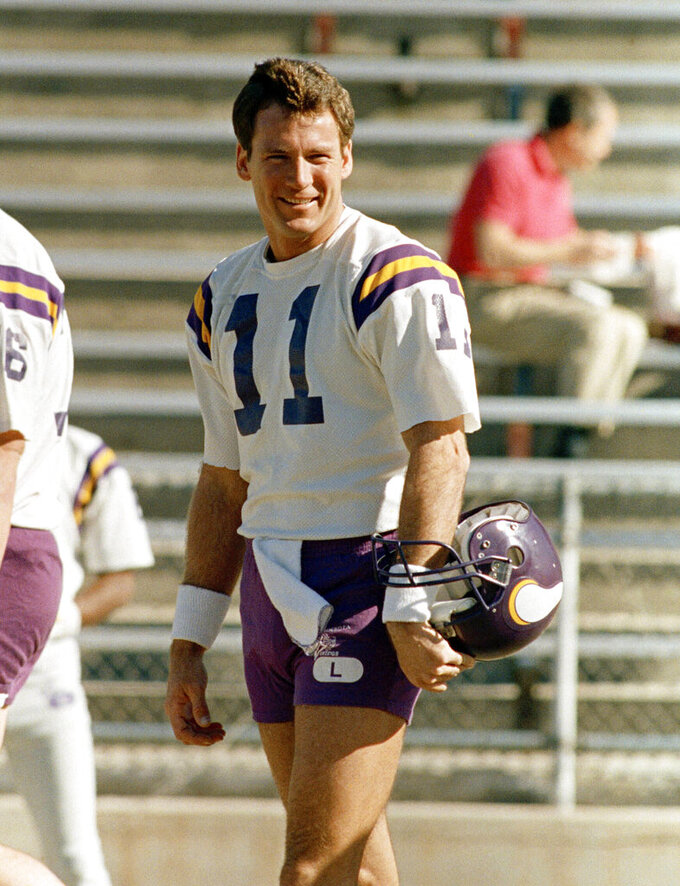 FILE - In this Jan. 8, 1988, file photo, Minnesota Vikings quarterback Wade Wilson is all smiles at the start of NFL football practice in Tucson, Ariz. The Cowboys say former NFL quarterback and longtime assistant coach Wade Wilson passed away Friday, Feb. 1, 2019, at his home in Coppell, Texas. The team didn’t specify a cause of death for Wilson, who died on his 60th birthday. Wilson played for five NFL teams from 1981-98, including 10 seasons for the Vikings, leading them to the 1987 NFC Championship Game. (AP Photo/Jeff Robbins, File)

DALLAS (AP) — Wade Wilson, the quarterback who led the Minnesota Vikings to an NFC championship game and coached the position with the Dallas Cowboys for more than a decade, died on his 60th birthday Friday.

Wilson died at his home in the Dallas suburb of Coppell. Police said a 911 call was made from Wilson's home, where the caller said Wilson was unresponsive and CPR was in progress. Emergency personnel determined upon arrival that Wilson was dead.

Police said there was no indication of foul play and that the death was under investigation.

"Wade was a cherished and valued member of our organization as a player, a coach and a wonderful friend," Cowboys owner Jerry Jones said. "This is a sad day for all members of the Cowboys family as we have lost a truly great man."

Wilson played for five NFL teams from 1981-98. He played 10 seasons for the Vikings, leading them to the NFC title game during the 1987 season. They lost to 17-10 to the Washington Redskins, who went on to win the Super Bowl. Minnesota made the playoffs the next two seasons, as well.

Wilson began his coaching career as the Cowboys quarterback coach from 2000-02, and returned to that role from 2007-17. He coached with the Chicago Bears from 2004-06.

The Cowboys didn't renew Wilson's contract after the 2017 season. He was Tony Romo's position coach beginning with the first full season as the starter for Romo, who ultimately became the franchise's career leader in yards passing and touchdown passes.

Wilson was replaced by Kellen Moore, who also took over as the position coach for the quarterback he played behind — Dak Prescott. Moore was promoted to offensive coordinator this week after one season as the QB coach.

Dallas coach Jason Garrett and Wilson were teammates with the Cowboys in the 1990s, and on the same coaching staff for 11 seasons starting in 2007. Garrett was promoted from offensive coordinator to head coach during the 2010 season.

"I am forever grateful for his friendship," Garrett said. "He had such a positive impact on me as a player, as a coach and as a person during our time together."

A native of Greenville, Texas, Wilson was an eighth-round draft pick by the Vikings in 1981 out of East Texas State (now Texas A&M-Commerce) and made 48 of his 69 career starts for them. He threw for 17,283 yards.

Wilson's best season statistically was 1988, when he led the NFL with a completion percentage of 61.4 percent with 15 touchdowns and nine interceptions.

His former Minnesota teammates recalled in a story for the team's website that Wilson overcame a diagnosis of diabetes early in his career. Longtime equipment manager Dennis Ryan said he carried a bag of M&M's on the sideline in case Wilson needed to raise his blood sugar.

"He got along with everybody," said Vikings coach Mike Zimmer, who was on the Dallas staff with Wilson. "He had a really good nature about him. He was a very smart coach and obviously was a good player."