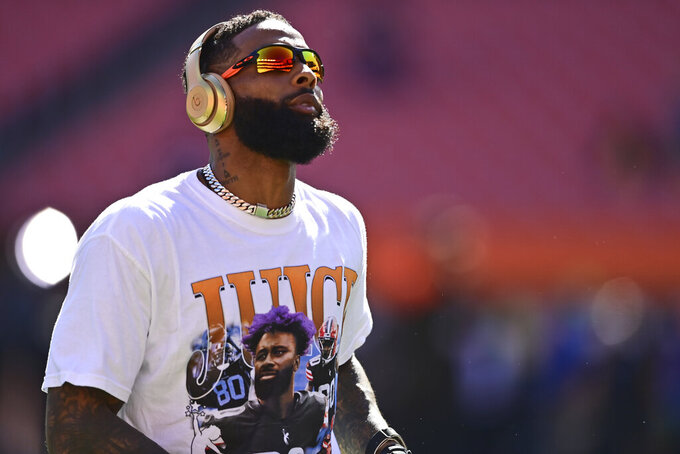 CLEVELAND (AP) — All kinds of emotions enwrapped Odell Beckham Jr. from the moment he sprinted out of the tunnel to a roaring ovation.

A few hours later, he had nothing left.

“Exhausted,” Beckham said, sliding into a chair for his postgame news conference. "I lost my voice and I wasn’t even screaming, so I don’t know what happened. I’m exhausted. It’s time to go home.”

Almost 11 months since his 2020 season ended in Cincinnati with a knee injury that cost him a playoff appearance and sparked debate about his value, Beckham returned to the field Sunday, He made an immediate impact as the Browns thrashed the Chicago Bears 26-6.

Beckham caught five passes from Baker Mayfield for 77 yards, added 10 yards rushing and provided a glimpse of what he could mean going forward for Cleveland's offense — a scoring threat from anywhere on the field.

For Beckham, the grueling rehab sessions, the hours of weight-room work and the dedication paid off. His comeback's complete — at last. But there were a few times he felt overwhelmed by its ending.

“There has been so much made of the first game back,” he said. "I try to downplay it but everyone else close to you and the people around you, the whole kind of vibe. You are trying not to think about it and then it gets put on you.

"I came out and tried not to go crazy in warmup or anything. Just get my legs underneath me. I got to the game, and I swear I just felt like each play I could not get them underneath me. A lot of things to look at the film and improve on, and that is all we can do.”

Although it may not have reached his high standards, Beckham's first game since Oct. 25 impressed his teammates.

“He's back like he never left,” said running back Kareem Hunt, who had 155 yards and a 26-yard touchdown run. "I told him that. He looked great out there. Looking forward to seeing many more.”

Browns star defensive end Myles Garrett said Beckham had every right to be worn out.

"He’s more tired than me," said Garrett, who recorded a career-high 4 1/2 sacks. “He looked good. You saw him, those hands are immaculate and the guy’s a hell of a route runner, so just love being able to watch him.”

One play before Beckham's first reception — a 13-yard grab, appropriately matching his jersey number — he was pulled down from behind on an incomplete pass. It was the 28-year-old's first significant contact in a game since being hurt last year, and for a second he feared he might be injured again.

“Needed it," said of the contact. "First hit came on a pass that I did not catch, and my shoulder popped out. I was like, all right of course something like that would happen. It was good to feel that and get back into it.

"The game went on, and it was a little bit smoother.”

Later, he was asked to clarify what happened to his shoulder and what he meant about not having his legs.

“Football stuff. Shoulder pop out, put it back in, keep playing,” Beckham said. “Like I was saying, it’s like a boxer who you can’t get your legs underneath you, you don’t have the same bounce. It’s not a lack of explosion or anything like that, it’s just that first-game emotions, energy, everything kinda running through you.”

Beckham was hyped before his hyped return.

He took the field for pregame warmups wearing gold-colored headphones and a Jarvis “Juice” Landry” T-shirt to honor his injured teammate and close friend, who went on injured reserve last week with a sprained knee.

“I had the shirt before any incident went down, I was going to wear it regardless, but it just seemed fitting,” he said.

At one point before the game, Beckham jumped into the first rows of seats to celebrate with his brother, who had flown into see him play.

“It was amazing,” Beckham said. "We just kind of embraced each other like the moment we’ve talked about this whole 10½ months and it’s finally here.”

When Beckham went down last year, the Browns took off and made the playoffs without him. His absence spawned theories that Mayfield is better off not having Beckham.

But the two worked on their chemistry during the offseason and Beckham said he felt the connection in his return.

"We hit a couple throws, things I could definitely work on,” he said. “Glad to get that one out the way.”