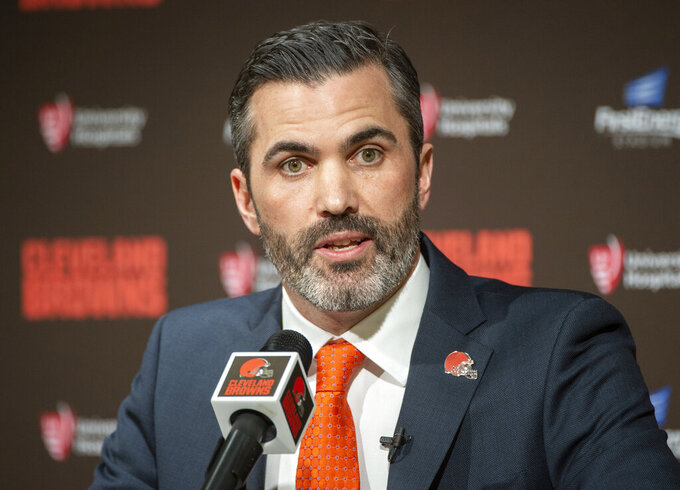 FILE - In this Jan. 14, 2020, file photo, Cleveland Browns NFL Football head coach Kevin Stefanski answers a question during a news conference at FirstEnergy Stadium in Cleveland. Looking back, Browns rookie coach Kevin Stefanski is now thrilled he decided to take a trip to Texas in March to visit Baker Mayfield. During a Zoom conference call on Friday, Aug. 7, 2020, Stefanski revealed that he went to Austin and spent time with Mayfield. (AP Photo/Phil Long, File)

CLEVELAND (AP) — Looking back, Browns rookie coach Kevin Stefanski is thankful he took a trip to Texas in February and visited Baker Mayfield.

It would be four months before he'd see his quarterback in person again.

“I didn’t know about this global pandemic," Stefanski quipped.

During a Zoom conference call Friday, Stefanski revealed he went to Austin “prior to everything going crazy” and spent quality time with Mayfield, who followed up a strong rookie, record-setting season in 2018 with a clunker in 2019 as the Browns finished 6-10 and didn't graze expectations.

When he was hired, Stefanski knew it was important to get to know his players as quickly as possible and felt a face-to-face meeting with Mayfield was essential to set the foundation for their relationship. He said during his time with Mayfield and his family, they were able to “cover all the bases” in their talks.

Stefanski won't take credit, but the meeting may have sparked Mayfield, who arrived at training camp looking chiseled and acting committed.

“From that moment until now, I have been very impressed with Baker,” Stefanski said. “He is all ball. He understands his role, he understands what we want him to do in this offense. I see a very committed football player who is ready to lead and who is excited to play.”

Earlier this week, Browns general manager Andrew Berry said Mayfield reported with a new physique after cutting body fat and adding four pounds of lean mass. Mayfield documented much of his offseason workout regimen on social media and Stefanski noted that he's pleased with the results and the 25-year-old's dedication.

“That just does not happen,” Stefanski said of Mayfield's physical makeover. "There is a lot of work that goes into that, and he clearly has done the work.”

Mayfield regressed last season. He was indecisive, inaccurate and often bailed out of the pocket, partly due to his lack of trust in Cleveland's tackles. He threw less touchdown passes (22) than he had as a rookie (27) and fired more interceptions (21) than he did in 2018 (14) after being the No. 1 overall draft pick.

Hardly anything went the way he or the Browns planned. And after the season ended, the coaching staff and front office were overhauled in what has become common in Cleveland as Mayfield's critics came out in force to question whether he's a franchise QB.

That remains to be seen, but Stefanski, who coached Minnesota's quarterbacks from 2009-13, came away from his meeting — and what he witnessed during a virtual offseason with Mayfield — with a greater appreciation for his leadership abilities.

“He really understands his teammates,” Stefanski said. "His teammates play hard for him. That just goes back to that thing he has that nobody can put a finger on and that the quarterback position has to have. You have to have ‘it.' You have to make sure you bring your guys along. The No. 1 job of a quarterback is to make the guys around you play better.

"There are a bunch of ways to do that. It is like the point guard on a basketball team. I just think Baker has embraced all of that since the moment he and I have gotten to know each other.”

Stefanski has seen Mayfield show his voice off the field as well.

During the nationwide social justice demonstrations that followed the killing of George Floyd in Minnesota, Mayfield said he intended to kneel during the national anthem before NFL games.

“Someone who is passionate, but he has listened before doing,” Stefanski said. “That is so important. Social justice is something that we are going to constantly as a team talk about. We have formed a social justice committee. We are going to make sure that we are all talking and listening to each other and then ultimately doing. And Baker is a great example of that.”

NOTES: Stefanski said he didn't worry about star WR Odell Beckham Jr. opting out of the season despite comments he made questioning the league's decision to go forward amid the COVID-19 outbreak. ... To this point, the Browns have held only virtual meetings but some can be held in person starting Sunday as the team moves to the next phase of camp guidelines. ... Of the five Cleveland players who opted out, four were offensive linemen. Stefanski said Berry and his staff will look to add needed depth up front.