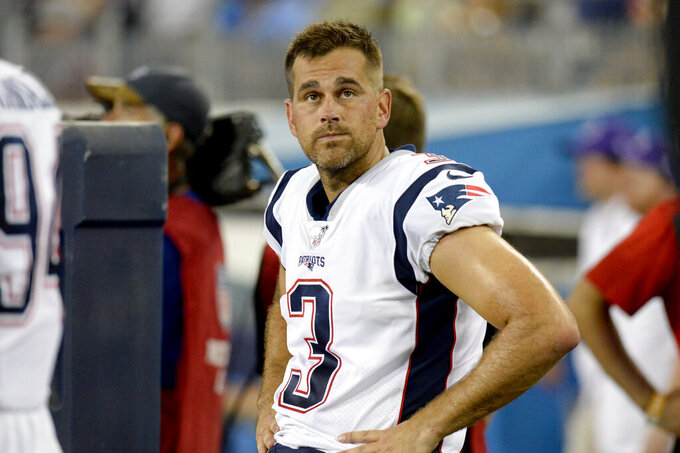 FILE - In this Saturday, Aug. 17, 2019, file photo, New England Patriots kicker Stephen Gostkowski looks at the scoreboard in the second half of a preseason NFL football game against the Tennessee Titans in Nashville, Tenn. The Patriots have placed kicker Stephen Gostkowski on injured reserve. The team announced the move Wednesday, Oct. 2, 2019 but didn’t disclose the 35-year-old’s injury. (AP Photo/Mark Zaleski, File)

Patriots coach Bill Belichick hasn't had to deal with much turnover — or uncertainty — at placekicker.

Just three people have had the job since Belichick took over in New England in 2000, including two of the best in NFL history: Adam Vinatieri and Stephen Gostkowski. (Shayne Graham filled in for five games when Gostkowski was out with a thigh injury in 2010.)

Even quarterback has seen more variety for the six-time Super Bowl champions, with Matt Cassel taking snaps when Tom Brady was injured for almost the entire 2008 season, and Jacoby Brissett and Jimmy Garoppolo starting two games apiece when Brady was suspended in 2016.

Now Belichick turns to Mike Nugent for field goals and extra points after Gostkowski, who has had the job since 2006, went on injured reserve with a hip injury. Punter Jake Bailey, who also handled kickoffs at Stanford, is expected to do the same for New England.

"Through the years, I've been lucky. We have had a lot of stability. There's no doubt about that," Belichick said on Friday. "But look, sometimes things happen and you have to make changes like you do at any other position. You do the best you can."

Viniatieri was the Patriots' all-time leading scorer, kicking two winning field goals in the Super Bowl before leaving for the Indianapolis Colts as a free agent in '06. Gostkowski, 35, came in and broke the franchise scoring record over the past 14 years, appearing in every game for the team since 2011.

But he has struggled so far this season, missing four extra points; he hadn't missed more than three extra points in any of his previous 13 NFL seasons. He was placed on injured reserve on Wednesday and is expected to have hip surgery.

"Steve Gostkowski's one of the greatest kickers of all time," Belichick said. "He's been great for this franchise. Unfortunately, he's not available so we'll move on. Mike's done a good job. He has a lot of experience. Obviously, we have confidence in Mike or we wouldn't have signed him."

The Patriots also signed Younghoe Koo to the practice squad. The 25-year-old connected on three of his six field goal attempts and all nine extra points before being released by the Los Angeles Chargers after four games in 2017. He also played for the Atlanta Legends of the now-defunct Alliance of American Football.

"We'll see how it goes," Belichick said. "If you don't have confidence in the player than you should get somebody else you have confidence in and put them out there. I think Mike will do a good job but, I mean, we all have to prove it every week. That's the way it is for all of us."