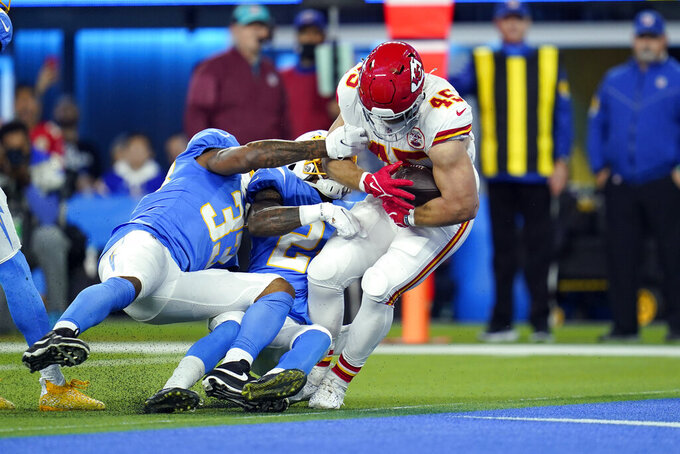 Kansas City Chiefs fullback Michael Burton scores a touchdown during the first half of an NFL football game against the Los Angeles Chargers on Dec. 16, 2021, in Inglewood, Calif. In the past two decades the fullback become nearly extinct, as teams grapple with roster limits and salary cap restraints that force general managers to value players that can do a little bit of everything. (AP Photo/Ashley Landis, File)

KANSAS CITY, Mo. (AP) — During a game against the Los Angeles Chargers earlier this year, the Kansas City Chiefs tried just about everything to make the yard or two they needed for a first down, from short passes over the middle to deep looks down field.

Four times they failed to convert.

The Chiefs only succeeded once in their 27-24 victory, and it wasn't by putting the ball in the hands of Pro Bowl quarterback Patrick Mahomes, or star tight end Travis Kelce, or even digging into coach Andy Reid's famously deep playbook. It was by shoving the ball into the belly of big fullback Michael Burton, who plowed straight into a mass of humanity at the line of scrimmage in a dive play that surely warmed the hearts of old coaches everywhere.

It was a reminder of why Reid values having a fullback. And in an era in which the position has become nearly nonexistent, it was a play that only 14 teams — those that still have one on the roster — could even call in such a situation.

“It gives you some flexibility in the personnel groups that you can use. It gives you a lead blocker, which becomes important in certain situations. In our case,” Reid said, “this kid can catch and he can run the ball."

Fullback was once a glamour position in pro football, back in the day of Hall of Famers such as Bronco Nagurski in the 1930s and ‘40s and John Henry Johnson in the 1950s and ’60s. The immortal Jim Brown? Folks these days call him the best running back to play the game, but in truth, he played fullback for the Browns.

Those three are among eight fullbacks recognized in the Pro Football Hall of Fame.

The last one to be inducted was Larry Csonka, though, and his last season was 1979, by which point the position already was falling out of favor. Innovative coaches such as Bill Walsh brought along a pass-happy West Coast offense that forced fullbacks to catch as much as run, and Joe Gibbs embraced the idea of mobile H-backs over traditional fullbacks.

Only in the past two decades, though, has the fullback become nearly extinct, as teams grapple with roster limits and salary cap restraints that force general managers to value players that can do a little bit of everything.

Teams began using extra tight ends in the 2000s, and soon after embraced a third wide receiver in the slot. Those positions simply became more versatile, particularly when it came to kickoff and punt coverage.

McCarthy has always valued fullbacks. That year the Packers had three? They won the Super Bowl. But the Cowboys don't have a single one on the roster this season, a good example of how teams have adapted to changing times.

They aren't alone, either. Ten years ago, 23 of the 32 teams in the NFL listed a fullback as a starter, meaning they were on the field for the first offensive snap of the game. All but two teams had fullbacks playing significant snaps.

That number has been cut in half. And whereas eight fullbacks were chosen in the NFL draft in 2003, that number had fallen to zero by 2019 and '20. The Ravens chose Ben Mason in the fifth round in 2021, and the only fullback picked last April was Zander Horvath, who went to the Chargers in the seventh as the 260th player selected.

Not surprisingly, the money spent on fullbacks has plummeted. Only the 49ers' Kyle Juszczyk has a contract longer than four years and worth more than $12 million. Only six make more than $3 million a year. And the average guaranteed value of the the top five is $5.25 million, while the average guaranteed value of the top five tight ends is $32.75 million.

The way fullbacks are used in offenses has changed, too. In 1990, one out of every five carries in an NFL game belonged to a fullback, but as recently as 2015, that number had fallen to less than one in 100.

In fact, much of the time they aren't used in the running game at all. They are used in passing downs, either to help protect a team's high-priced quarterback or to slip out of the backfield on unsuspecting defenses for a screen pass.

“When I first got here,” Vikings quarterback Kirk Cousins said, “(coach) Kevin Stefanski said, ‘Just watch C.J. Ham, because he does everything right all the time. ... He can run the ball and catch a go-ball, like he did against the Ravens last year. He can also block a defensive end who's 50 pounds heavier than him. He's the kind of player that, when he’s in the game in a crucial moment, you as a quarterback feel better knowing that he’s one of the 11 guys in that huddle.”

Indeed, while personnel directors might have panic attacks at the thought of wedging a fullback onto the roster, they are almost universally loved by coaches and fellow players, both for their inherent toughness and their unique skillsets.

“I feel like that's the only way you can dictate your terms,” Shanahan said. “When you have a fullback in the game, if you really want to run the ball, you can run the ball regardless of what the defense is doing.”

The NFL is an ever-evolving beast, though. What makes sense one year tends to be out of vogue the next. And it's very possible that the fullback position, currently headed to the mothballs, will eventually make a comeback.

“I’m a big believer in two-back offense,” McCarthy said. “Two-back offense kind of went out of the league here probably the last 10 years, but it’s coming back more and more the last couple of years. That’s part of the evolution of schematic focus and tendencies and trends. If you just say, ‘What do you want your offense to look like?’ I would always want a fullback on the 48 each and every week. There’s always points in the game where you’ve just got to go run the football downhill."