Falcons, 1-4 for the 2nd straight year, are in big trouble 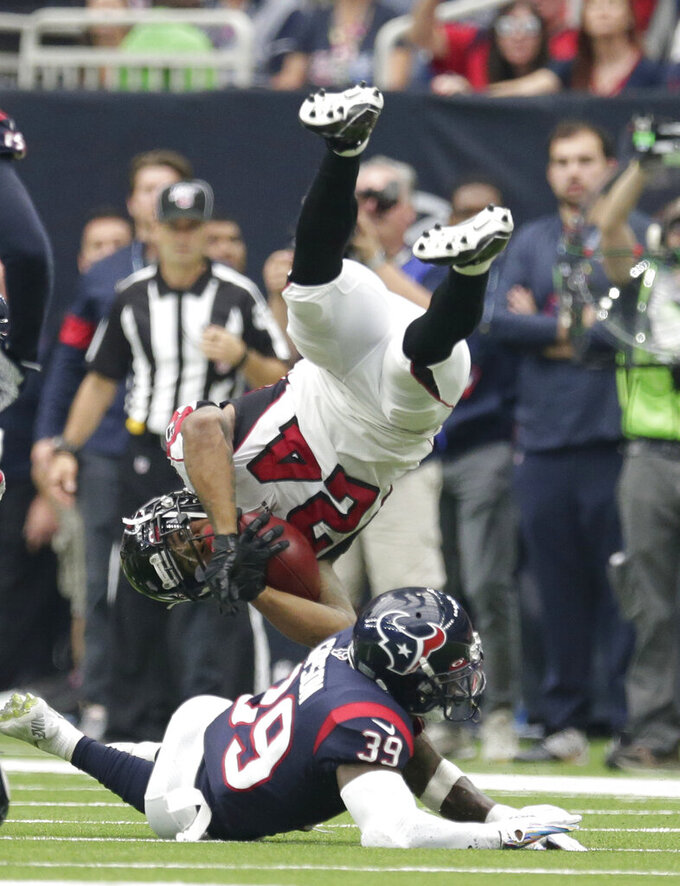 ATLANTA (AP) — The Atlanta Falcons can only hope a few days in the desert will turn their season around.

When the NFL announced its schedule six months ago, coach Dan Quinn decided his team, after visiting Houston, would spend a week in Arizona leading up to its game against the Cardinals.

Quinn took a similar approach three years ago, and the time together helped form what he still calls the "brotherhood," a slogan he bled all the way to the Super Bowl and uses to this day.

But it will be a big surprise if another long road trip helps. The Falcons are off to a 1-4 start for the second straight season and showing no signs of improvement. They've gotten worse during each week of a three-game losing streak.

Quinn's job security is another issue. He is 19-21 since winning the NFC three years ago and with the final say in personnel matters, he is most responsible for this mess.

He indicated on a conference call with reporters Monday night that there are no immediate plans to have another coach run the defense. Quinn fired all three coordinators after last season and oversees the defense himself.

"My ego is never as big as the team," he said. "I will always do what is best for that, but at this time I don't think that's where I'm at."

Maybe Sunday's 53-32 loss to the Texans will be the low point. Perhaps Atlanta will learn how to establish a running game despite Devonta Freeman ranking 40th in the league and stop somebody after getting gouged for 592 yards and managing one quarterback hit.

But it's hard to imagine the Falcons pulling off a miracle similar to what Indianapolis did last year, turning a 1-5 start into a wild-card berth. Quinn and the players keep saying effort is not an issue, that practice is going well, but each loss is only more evidence the season is going nowhere.

Last year the Falcons won three straight in October against the Buccaneers, Giants and Redskins, but they face a more difficult task this time. After facing the 1-3-1 Cardinals, Atlanta's next four opponents — the Rams, Seahawks, Saints and Panthers — are a combined 14-6.

"All the focus has to be on Arizona, and you've got to start rolling on it because there's plenty of good stories of what it can be if you get going," he said. "But, man, you better get going and not wait."

Matt Ryan, who connected with eight receivers, leads the league in completions and is second in yards passing, but those are mostly empty numbers. The Falcons keep falling behind and have to throw the ball repeatedly to try and catch up.

Third-down defense, same as last year, and pressure on the quarterback. The Falcons are giving up 56% to rank third-worst on third downs, seven points worse than they were to rank last in 2018. They've had no sacks the last two weeks and a total of five that's tied for fewest in the league.

Austin Hooper leads the team with 34 catches and 343 yards receiving, good for the fourth-year tight end but not so good for an offense that needs to get the ball more often in the hands of star wideout Julio Jones. Opponents are bottling up Jones too often with double teams and safety help.

Matt Wile, signed for the second time this year to fill in for injured Matt Bosher, had two kickoffs sail out of bounds to let Houston start at its 40-yard line. Both drives ended in points. And Freeman, three years removed from being made the NFL's highest-paid running back, leads a thin ground game that's averaging just 67.6 yards.

Defensive back Damontae Kazee suffered a head injury in the third quarter and did not return.

Minus-50 — Atlanta's points differential, which ranks second worst in the NFC.

Struggling teams always say they have the right people in house to make corrections. The Falcons are no different, but the words are starting to ring hollow.

"I told the team this past week wins don't happen by accident, and you've got to earn them, and you've got to do right in how we're doing," Quinn said. "When we don't, those are the results. So that's the intent of focus. If we have to do less to get it right, we will. But no doubt, backs against the wall and gut-check time for us, but all across the board disappointed in our performance."