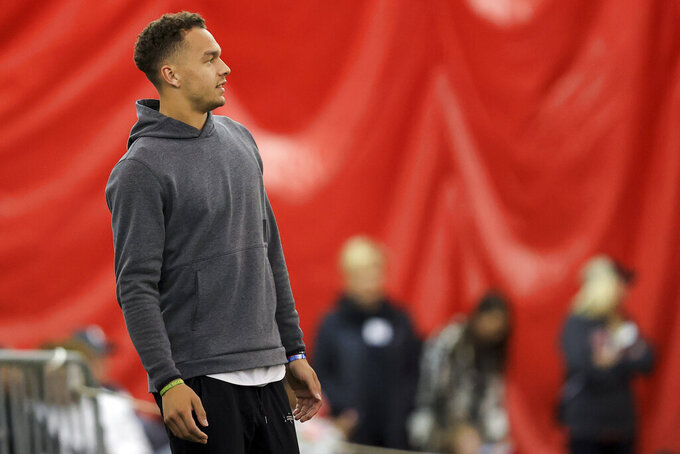 FLOWERY BRANCH, Ga. (AP) — The offensive theme for the Atlanta Falcons continued on the final day of the NFL draft with their final three picks, including BYU running back Tyler Algeier.

Southern California's Drake London, expected to be the team's new top threat at wide receiver, was Atlanta's first-round pick Thursday night. Another highlight of Atlanta's draft came with the selection of Cincinnati quarterback Desmond Ridder in the third round Friday night.

Finally, the Falcons finished on Saturday by adding Allgeier in the fifth round and two Georgia players, left guard Justin Shaffer and tight end John FitzPatrick, in the sixth round to complete their eight-player draft class.

“We got better,” Fontenot said Saturday.

The Falcons were 7-10 in 2021 for their fourth consecutive losing season. Such picks as London, Ebiketie and Ridder provide much-needed hope for improvement in the second season with Fontenot and coach Arthur Smith.

Fontenot says he only stayed true to his draft board, taking the best player available instead of reaching to address a need, when he chose Ridder. Even so, Ridder was needed to add athleticism and depth to the position.

Marcus Mariota is expected to open this season as the starter, but Feleipe Franks was the only other quarterback on the depth chart before the draft. Mariota was signed to a two-year deal after Matt Ryan was traded to Indianapolis.

Shaffer said he invited Malone to a post-draft party Saturday before he realized they would be NFL teammates.

“It’s just a miracle how this whole situation played out,” Shaffer said. “We knew our dream was to get to the league and keep putting on for our family. He was going to come see me today because I was going to celebrate. ...

"Now we’re going to see each other every day. You can’t complain about that.”

Ridder says he admires Mariota and believes they have a similar style of play.

“Just as far as our athletic abilities, our leadership, our ability to extend plays and then be smart with the ball once we do extend plays,” Ridder said. “... I’m excited to get down there and learn from someone who has been in the game for a long time.”

Smith said he likes hearing Ridder express his respect for Mariota's talents and eagerness to learn from the veteran.

“That’s a good thing that he’s looked up to Marcus,” Smith said. “It will be a really good room.”

Shaffer could push Jalen Mayfield for a starting job at left guard. Mayfield allowed 11 sacks as a rookie in 2021, the most by any guard in the league.

Shaffer is the first Georgia player drafted by the Falcons since linebacker Akeem Dent in 2011.

Shaffer and FitzPatrick were part of a school-record 15 Georgia players drafted.

“I’d say it’s exciting for me just to see everybody get drafted,” Shaffer said, adding: “It puts a smile on my face.”

“We love his yards after contact,” Smith said, adding “The opportunities there in the running backs room are wide open.”

Cordarrelle Patterson, who also plays at wide receiver, and Mike Davis return at running back. The Falcons signed Damien Williams.

FROM WALK-ON TO NFL

Allgeier began his college career as a walk-on and played one season at linebacker before moving back to running back.

“I’ve been slept on almost my whole life,” Allgeier said.