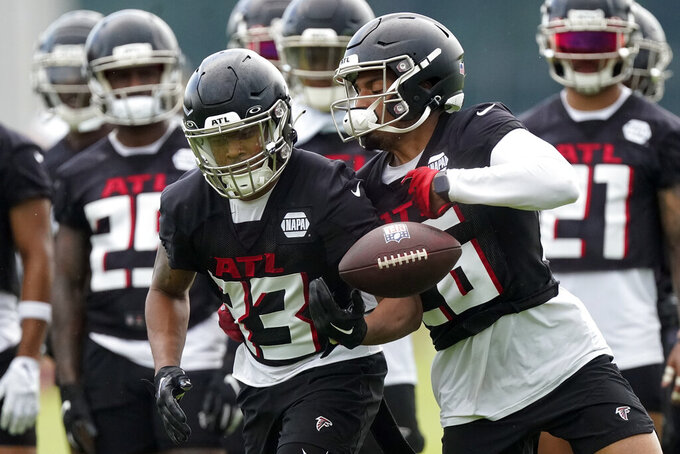 FLOWERY BRANCH, Ga. (AP) — The Atlanta Falcons had a 100% turnout — but not full participation — on Tuesday's opening day of their mandatory minicamp.

Coach Arthur Smith said he allowed running back and wide receiver Cordarrelle Patterson to continue his personal offseason workout program instead of joining his teammates on the practice fields.

“Trying to be smart, to maximize him so we have him for 17 games,” Smith said of Patterson, 31, who was a surprise of the Falcons' 7-10 season in 2021. Patterson led the team in rushing and ranked third with 52 receptions.

He signed a two-year, $10.5 million deal with Atlanta on March 19 and is expected to serve a similar all-purpose role this upcoming season.

Smith said he expects Patterson to be available for the start of training camp on July 26.

“He’s a real pro,” Smith said before practice. “I didn’t think it was necessary for where he’s at and we need him to play a 17-game season. Again, it’s not one-size-fits-all. You try to be smart. It was my decision. He’s here, but he won’t be out on the field.”

Patterson's eight career kickoff returns for touchdowns are tied for the most in NFL history.

Smith said cornerback Mike Ford was excused because of a family matter.

Linebacker Deion Jones, fullback Keith Smith and defensive lineman Vincent Taylor were held out while rehabbing from injuries or offseason surgeries. Smith said he couldn't guarantee all the players who are rehabbing will be cleared for the start of training camp.

“I won’t back anybody into a corner, but I feel good about where we’ll be on July 26,” Smith said, adding it was possible “one or two guys” could be placed on the physically unable to perform list.

“It may be short term,” Smith said. “We just have to assess that when guys come back for training camp.”

Heavy rain forced a delay of about one hour at the start of practice. Instead of moving the team to its indoor facility, Smith chose to wait out the rain and return to the fields.

The team will practice again on Wednesday. Smith revealed that for Thursday's third day of the minicamp schedule, he has planned a Top Golf outing instead of a workout.