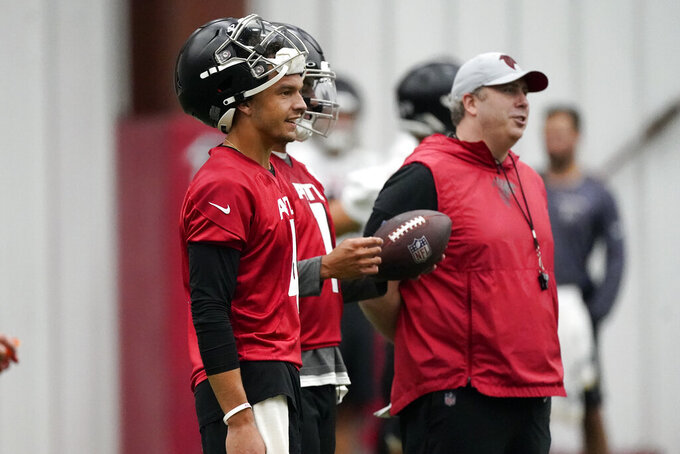 It was anything but just another forgettable Atlanta Falcons offseason workout for Franks.

While Ridder and Marcus Mariota are preparing to compete for the Falcons starting job at quarterback, Franks is exploring a new hybrid role. He is still listed as a quarterback, but he is spending most of his practice time at tight end.

For Franks, catching a touchdown pass instead of throwing one was a thrill — even in an otherwise forgettable organized team activities drill.

“It was fun, man,” Franks said. “It was definitely super different.”

Coach Arthur Smith said Thursday he places Franks in a “hybrid category.” The second-year player will continue to take snaps at quarterback while learning the new position.

As the Falcons prepare for next week's mandatory three-day minicamp, it seems clear this experiment will continue past the OTAs.

This is not the first time the Falcons have sought to take advantage of Franks' athletic skills. As a rookie last season, he ran routes and played on special teams. As the third-string quarterback behind Matt Ryan and Josh Rosen, Franks' only pass was intercepted in a loss to New England.

Looking to increase his value after the Falcons turned over their depth chart at quarterback, drafting Ridder in the third round and signing Mariota, Franks volunteered to play tight end.

While Mariota and Ridder wore the red jerseys reserved for quarterbacks on Thursday, Franks' No. 15 jersey was white, like other players on offense.

“I see this jersey as a materialistic thing,” Franks said with a laugh.

“Just really stating the obvious, I'm trying to add more value to myself. At the same time it’s been really fun for me. It helps me in all aspects at any position, whether I’m playing tight end or quarterback. I learn more about the run game, more about blocking schemes and things like that. It’s really helpful in the quarterback room and the tight end room.”

Franks played three years at Florida before transferring to Arkansas, where he set a single-season record by completing 68.5% of his passes in 2020. He was signed by Atlanta as an undrafted free agent last year.

The Falcons showed their willingness to have players explore dual roles last season when Cordarrelle Patterson flourished as a running back and wide receiver. No one has suggested there is a path for Franks to make a similar impact this season.

“All the tight ends in the room have been super helpful to me, welcoming me in and helping me, whether it be in my routes or blocking,” Franks said. “There’s tons of stuff I need to learn. ... It’s been fun, really fun.”

“He’s got the size and speed and athletic ability to do it,” Peelle said. “He's not afraid to be physical with it. And he can catch the ball. The kid is fun to be around. He’s just a really good football player.”