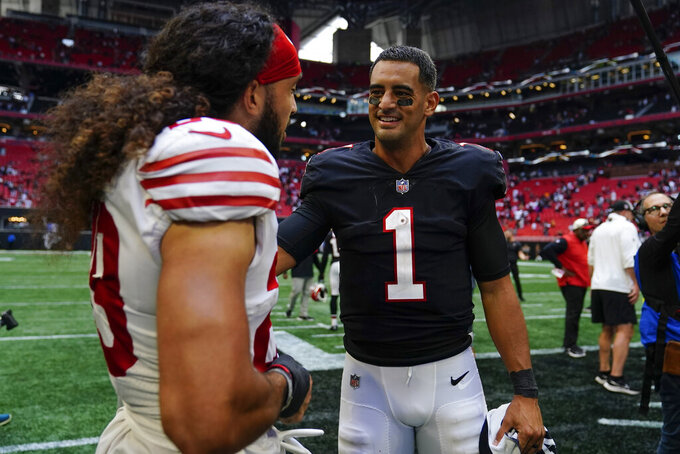 ATLANTA (AP) — Who's that team at the top of the NFC South?

Yep, it's the Atlanta Falcons.

Six weeks into a season of extremely low expectations, the Falcons (3-3) are tied with Tom Brady and the Tampa Bay Buccaneers for the division lead.

Making it even more impressive, Atlanta has managed to have success while opening with a very difficult stretch of games that included the San Francisco 49ers on Sunday.

The Falcons overpowered a team that reached the NFC championship game a year ago, winning 28-14 while throwing just 14 passes.

With every game, coach Arthur Smith's team is growing in confidence and defying the skeptics.

“Really all season, I think this team has been fairly confident,” Smith said. “We're not going to be satisfied. This team is going to continue to grow and and improve. It's just a fun group to coach. I'm really proud of those guys.”

Even with Cordarrelle Patterson on the injured list, the running game worked to perfection against the Niners. That allowed the contest to be played at just the sort of plodding, grind-it-out style the Falcons prefer.

Atlanta ran the ball a season-high 40 times for 168 yards, with Caleb Huntley and Tyler Allgeier sharing the load in place of Patterson. Huntley carried it 16 times for 59 yards, Allgeier chipped in with 15 carries for 51 yards and quarterback Marcus Mariota contributed six carries for 50 yards and a score.

It wasn't pretty, but it was highly effective. Give credit to the offensive line for winning the battles up front against an 49ers' defense that, while depleted by injuries, came into the game ranked No 1 in the NFL.

Afterward, the linemen toasted their performance with a round of beers in the locker room.

The Falcons are never going to be a pass-happy team in this scheme, but they do need more contributions from their receiving corps.

Jaylinn Hawkins had a huge game from his safety position. Not only did he come up with one of two interceptions by the Falcons, he alertly fell on a loose ball in the end zone for a touchdown that gave Atlanta an early 14-0 lead. A.J. Terrell scooped up a Niners' fumble, but lost his grip on the ball stretching for the goal line. It could've been a touchback; Hawkins' heads-up play made it a Falcons' TD.

Mariota had by far his best game as the Falcons' quarterback. He threw it only 14 times but completed 13 of those for 129 yards and two touchdowns. He also burst out of the pocket for a 15-yard run on third-and-12 to set up a 3-yard touchdown on a bootleg that put the Falcons ahead to stay late in the first half.

More and more, it looks like Mariota is rejuvenating his career in Atlanta, where he replaced longtime QB Matt Ryan.

“It comes down to just being able to have your opportunity,” said Mariota, who barely played the last 2 1/2 years. “I will be forever grateful to this organization for allowing me to have that chance.”

London, the No. 8 overall pick in this year's draft, got off to a strong start for the Falcons, hauling in a pair of touchdown catches in his first three games. He hasn't done much since then, totaling nine catches for 92 yards. It's not all his fault, of course, given the Falcons' focus on the ground game. But there will be times when someone has to stretch defenses vertically, and he's the most logical candidate.

Atlanta lost both starting cornerbacks against the Niners. Terrell pulled up with a hamstring injury early in the third quarter and Casey Hayward hurt his shoulder attempting to tackle Deebo Samuel in the final period.

Another defensive back, Isaiah Oliver, also hobbled off the field in his season debut after spending the first five weeks on IR. Oliver had the Falcons' other pick.

While Terrell and Oliver aren't expected to miss much time, Hayward has an injury that could be a long-term issue, according to Smith.

The Falcons complete their difficult seven-game stretch to open the season when they travel to Cincinnati to face the reigning AFC champion Bengals on Sunday. Atlanta will get another chance to climb above .500 for the first time since the end of the 2017 season.

“That would mean a lot,” Hawkins said. “Winning is everything.”