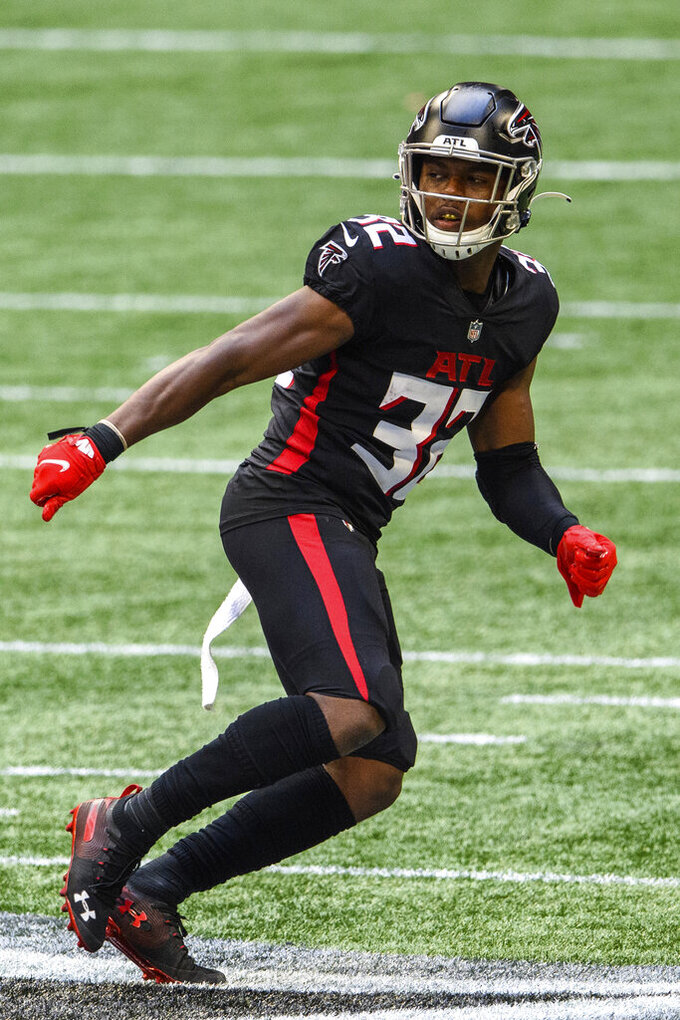 Atlanta Falcons safety Jaylinn Hawkins (32) works against the Chicago Bears during the second half of an NFL football game, Sunday, Sept. 27, 2020, in Atlanta. The Atlanta Falcons are looking to have some injured players return to their depleted defense for Sunday's game against Carolina. The winless Falcons have lost five members of their secondary. (AP Photo/Danny Karnik) 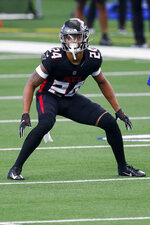 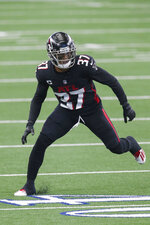 ATLANTA (AP) — Four weeks of constant upheaval on defense have made it difficult for the Atlanta Falcons to enjoy any continuity in practice or games in their disappointing 0-4 start.

Defensive coordinator Raheem Morris is hoping to have some starters return from injuries in Sunday's game against Carolina.

Atlanta's secondary has been hit especially hard. Safety Damontae Kazee suffered a torn Achilles tendon in the Falcons' 30-16 loss at Green Bay on Monday night and will miss the remainder of the season.

Kazee is the fifth starter in the secondary to suffer an injury. He will be placed on injured reserve.

Morris acknowledged it is difficult to build a cohesive defense when constantly forced to adjust to new combinations in the secondary.

“That’s always an issue,” Morris said Wednesday. “... You want to be able to have those guys be able to play together and communicate together and doing the same things. We haven’t had that all season.”

There was one significant piece of good news. Cornerback Kendall Sheffield (foot) returned against the Packers for his 2020 debut after missing three games.

Atlanta's offense also has a notable injury concern. Wide receiver Julio Jones did not return for the second half against the Packers after aggravating a hamstring injury that forced him to miss a loss to Chicago. His status against Carolina is uncertain.

“It’s just a matter of when you go through it and we’ve got to do a better job of surviving and advancing and playing the right way,” Morris said.

The depleted defense was an easy target for Packers quarterback Aaron Rodgers, who threw four touchdown passes. Rodgers isn't the only quarterback to flourish against the Falcons, whose 13 TD passes allowed lead the league.

The Falcons hope Sheffield's debut is the start of a healing process for the defense. Quinn said Tuesday that McKinley, Allen and Neal were “trending in the right spot” to return. He said McKinley was the most likely of the three to return this week.

The loss of Kazee won't be easy to overcome.

“We’re so bummed for Kazee,” Quinn said. “We love him. He’s a relentless competitor. The energy he brings, the toughness he brings, he’s a ball-hawk for our team. So, losing him for the year, that’s tough.”

Morris said Terrell, the first-round pick who opened the season as a starter, remains on the COVID-19 reserve list.