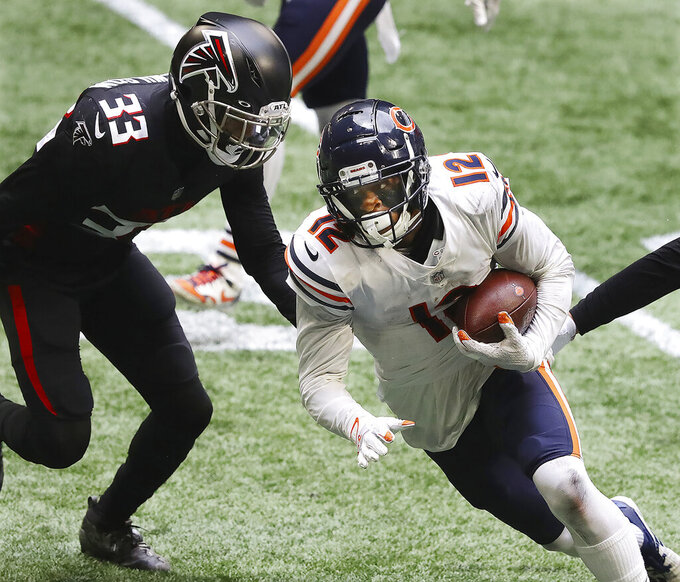 ATLANTA (AP) — The Atlanta Falcons are banged up on defense at just the wrong time.

Facing a Green Bay offense Monday that leads the NFL in scoring and ranks second in total offense, the Falcons will limp in to Lambeau Field with five starters ailing on a unit that's given up a league-high 36 points per game.

At least cornerback Kendall Sheffield is expected to return, but the Falcons will be without Terrell, a first-round draft pick who is on the COVID-19 reserve list for the second straight week as Atlanta prepares for the Packers (3-0).

The Falcons did get some good news as linebacker Foye Oluokun returned to practice in limited fashion after missing last week’s loss to Chicago with a hamstring injury. And cornerback Jordan Miller, who was suspended four games last year for violating NFL substance abuse rules, has been activated to the 53-man roster.

Losing Jarrett, the team’s best defensive lineman, to a hip injury in the fourth quarter last week was a big blow for a pass rush that was almost nonexistent as Bears quarterback Nick Foles led a late rally. Jarrett returned as a limited participant Friday, but McKinley (groin) and Allen (elbow), both of whom missed the Chicago game entirely, have not been able to go. Neal was added to the injury report this week with a sore hamstring and hasn’t practiced.

Sheffield was sidelined the first three games with a foot injury, but he has been a full participant in practice this week. He will start at left cornerback in Terrell’s spot.

“He brings speed, he brings ball awareness, he brings toughness, and we’ve certainly been missing him,” defensive coordinator Raheem Morris said. “To get our guy back, Sheff, is certainly a joyous day for all of us.”

The Packers, led by quarterback Aaron Rodgers, have yet to commit a turnover. The Falcons have five takeaways, three coming in the first quarter against Dallas on forced fumbles by Oluokun.

“You’ve got to force them,” coach Dan Quinn said. “The quarterback’s not going to make a simple mistake where it’s a misread of a coverage or an overthrown ball. He’s too accurate for that, too smart for that, so you’ve got to be deliberate in taking your shots and forcing them.”

The Falcons are coming off consecutive losses in which they became the first NFL team to blow fourth-quarter leads of 15 points or more in back-to-back games.

“I think we all lean on each other,” linebackers coach Jeff Ulbrich said. “It’s the only chance we’ve got to get out of a hole. We’re in a little bit of a hole right now, but we’re absolutely capable of getting out of it. The only we can get out of it, is we bunker up, and we and look to the men within these walls.”

NOTES: WR Julio Jones, who missed the Bears game with a sore hamstring, was a limited participant in practice the last two days, but he said Friday that he expects to play. ... WR Calvin Ridley (ankle) was limited after missing Thursday’s workout. ... K Younghoe Koo is nursing a groin injury and has been unable to practice this week. The Falcons signed K Elliott Fry to the practice squad, and he will travel to Green Bay. ... RT Kaleb McGary was a limited participant the last two days after missing the Bears game with a knee injury.