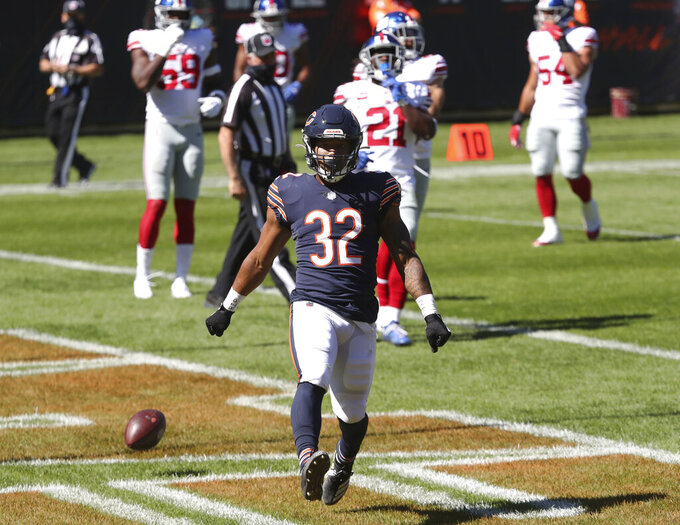 Chicago Bears running back David Montgomery (32) celebrates after rushing for a touchdown in the first quarter of an NFL football game against the New York Giants, Sunday, Sept. 20, 2020, in Chicago. (John J. Kim/Chicago Tribune via AP)

ATLANTA (AP) — Let's see if the Atlanta Falcons can put another nightmarish loss behind them.

The team that infamously squandered a 28-3 advantage in the 2017 Super Bowl suffered an improbable defeat in Week 2 of this NFL season, blowing a 20-point lead to the Dallas Cowboys and giving up an onside kick that set up a game-winning field goal on the final play.

The 40-39 stunner turned up the heat on coach Dan Quinn, especially when owner Arthur Blank said it looked as though the Falcons (0-2) didn't know the onside kick rules.

Quinn urged his team to turn its attention to Sunday's game against the Chicago Bears (2-0), but he conceded that it wouldn't be easy to get over such a disappointing outcome.

The Bears have a shot at their first 3-0 start since 2013, though they've hardly dazzled in their first two games.

In Week 1, Chicago rallied from 17 points down to beat the Detroit Lions 27-23. Last weekend, the Bears nearly blew a 17-point lead of their own, hanging on for a 17-13 win over the New York Giants.

“You’re always happy about the win, but not too happy because we haven’t played a full game together,” Bears quarterback Mitchell Trubisky said. “We know what we’re capable of if we do play four quarters, so that’s gotta be the goal.”

They appeared to be cruising at Dallas, taking advantage of three early turnovers on the way to a 29-10 halftime lead.

Even after the Cowboys rallied, the Falcons were up 39-24 with 5 minutes to go. But the defense couldn't hold, giving up a pair of touchdowns that gave Dallas hope. Even then, the Cowboys had to pull off an onside kick — a real longshot given rule changes that were designed to improve player safety.

The Falcons backed away from the spinning ball, simply watching until it had carried 10 yards. That allowed the Cowboys to make the recovery and win the game, turning Atlanta into the sort of national laughingstock that brought back memories of the Super Bowl meltdown.

Quinn insisted that his players understood the rules, but were simply befuddled by the strange kick.

“Arthur and I can disagree on how we talk about it, but what we 100 percent agree on is that it shouldn't have happened," the coach said. “We've got to work to make sure it doesn't happen again.”

Some things to watch for when the Falcons try to bounce back against the Bears:

Coach Matt Nagy insisted he has seen enough improvement from Trubisky to keep him in the lineup.

“There’s been a lot of growth with him as well in regards to his decision-making,” Nagy said. “Let’s keep that next-play mentality going, where if something bad happens on one play, let’s make a good play the next. He’s been doing that. We haven’t had that domino effect."

Trubisky threw three fourth-quarter touchdowns against Detroit and was sharp in the first half against the Giants. But the other five quarters haven’t gone as well for him.

Falcons star Julio Jones was clearly bothered by a hamstring injury, which seemed to get worse against the Cowboys. The receiver will be closely monitored throughout the week, in hopes of getting him back on the field Sunday.

“He's a guy who really understands his body,” Quinn said. “He'll work through it.”

If Jones is limited or can't go, the Falcons at least have plenty of other potential targets.

The Falcons are the only team that has four receivers with at least 100 yards through two games. Calvin Ridley leads the league with four touchdown receptions and is tied for most receiving yards at 239. Jones has 181, Russell Gage 160 and tight end Hayden Hurst 110.

The Bears have five sacks and could be poised to significantly improve those numbers.

A big reason is the presence of outside linebacker Robert Quinn. Signed to a $70 million contract in the offseason, he had a strip sack in his Bears debut last week.

Quinn missed the opener because of an ankle injury. His presence on the outside draws attention away from Khalil Mack.

Atlanta ranks last in the league in red-zone defense, surrendering touchdowns on nine of 10 drives inside the 20. They might have a little easier time of it against the Bears, who have scored on three of six trips into the red zone.

“We’re putting a real focus on the red zone,” Falcons defensive coordinator Raheem Morris said. “We’re giving up too may red-zone opportunities and too many points. We kind of fell apart this past week.”