Falcons fizzle with Patterson on sideline late in game 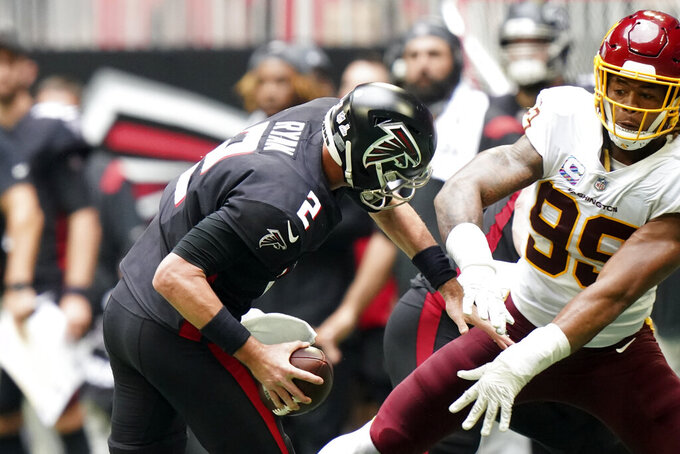 ATLANTA (AP) — All the Atlanta Falcons needed was a first down or two to put away Washington, but coach Arthur Smith was left to lament what might have been.

His offense fizzled in the fourth quarter and failed to utilize its best playmaker, Cordarrelle Patterson, in the final period.

Smith was adamant that running back Mike Davis was sufficient to carry the load in the fourth, but the offensive line didn’t create enough space for Davis to move the chains in Sunday's 34-30 loss.

Davis was dropped for a 3-yard loss on the first play of the next-to-last possession, and a 5-yard pass to him on third down wasn't enough.

“You trust him,” Smith said. “A lot of it is about ball security. C.P. does a lot of good things for us, and it’s Mike or (Wayne) Gallman. Those are guys you trust there in four-minute. Again, we didn’t get off the blocks. ...

“So, yeah, I’ll go back and look at it. What should I have done different? It’s all fair, but we trust Mike Davis. That’s why he’s in there. It’s about ball security, making the right decisions, making the right reads. That one is pretty obvious.”

With the Falcons (1-3) seeking their second win if the season, it was puzzling that Patterson, who scored all three of the team’s touchdowns, wasn’t in the game during the fourth. Surely his presence would’ve caused Washington to redirect some of its coverage in play-action.

Patterson wouldn’t bite when asked why he wasn’t called upon late in the game, but quarterback Matt Ryan defended his coach.

“I love our guys and I trust all of our guys when they’re in there that when their number is called, they’re going to make plays, and for the most part guys did today. We’ve just got to clean some things up and do things a little bit better.”

Even though Calvin Ridley had a couple of drops in the second half, the emergence of a deep passing attack for the first time this season was an encouraging sign for the Falcons. Rookie tight end Kyle Pitts, the No. 4 overall draft choice, could be a deep threat, too, if Atlanta made called on him to do so.

The defense was gassed at the end of the game and had no chance of containing mobile Washington quarterback Taylor Heinicke, who had plenty of time on the final touchdown to scramble left and wait for running back J.D. McKissic to come open in the right flats. Linebacker Deion Jones was near McKissic when he caught the ball but didn’t have a good enough angle to try and take out his feet with a diving tackle.

Cornerback Erik Harris had pass breakups in the third quarter and another in the fourth, but one of them was a sure interception that got away from him. Harris hurt his calf late in the game and was forced to the sideline.

Ridley, normally sure-handed, needs to improve his concentration on deep routes. A couple of missed plays could’ve made a big difference.

Smith had no updates on CB Isaiah Oliver (knee), P Cameron Nizialek (hamstring) and Harris on Monday. The Falcons are expected sign veteran P Dustin Colquitt off the practice squad with Nizialek unlikely to be ready this week. Nizialek handles kickoffs as well.

68,529: The announced paid attendance, but Mercedes-Benz Stadium wasn’t barely half full. The atmosphere at home games is lacking, and Atlanta fans are notorious for not showing up when the home team of any sport is struggling.

Make the most of a short week and get ready to face the New York Jets (1-3) in London. The Jets beat Tennessee on Sunday.