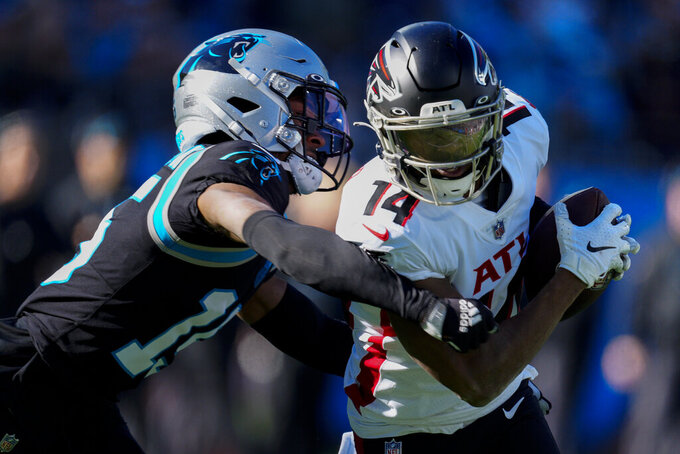 Tajae Sharpe missed Wednesday's practice after leaving last week's loss at San Francisco with a foot injury. Coach Arthur Smith referred to Sharpe's chances of returning for Sunday's game against the Detroit Lions as “tricky.” Sharpe has started six games this season, including the last two.

Gage has made perhaps the best bid to claim the role of Ryan's go-to wide receiver. It's a job which has remained fluid since the offseason trade of Julio Jones to Tennessee.

Calvin Ridley, who was expected to move up as the team's top wideout, has missed most of the season after announcing on his Twitter account on Oct. 31 he needs “to step away from football at this time and focus on my mental wellbeing.”

With only three regular-season games remaining, it has become increasingly unlikely Ridley will return this season after playing in only five games. Smith said Wednesday there was no update on Ridley's status.

Gage has helped fill the void. The fourth-year player has had four or more receptions in each of Atlanta’s last five games, and at least 60 yards receiving in the last four.

“It feels good to kind of get in the groove but the biggest thing is helping my team win games,” Gage said after Wednesday’s practice. “That’s the most rewarding thing for me, us coming out on top with wins.”

The Falcons (6-8) had repeated red-zone failures in the loss at San Francisco, leaving them on the brink of elimination from playoff contention. Gage provided a rare highlight in the 31-13 loss when he outfought Ambry Thomas for a 20-yard touchdown catch.

His recent surge may be a surprise to some. His true breakout came last season, when he set career highs with 72 catches for 786 yards and four touchdowns.

Gage started eight of 16 games last season, when he was often the No. 3 target behind Jones and Ridley. His role has changed in 2021, especially after Ridley needed time away from the team.

“I would say there has definitely been an up in my leadership role,” Gage said. “I try to be a little bit more vocal, try to talk to guys and get more involved in that role to help bring guys along. I think the more I do it, the more natural it becomes.”

Gage was slowed by an ankle injury suffered in Atlanta's Week 2 loss at Tampa Bay. He finally returned in Week 7 and has gained momentum this month.

“I think he’s really gotten back to where he’s playing like himself now,” Ryan said of Gage. “I thought he played really well for us the other day, but my confidence in him has always been high.”

Gage’s late-season surge is well-timed as he becomes an unrestricted free agent after the season.