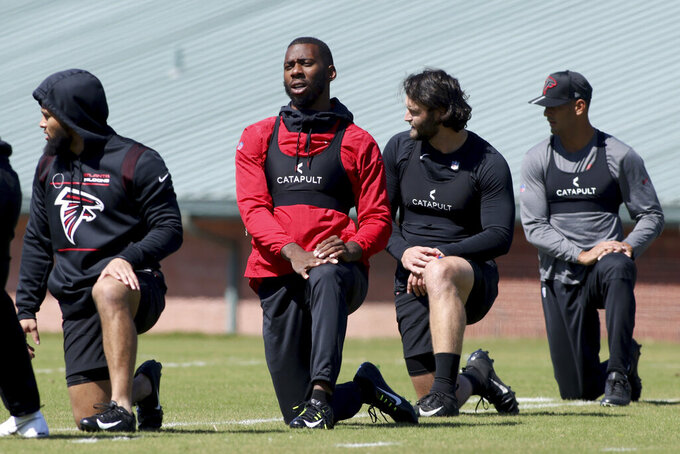 FLOWERY BRANCH, Ga. (AP) — It seemed so much easier for Atlanta Falcons general manager Terry Fontenot to plan for the NFL draft only one year ago.

Days before the 2021 NFL draft, his first with the Falcons, Fontenot already knew he’d be taking tight end Kyle Pitts with the No. 4 overall pick.

The Falcons have the eighth pick on Thursday night. Fontenot said the uncertainty at the top of this year's draft makes it difficult to predict which players will be available.

“When is the last time we sat here and everyone doesn’t know who the first and second pick are?” Fontenot said Tuesday. “It’s unique.”

One year ago, San Francisco's trade up to the No. 3 pick to select Trey Lance meant the first three picks were quarterbacks.

“We were like the first pick of the draft last year, because especially when San Francisco traded up, we basically knew the first three players that were going to come off the board,” Fontenot said.

There is much less certainty about the quarterbacks in this year's draft and which teams, including the Falcons, could look for help at the position in the first round.

After trading 14-year starter Matt Ryan to Indianapolis, the Falcons acquired veteran Marcus Mariota, who previously played for coach Arthur Smith when Smith was Tennessee's offensive coordinator. Mariota is expected to open the season as the starter, and he also could serve as a mentor to a rookie if the Falcons add a quarterback in the draft.

Pittsburgh’s Kenny Pickett and Liberty’s Malik Willis are regarded as the top quarterbacks. There is debate about which will be selected first and how high either will be taken.

When asked if he would be surprised if no quarterback is selected among the first 15 picks, Fontenot said: “It really is tough to anticipate this draft. ... If you know, you tell me.”

The Falcons have nine picks in the draft, including two selections each in the second, third and sixth rounds. They could look for a quarterback later in the draft or through free agency or a trade and wait to commit a first-round pick in 2023.

Alabama's Bryce Young and Ohio State's C.J. Stroud are part of what is anticipated to be a stronger quarterback class next year. Fontenot said “it's comical” to make those predictions a year ahead of time.

The Falcons need help at many positions. The most obvious needs are at edge rusher and wide receiver.

Fontenot says he'll look for the best player available but Smith said the team's needs can influence its decisions.

“If it’s even, certainly there’s a tendency to go more toward need,” Smith said.

“We try our best to anticipate what’s going to happen in front of us, but we have to be prepared for a lot of different variables,” Fontenot said, adding he's open to talks about trading up or down.

“I would say yes, there are so many more variables,” he said. “We just have to be prepared for every scenario.”