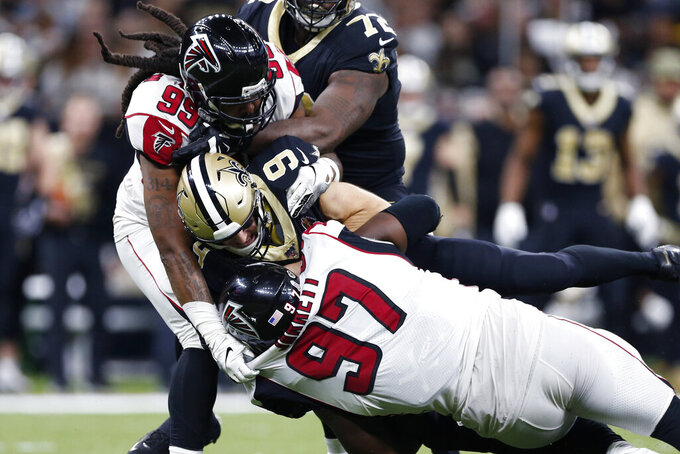 The coach suspects too much attention was paid to changes on his staff.

Whatever the reason for Atlanta's surprising 26-9 victory over NFC South-leading New Orleans on Sunday, the next challenge for Quinn's team is to play with better consistency in the second half of the season.

Team owner Arthur Blank has said he can't understand the uneven play by the Falcons (2-7) during games and from one week to another. The win over the Saints was the high mark of the season.

"This was the players and they made some excellent communication and had a terrific performance," Quinn said Monday. "I don't think anything should ever distract away from that."

Injuries to running back Devonta Freeman and tight end Austin Hooper may make it more difficult for Atlanta, which plays at Carolina on Sunday, to win two straight games. Quinn said he would know more about both players' status against the Panthers later in the week.

During Atlanta's bye week, Quinn announced changes to his staff before the Saints game. Most notably, wide receivers coach Raheem Morris was moved to the secondary.

"We're just fortunate that we're able to have some guys who can do that," Quinn said of his assistants. He said he didn't want the players' winning effort "to get glossed over."

Quinn took on the role as defensive coordinator before the season. He gave up some play-calling duties on defense before a loss to Arizona on Oct. 13. Linebackers coach Jeff Ulbrich and Morris are now calling the plays on defense.

The Falcons may have found some stability at placekicker with Younghoe Koo, who made four field goals, including a 48-yarder. Koo took over after 44-year-old Matt Bryant was inconsistent in his return to the team and was cut in the bye week. Giorgio Tavecchio couldn't hold the job after Bryant was released following last season.

The depth chart at running back suddenly lacks experience. Ito Smith, who had been Freeman's top backup, was placed on injured reserve last week. Freeman left the game in the third quarter with a foot sprain, leaving Brian Hill as this week's possible starter. Kenjon Barner has only two carries this season and has worked mainly as a return specialist. Qadree Ollison was active for the first time against the Saints.

Luke Stocker and center Alex Mack earned high marks from Quinn for their blocking in the running game against the Saints. Stocker and Jaeden Graham, who have combined for eight catches this season, would share time at tight end if Hooper can't play.

Cornerback Desmond Trufant missed his fourth consecutive game with a toe injury. Quinn said Trufant's toe "still had some soreness" so the hope again is that Trufant can return this week. Rookie Kendall Sheffield continues to take advantage of his playing time in Trufant's absence.

This week could be a test for the offense's depth. The Falcons could be forced to replace their leading rusher in Freeman and second-leading receiver in Hooper (knee). Defensive back Damontae Kazee and punter Ryan Allen also were treated for injuries during the game.

6 — After ranking last in the league with only seven sacks, the Falcons suddenly found their pass rush with six sacks, including 2½ by Grady Jarrett.

Falcons players showed they haven't given up on the season — or their coach. Now they must show they can deliver a winning performance in back-to-back weeks. The visit to Carolina is Atlanta's second of five straight games against NFC South rivals.