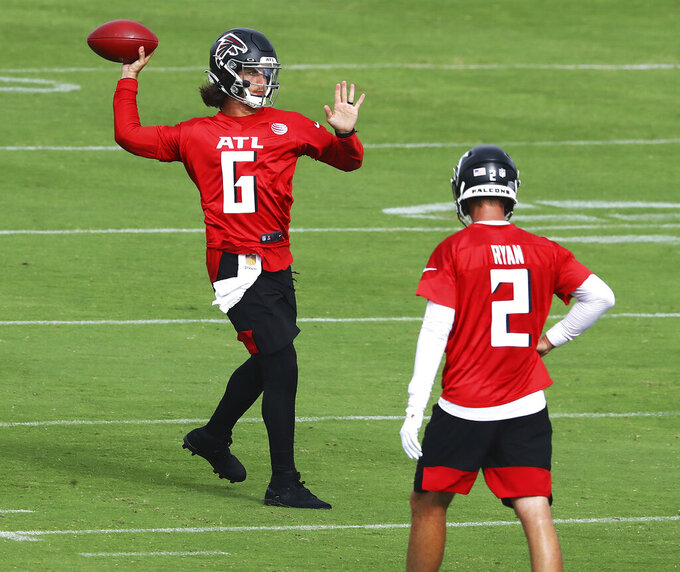 ATLANTA (AP) — The Atlanta Falcons cut former first-round pick Laquon Treadwell and two quarterbacks Saturday as they got down to the 53-man roster limit for the regular season.

Treadwell was the 23rd overall choice of the Vikings in 2016, but has yet to make much of an impact in the NFL. He played in 53 games with Minnesota, including 16 starts, and had 65 catches for 701 yards and two touchdowns before the team let him go after four seasons.

Treadwell signed with the Falcons in March.

“Although my time here was short it definitely was worth it,” Treadwell wrote on Twitter. “Great team, great city, great coaches! Take all my loses like a man."

The Falcons were left with two quarterbacks on the roster after cutting Kurt Benkert and recently signed Kyle Lauletta. Matt Ryan is heading into his 13th season as the starter, while 39-year-old Matt Schaub remains the backup.

There has been speculation that the Falcons might be interested in Josh Rosen, the No. 10 overall pick in the 2018 draft. He was traded after only one season with the Arizona Cardinals and released after spending 2019 with the Miami Dolphins.

Benkert was on the practice squad in 2018 and missed all of last season after sustaining a toe injury during the preseason.

“One way or another I am good and I am blessed," Benkert said on Twitter. "It’s a marathon that I won’t stop running for."

Defensive end Steven Means is on the COVID-19 list and doesn't count against the 53-man roster. Cornerback Jordan Miller will spend the first three games on the suspended list as he completes his punishment for violating the league’s performance-enhancing substance policy late last season.

The Falcons open the season Sept. 13 at home against the Seattle Seahawks.

A look at the 53-man roster, which will be augmented by a practice squad that has increased to 16 players because of the coronavirus pandemic: