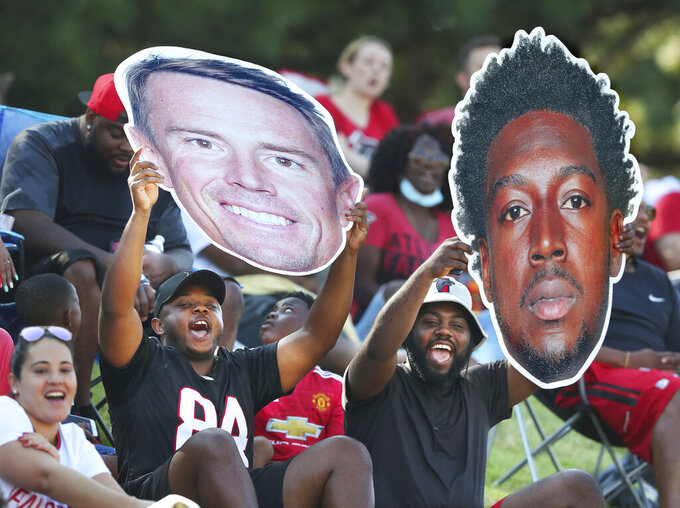 FILE - Atlanta Falcons fans cheer for Matt Ryan and Calvin Ridley from the hill overlooking the practice fields during the fourth day of NFL football training camp practice on Sunday, Aug. 1, 2021, in Flowery Branch, Ga. Atlanta Falcons owner Arthur Blank says the team must have a succession plan at quarterback even while counting on Matt Ryan to continue as the starter in 2022. The Falcons face more complicated decisions at wide receiver, where Calvin Ridley's status remains uncertain. (Curtis Compton/Atlanta Journal-Constitution via AP, File)

ATLANTA (AP) — Atlanta Falcons owner Arthur Blank says the team must have a succession plan at quarterback even while Matt Ryan appears set to continue as the starter in 2022.

Blank, in Los Angeles for Sunday's Super Bowl, said the team still has not had direct conversations with Ridley since the Falcons' top wide receiver missed the final 11 games last season while addressing mental health issues.

“It’s a matter of HIPBA regulations in terms to what we have access to or should have access to,” Blank said Wednesday night. “We’re here to support Calvin as he goes through this journey he’s on and it’s a difficult journey.”

Following Julio Jones' trade to Tennessee before the season, Ridley entered 2021 as Atlanta's top target for Ryan. That changed after Ridley was a last-minute scratch before the 19-13 loss to Carolina on Oct. 31.

“As an organization we’ve done the best job we could just to support Calvin and do everything we can for him,” general manager Terry Fontenot said after the season.

The Falcons can only hope Ridley returns for next season.

“Yeah, sure, absolutely,” Blank said. “I mean, who wouldn’t want him? He’s a great player. He’s a great teammate. He and Matt had a wonderful chemistry and played well together. He’s able to succeed at a very high level. And he’s always practiced hard and played hard.”

The Falcons must make plans for the April 28-30 NFL draft and free agency. They will need to know if they can plan for Ridley.

“Where that sits with him, I don’t know,” Blank said. “We haven’t talked to him directly. At some point ... we have to have a clear understanding about that. I think he and his agents certainly understand that as well.”

Ryan completed 67% of his passes, topping three of his last four seasons. He threw for 3,968 yards, barely missing his 11th consecutive 4,000-yard season.

Ryan will be 37 next season and has said he hopes to still be playing at 40. His potential $48.7 million cap hit in 2022 helps to secure his immediate future in Atlanta.

“I really feel fortunate to have been here as long as I have,” Ryan said after the season. “You know, but I’m optimistic, I really am. I want to be here. I feel good about this group of guys, coaching staff, everybody, the direction it’s going.”

Blank likes Ryan's production and durability but says the team must plan for an eventual successor as the quarterback enters his 15th season.

“I think he is is still performing at a very high level and is very capable of winning in this league,” said Blank of Ryan. "He’s in great shape and he thinks he can play on for some number of years, which is wonderful.

“I’ll make this clear, at some point we do need to understand that Father Time will get us all and at some point we’ll have to make a clear succession plan for the next quarterback. Teams that have done that successfully are in a really good position in the league. The ones that haven’t are ones that struggle for a number of years and slip in and out of different quarterbacks.”