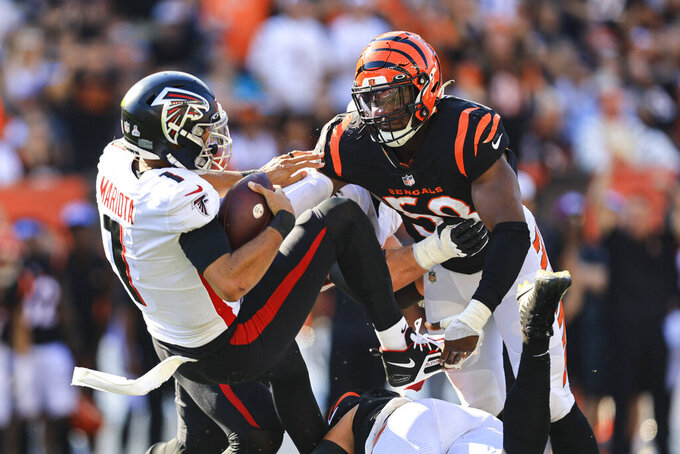 The Carolina Panthers are in a major state of flux.

In the pitiful NFC South, both of these scuffling teams are still contenders.

Every team in the NFL's weakest division has a losing record. The Falcons (3-4) moved into first place when Tampa Bay (3-5) lost to Baltimore on Thursday night, while the Panthers (2-5) and New Orleans are just a game behind.

“We do understand that it is a division game,” Falcons quarterback Marcus Mariota said, looking ahead to Sunday's home contest against the Panthers. "You’ve got to create somewhat of a lead in your division, you want to create separation. This is where it starts.”

Atlanta knew it could be in for a long season after trading quarterback Matt Ryan and taking a huge salary cap hit.

But the Falcons probably didn't envision the rest of the division coming along for the ride.

“Honestly, I don’t try to think about anything other than winning this game,” Mariota said. “I try to not make it more than what it is.”

The Panthers are hanging around, too, even after firing coach Matt Rhule and trading star running back Christian McCaffrey to the 49ers for a haul of draft picks.

Carolina is coming off its best performance of the season, a 21-3 upset of Tom Brady and the struggling Buccaneers.

Panthers interim coach Steve Wilks took over a team that was ranked last in offense two weeks ago and made it a point to find an identity.

That meant running the ball.

D’Onta Foreman and Chuba Hubbard combined to rush for 181 yards on the ground against the Bucs. Hubbard was ruled out for Sunday's game with an ankle injury, but the Panthers still intend to run the ball against the Falcons to set up the play-action pass.

“That is the mindset that I wanted to create up front — just blue collar, hard working and pushing the pile,” Wilks said.

The Falcons know exactly what he's talking about.

With few threats in the passing game, coach Arthur Smith has steadfastly refused to open things up for quarterback Marcus Mariota.

The lack of a passing game has made All-Pro tight end Kyle Pitts an afterthought in the Falcons' offense.

The second-year player has just 16 catches for 178 yards and a touchdown, far off the pace he produced in his stellar rookie season.

Last week, Pitts was held to a season-low 9 yards on three receptions in a 35-17 loss at Cincinnati.

With so much emphasis on the running game, the Falcons have just three players with double-figure receptions on the season.

This year's No. 1 pick, Drake London, leads the team with some very ordinary numbers: 26 catches for 315 yards and two scores.

“There are certain games where we haven’t had to pass that much,” Smith said. “Every game, you go in there to have balance and we have plays and those guys are a big part of our offense.”

Baker Mayfield will be active for the game, but the Panthers are sticking with Walker as their starting quarterback.

Walker kept the No. 1 spot after completing 16 of 22 passes for 177 yards and two scores against Tampa Bay.

Walker, who was undrafted, is now ahead of the QB taken No. 1 overall in the 2018 draft.

The Panthers also have the No. 3 pick from that draft, Sam Darnold, who has returned to practice but remains on injured reserve.

“I’m not going to go into details on the conversations,” Wilks said of his QB depth chart. “Each and every week, I meet with all three of those guys ... so we’re all in the room together. I don’t try to talk to each of them separately because I want to make sure we have great communication and clarity on what I’m saying to the group."

Wilks said Mayfield was aware of "exactly where we were going this week, and he knows his role, and he was fine with that.”

No matter who lines up at quarterback for the Panthers, they are going to be facing a secondary that is especially vulnerable because of a rash of injuries.

Cornerback Casey Hayward is on injured reserve with a shoulder injury, and two other starters — corner A.J. Terrell (hamstring) and safety Jaylinn Hawkins (concussion) — went down against the Bengals and won't be able to suit up Sunday.

The situation has been so desperate that Smith considered moving running back Avery Williams to the other side of the line.

The Panthers' biggest area of concern on offense has been third down.

The Falcons also have done a much better job on third down than the Panthers. Atlanta ranks fifth in the NFL with a 44% conversion rate.