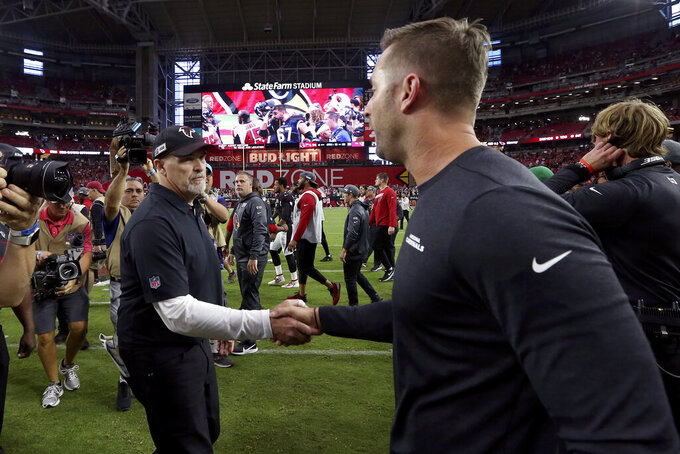 FLOWERY BRANCH, Ga. (AP) — For the second straight season, an abysmal start has made the playoffs a distant dream for the Atlanta Falcons even before the midpoint of the season.

That's bad news for coach Dan Quinn, who may have difficulty saving his job if he can't find a way to avoid a second straight losing season.

"You can't say you shouldn't be where you are," Quinn said Wednesday. "This is where we are. I would say you're frustrated but you want to do something about it. ... It's certainly my job to fix the issues that come up."

The Falcons gave up a combined 87 points in losses at Houston and Arizona the past two weeks. That's especially ominous for Quinn, who this season took over control of the defense.

The Falcons have two straight home games against the Rams and Seattle before their bye week.

Allen said Quinn "is not the guy who bears down and yells. ... That's even tough for me to watch from the sideline because I'm like man, I want to be cussing people out."

Quarterback Matt Ryan said Quinn "has been awesome" because "he's so consistent day in and day out.

"His message is always different. It's fresh and it hits home to where we're at as a team and he's done that the entire time ... he's been here."

Quinn is 37-33 in five seasons. He fired all three coordinators after last season while taking on the role of defensive coordinator.

Secondary coach Jerome Henderson, in his fourth season in Atlanta, said Quinn "still remains positive and energetic and wants to make sure we're giving our guys 1,000 percent of ourselves and our energy ... despite the circumstance."

The losses and defensive woes are troubling for a coach who in 2016 led Atlanta to the Super Bowl and in 2017 added another playoff win.

The back-to-back winning seasons made Quinn and general manager Thomas Dimitroff look like a winning leadership team that could produce long-term success.

Now, Falcons owner Arthur Blank may have to decide if leadership changes are necessary to put the team back on a winning course.

Last season, a rash of injuries earned much of the blame when a 1-4 start led to a 7-9 finish.

The defense again lost safety Keanu Neal to a season-ending injury last month, but the Falcons have come up with new ways to lose. Last week's 34-33 loss to the Cardinals was capped by Matt Bryant's missed extra point which would have tied the game.

Quinn says the team's misfortunes "are maddening and I don't have a good reason for why."

"Sometimes the ball will bounce your way and you go 'That was cool,'" he said. "The other times you've got to be — fill in the blank."

"We're going to fight for him."