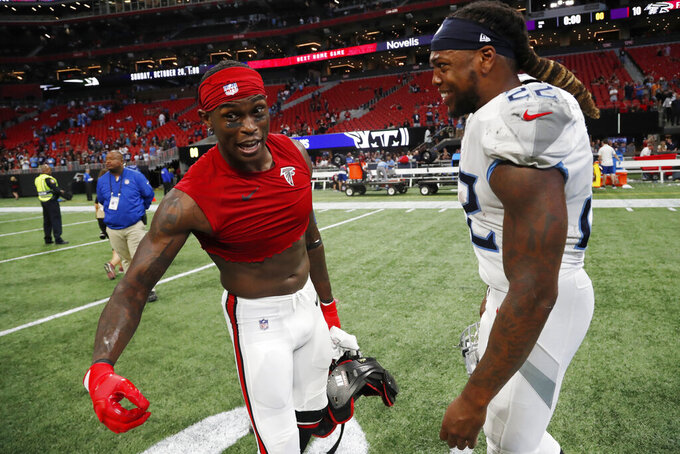 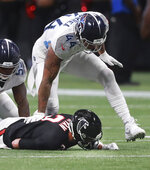 ATLANTA (AP) — The Atlanta Falcons are hitting the road.

With boos still echoing in Mercedes-Benz Stadium, it may be a good time to get away for a while.

Atlanta (1-3) plays its next two games away from home, including Sunday's visit to Houston. Coach Dan Quinn said Monday the team will stay on the road before its Oct. 13 game at Arizona.

"The way I look at it, that's another eight or 10 days for us to be together and get our act together and play ball like we're capable of," Quinn said.

Falcons fans, Quinn and players, including receiver Julio Jones, were bewildered by the team's poor play in Sunday's 24-10 loss to Tennessee.

"I don't understand," Jones said. "We're a high-powered offense and we scored 10 points today. I can't tell you how we scored only 10 points."

"I certainly don't feel like we are a 1-3 team," he said before adding, "that's where we are and that's who we are until we change that."

Atlanta is alone in last place in the NFC South after every other team in the division won.

Quinn's job status immediately became a hot topic after his team was outclassed by the Titans, who had lost two straight.

Quinn was asked if radical changes are needed.

"I wouldn't say radical, but yeah, when you're not playing well you look at everything," Quinn said.

Through four games, there has been the need for plenty of self-examination. Quinn has been forced to seek answers for too many penalties and turnovers , slow starts and now, too few points.

As Quinn said, the time is now to find fixes. He is coming off a 7-9 finish in 2018 and needs to avoid a second straight losing season.

"This is where you get to prove it," he said.

Matt Ryan ranks second in the league with 1,325 yards passing, behind only Kansas City's Patrick Mahomes. Ryan's favorite targets against the Titans were tight end Austin Hooper and Mohamed Sanu. Each had nine catches.

Despite Ryan's stats, Atlanta is tied for 25th with its average of 17.5 points. When big yards don't produce big points, the blame usually lands on the coaching staff.

The Falcons couldn't record a sack against a Titans offensive line that gave up 17 sacks in its first three games. Atlanta has only five sacks through four games. Defensive tackle Grady Jarrett has two. Takk McKinley and Vic Beasley Jr. had occasional pressure against Marcus Mariota, but the Falcons have to find a way to complete more of those plays with sacks.

Hooper set a career high with 130 yards receiving. Sanu's nine catches were his most in a game since 2016.

One week after setting a season high with 88 yards rushing at Indianapolis, Devonta Freeman was held to 28 yards on 12 carries. All the blame for the lackluster running game does not rest on Freeman, as poor blocking failed to create running lanes. Still, the Falcons may expand backup Ito Smith's role if he continues to show more explosive potential.

The Falcons continue to be frustrated in their attempt to find continuity on the offensive line. Right guard Jamon Brown (concussion) and center Alex Mack (left elbow) left the game. Mack returned with the elbow heavily wrapped, but his status for this week remains uncertain. Rookie first-round pick Chris Lindstrom is on injured reserve with a broken left foot. The Falcons hope Lindstrom, who won a starting job at right guard, can return in the second half of the season.

65-10: The Falcons continue to battle slow starts. They trailed the Titans 24-7 at halftime and have been outscored 65-10 in the first half of their three losses.

The Falcons travel to Houston to face the Texans on Sunday, the first stop of their long trip.