Falcons' Ridley 'flying around' in return after missing week 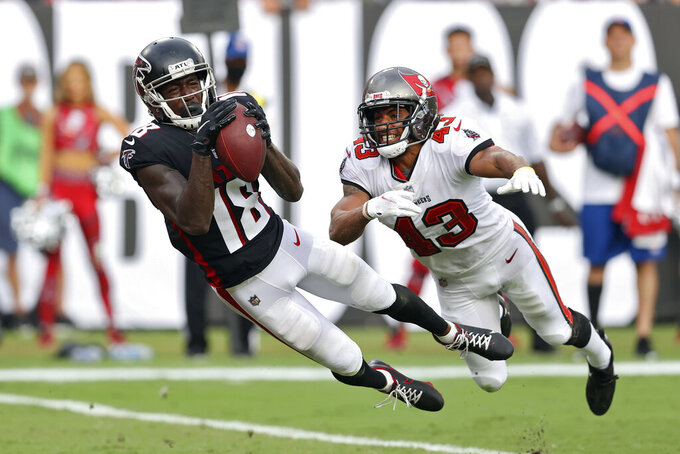 FILE - Atlanta Falcons wide receiver Calvin Ridley (18) makes a diving touchdown reception in front of Tampa Bay Buccaneers defensive back Ross Cockrell (43) during the second half of an NFL football game in Tampa, Fla., in this Sunday, Sept. 19, 2021, file photo. Matt Ryan is looking to see the Atlanta Falcons' offense continue its improvement when the team returns from its bye week for Sunday's game in Miami. Having top target Calvin Ridley back in the lineup should help the offense. Ryan said Wednesday, Oct. 20, 2021, Ridley “was flying around” in his return to practice after missing the Falcons' last game for personal reasons. (AP Photo/Mark LoMoglio, File)

FLOWERY BRANCH, Ga. (AP) — Matt Ryan is looking to see more growth from the offense when the Atlanta Falcons, refreshed after their bye week, play Sunday at Miami.

Ryan said Wednesday that Ridley “was flying around” in his return to practice after missing the Falcons' previous game for personal reasons.

Ryan kept the offense moving even without Ridley and receiver Russell Gage in Atlanta's 27-20 win over the New York Jets in London on Oct. 10. With rookie tight end Kyle Pitts posting his first 100-yard game and catching his first scoring pass, Ryan threw for 342 yards and two touchdowns in the victory.

“I think we’ve been getting better as the year has gone on, which is good,” Ryan said Wednesday.

Ridley, who wasn't with the team for the trip to London, wasn't available for interviews on Wednesday.

Ridley and Gage, another usual starter who missed the game with an ankle injury, returned to practice on Monday. On Wednesday, coach Arthur Smith said Ridley “looked like he always did.”

Ryan said he has seen improvement from the offense, but said “I think we've still got a long way to go.”

The Falcons (2-3) have won two of their past three games following an 0-2 start under Smith, the first-year coach.

The play of the fill-in wide receivers in the win over the Jets was especially encouraging for Ryan. Though Pitts, who had nine catches for 119 yards earned the most attention, Tajae Sharpe had four catches for 53 yards. Christian Blake and Olamide Zaccheaus each had two catches.

“I’m proud of the way the other wide receivers stepped up and filled that void,” Ryan said. "It’s a really good group we have, an unselfish group.

“It’s cool to see as a teammate. You want a bond of guys that are encouraging others and also want to do well for themselves. It should create confidence and belief that when their time comes they’re ready to go.”

Despite missing the game, Ridley still leads the Falcons with 27 receptions and 42 targets. He has assumed the role of No. 1 receiver following Julio Jones' trade to Tennessee.

Ridley drew criticism from Smith after having two drops in a 34-30 loss to Washington on Oct. 3.

“We expect more and Calvin knows that,” Smith said one day after the loss.

There are high expectations for Ridley, the 2018 first-round draft pick from Alabama. Even while playing in Jones' shadow, Ridley had production expected from a No. 1 receiver. He had a combined 26 touchdown catches his first three seasons and set career highs with 90 receptions for 1,374 yards last season.

Ridley averaged 15.3 yards per catch last season. His 2021 average is a career-low 9.4. Even so, his targets rose each week, from eight in the opener against Philadelphia to 13 against Washington.

Ridley and Gage also participated in Wednesday's practice and may return to the starting lineup against Miami.

Pitts' breakout adds to Ryan's wide range of options. The tight end leads Atlanta with 308 yards on 24 catches. Running back Cordarrelle Patterson has 25 catches for 295 yards and four touchdowns.

NOTES: Smith said rookie LG Jalen Mayfield, who has started the first five games, will not be moving to address a need at right tackle. Mayfield worked at right tackle in training camp before moving after LG Josh Andrews was placed on the injured list with a broken hand. Andrews returned just as starting RT Kaleb McGary was placed on the COVID-19 reserve list on Monday. With McGary unlikely to return this week, Smith said he's confident Jason Spriggs can move up at tackle, with possible support from Colby Gossett.