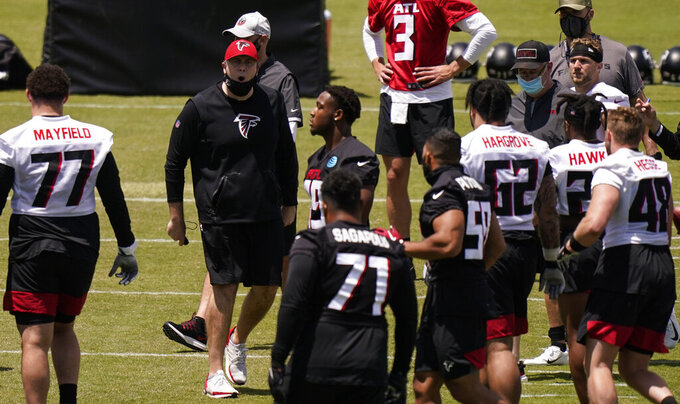 ATLANTA (AP) — One day after celebrating his 36th birthday, Matt Ryan acknowledged his age has many wondering how long he'll continue to lead the Atlanta Falcons offense.

He also knows it was an especially hot topic before the NFL draft. Many believed the Falcons should have used the No. 4 overall selection on a quarterback to be trained as Ryan's successor. Instead, the Falcons selected tight end Kyle Pitts to give Ryan another playmaker.

As Ryan prepares for a new season with new coach Arthur Smith, he says he doesn't worry about fans or critics who may be eager for a change at quarterback.

“I think in one respect you understand that if you play well for long enough, these are the conversations that are going to come up,” Ryan said Tuesday. “I understand I’m not going to play forever, but I also have the mindset that I can still play really well and have a lot of good football in front of me.”

Thanks in part to social media, Ryan couldn't avoid the public debate before the draft about the Falcons' quarterback situation.

“It’s harder than ever now to avoid the noise,” he said.

If Ryan needed a vote of confidence from Smith and new general manager Terry Fontenot, it came when the team did not draft a quarterback.

Ryan was the only quarterback on the depth chart when the team selected Pitts, the tight end from Florida. The team then signed free agent quarterback A.J. McCarron, who was a backup in Houston the past two seasons.

Clearly, Ryan is still the starter and is the most accomplished quarterback in franchise history. His production has been more consistent than the team's success.

“Whether it’s year 1 or year 13, whatever it is, you’re constantly trying to prove that you’re the right person for this spot,” he said. “I was told at a young age from some veteran players that in this locker room you don’t own a locker. You rent it. So I try to pay the rent on time all the time and do the best I can do to stay in that spot.”

Ryan has been durable, missing only three games in his career. He started every game last season, when his quarterback rating (93.3) was significantly below his 117.1 rating in his 2016 MVP season. It was in line with his 94.5 career average.

He completed 65% of his passes, again nearly matching his career average, while passing for 4,581 yards with 26 touchdowns and 11 interceptions.

Ryan said Monday's birthday celebration was a low-key day that included an early dinner with his kids.

“They got some chicken fingers and chilled out,” he said. “That was kind of it, a nice day spent with my family.”

Ryan added that birthdays “were more fun when you were in your 20s.”

Another change with age: Ryan says he hates losing more than ever.

“You want to win but I really hated losing more than I love winning,” he said. “I think that only intensifies the older you get because you realize your opportunities are limited. I probably appreciate the opportunity more now knowing I’m not in the first quarter or first half of my career. And so it makes every chance you get all the more fun.”