Falcons seek to stay in playoff hunt in game at Bills 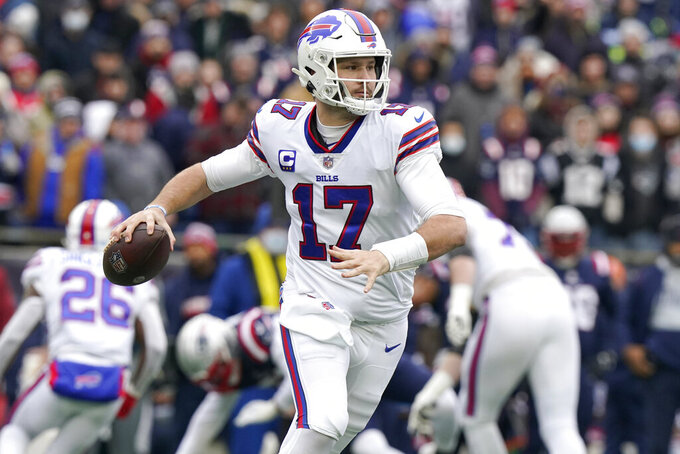 Buffalo Bills quarterback Josh Allen (17) looks to pass during the first half of an NFL football game against the New England Patriots, Sunday, Dec. 26, 2021, in Foxborough, Mass. (AP Photo/Steven Senne)

BETTING LINE: Buffalo by 14 1/2, according to FanDuel SportsBook.

TURNOVER DIFFERENTIAL: Falcons minus-5; Bills plus-10

FALCONS PLAYER TO WATCH: RB/WR Cordarrelle Patterson. Though limited to 32 yards rushing in his past two games, Patterson’s physical running style has the potential to power through a leaky run defense which has allowed 659 yards and seven TDs rushing over its past four games.

BILLS PLAYER TO WATCH: RB Devin Singletary. Buffalo’s pedestrian running attack has gained legs since Singletary took over the lead role midway through a 33-27 OT loss to Tampa Bay. In 10 quarters since, Singletary has combined for 177 yards rushing and two TDs and 86 yards receiving.

KEY INJURIES: Falcons DE Marlon Davison, DT Tyeler Davison, LBs Brandon Copeland, James Vaughters and Dorian Etheridge are all on the reserve/COVID-19 list. Worth monitoring: CB Avery Williams, who was limited in practice on Wednesday with a groin injury. ... The Bills activated WRs Cole Beasley and Gabriel Davis, OL Jon Feliciano and DE A.J. Epenesa off the reserve/COVID-19 list, with all in position to play Sunday.

STATS AND STUFF: The Falcons would be eliminated from playoff contention with a loss. ... Atlanta hasn’t won consecutive games since beating Carolina and Denver in Weeks 8 and 9 of last season. ... Atlanta hasn’t won eight or more games since finishing 10-7 in 2017. ... Pitts’ 64 catches are tied for third with the Giants’ Evan Engram (2017) for most in the NFL by a rookie tight end. Philadelphia’s Keith Jackson (1988) is first with 81 catches followed by the Giants' Jeremy Shockey (2002) with 74. ... Pitts has 949 yards receiving, which ranks second on the NFL rookie tight ends list, behind only Chicago’s Mike Ditka, who had 1,076 in 1961. ... QB Matt Ryan’s 366 career touchdowns passing are tied with Eli Manning for ninth on the NFL list. Ryan is also one touchdown pass from becoming the NFL’s fifth player with 20 or more in 13 consecutive seasons. ... The Falcons have takeaways in 11 straight games, the NFL’s longest active streak. It’s Atlanta’s longest run since an 11-week stretch spanning the 2011 and ’12 seasons. ... LB Foyesade Oluokun was credited with 14 tackles last week and ranks second in the NFL with a career-best 166. He is one of four players to make 10 or more tackles in 10 games this season. ... The Bills have numerous scenarios to clinch their third consecutive playoff berth this weekend, with the simplest having Buffalo win and the Baltimore Ravens either lose or tie. ... Buffalo has the tiebreaking edge over New England (9-6) to win its second consecutive AFC East title, and can do so by simply winning its final two games. ... The Bills are in position to win 10 or more games in three consecutive seasons for the first time since a four-year run spanning their four-consecutive Super Bowl appearances — all losses — from 1990 to ’93. ... QB Josh Allen is the NFL’s first player with 4,000 yards passing, 30 TDs passing and 600 yards rushing in a season. ... With 101 TDs passing and 29 rushing, Allen is also the first player to top 100 passing and 20 rushing over the first four years of his career. ... Allen improved to 18-4 in games he doesn’t commit a turnover last weekend. The turnover-free outing ended a seven-game stretch in which he combined for nine interceptions and two fumbles. ... WR Isaiah McKenzie had career bests with a team-leading 11 catches for 125 yards, and scored a TD with Beasley and Davis sidelined last weekend. ... Buffalo is 6-0 when scoring a TD on its opening drive, and 8-1 when scoring a TD rushing this season. ... Buffalo is 1-6 when trailing at any juncture of a game this year. ... S Micah Hyde had two interceptions last weekend, which marked the second two-pick game of his career. ... The Bills limited New England to convert 1 of 10 third-down opportunities, but allowed the Patriots to convert 5 of 6 fourth-down attempts. ... In nine wins this season, the Bills have allowed 110 points, forced 26 takeaways (eight fumbles, 18 interceptions) and generated 22 sacks. In six losses, Buffalo has allowed 154 points, forced three takeaways (two fumbles, one interception) and generated six sacks.

FANTASY TIP: With his entire receiving group set to return, Allen is three TDs passing from matching the team's single-season record of 37 he set last season. There’s a good chance that could happen against a Falcons defense tied for 30th in the NFL in having allowed 28 TDs passing this year.