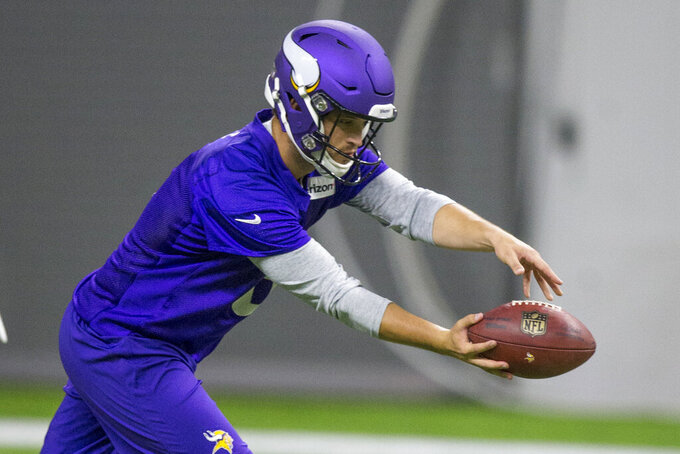 FILE - In this June 11, 2019, file photo, then-Minnesota Vikings punter Matt Wile punts during drills at the team's NFL football training facility in Eagan, Minn. The Atlanta Falcons have a new backup plan if punter Matt Bosher hasn’t recovered from a groin injury by Sunday’s game at Indianapolis. Matt Wile worked on punts and kickoffs on Wednesday, Sept. 18, 20919, one day after he was signed to the practice squad. Wile was Minnesota’s punter in 2018, and he spent time with the Falcons in 2016. (AP Photo/Andy Clayton- King, File)

Matt Wile worked on punts and kickoffs on Wednesday, one day after he was signed to the practice squad. Wile was Minnesota's punter in 2018 , and he spent time with the Falcons in 2016. He was cut by the Vikings in the preseason.

"Having experience not only here but elsewhere was a big piece of it," said Falcons coach Dan Quinn of the decision to sign Wile following punter auditions.

Bosher also normally handles kickoffs and is the holder on field goals and extra points.

The Falcons were forced to consider dramatic last-minute adjustments after Bosher strained his groin during warmups before last week's win over Philadelphia . Kicker Matt Bryant had to handle kickoffs, a duty he hasn't regularly held in a decade. Bosher punted despite being obviously limited by the injury.

The Falcons even had wide receiver Mohamed Sanu practice kickoffs in pregame warmups.

How close was Sanu to kicking off?

That's not the sort of pregame drama a coach enjoys.

Quinn remained optimistic that Bosher could be active against the Colts. He said he'll give Bosher the full week to recover.

"We definitely have confidence in Bosh as the punter but we'll see what it looks like at the end of the week," Quinn said. "I have confidence. I would never bet against Bosher in any way."

Bosher has missed only one game in nine seasons in Atlanta. His career average of 45.7 yards per punt is a franchise record.

The Falcons would have to have full confidence in Bosher to avoid a repeat of the field-advantage setbacks caused by the makeshift kicking plan last week. The longest of Bosher's three punts carried only 42 yards, and none of Bryant's kickoffs reached the end zone.

Bosher attended Wednesday's practice, but did not participate while Wile handled the punts in the sessions open to reporters.

"I'm just training and preparing like I'm going to play, but I don't know exactly what is going to happen," Wile said.

Wile has experience kicking off and holding on extra points and field goals. He said he "felt pretty good hitting" kickoffs on Wednesday.