Falk goes from practice squad to sudden starter for Jets 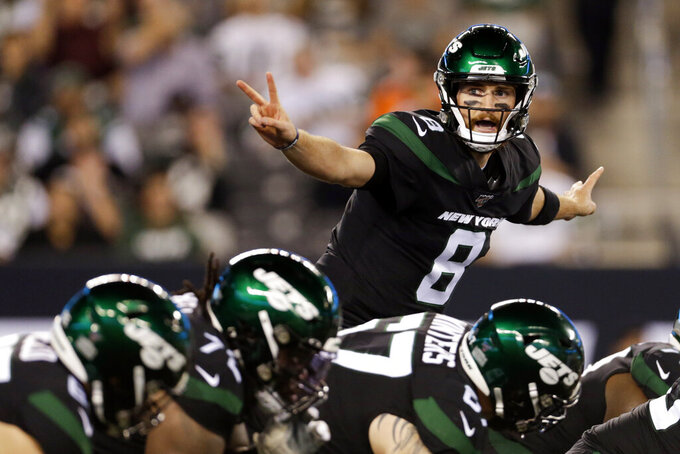 FILE - In this Monday, Sept. 16, 2019, file photo, New York Jets' quarterback Luke Falk signals at the line of scrimmage during the second half of an NFL football game against the Cleveland Browns in East Rutherford, N.J. Falk was merely a practice squad quarterback a week ago. But with Sam Darnold still sidelined by mononucleosis and Trevor Siemian out for the season with an ankle injury, he is the Jets' starting quarterback, and against the New England Patriots, of all opponents. (AP Photo/Adam Hunger, File)

FLORHAM PARK, N.J. (AP) — Luke Falk was merely a practice squad quarterback a week ago, a guy whose name with which some New York Jets fans might not even have been familiar.

Well, they all know it now.

With Sam Darnold still sidelined by mononucleosis and Trevor Siemian out for the season with an ankle injury, Falk is the Jets' starting quarterback — and against the New England Patriots, of all opponents.

"Yeah, it's been a bit of a whirlwind, but it's starting to slow down," Falk said. "I'm excited for the opportunity. I just want to go out there and do my job and help my team win."

He'll also have to do it against his childhood idol, Tom Brady.

He was among the Titans' final camp cuts last year, and then claimed off waivers by Miami and then-coach Adam Gase. Falk was waived by the Dolphins in May, and Gase jumped at the chance to reunite with him in New York.

Now, Falk will make his first NFL start against a team that has outscored opponents 76-3 in its first two games. He'll also try to help prevent the Jets from falling into an 0-3 hole before entering their bye-week break.

"You have to realize it's just football," Falk said. "I've been playing this sport for a long time. Obviously, not at this level, but you have to keep simple things simple, go out and execute the game plan and put the ball in play.

"Ultimately, you have to focus on the small things, not get too wrapped up in the whole big picture, I guess."

The Jets are massive underdogs against the Patriots, with the line growing to as many as 22½ points in some books, but Gase has no concerns about Falk maintaining his cool, calm demeanor.

"Trust me, if you were around him, you wouldn't worry about it," Gase said. "It's just the way he is. He's built that way."

Falk is in this position because of a series of unexpected events over the past week. Darnold was diagnosed last week with mononucleosis, an illness that will keep him out for at least one more game. Siemian stepped in as the starter against Cleveland last Monday night, but was hurt in the second quarter.

Falk stepped in — to chants of "Luuuuke!" at MetLife Stadium — and went 20 of 25 for 198 yards after replacing Siemian in the 23-3 loss. Only three of those passes went for 20 yards of more, including a 36-yarder to Robby Anderson, as Gase's offense went to a mostly short passing game. But Falk still became just the third NFL quarterback since the 1970 merger to post at least an 80% completion rate in his first game with at least 20 attempts, joining Jacksonville's Gardner Minshew (88.0%, 2019) and Philadelphia's Nate Sudfeld (82.6%, 2017).

"He has really good command, he's an accurate passer, he knows how to get us in and out of the right plays," offensive coordinator Dowell Loggains said. "He did a nice job in the game."

Loggains didn't anticipate using a reduced package of plays for Falk just because it's his first start.

"Luke had the advantage of sitting and watching a lot last year (in Miami) and going through another offseason of learning, and he's going to be a step ahead because he's been in the system longer than a lot of people on the roster right now," Loggains said. "He's been in it, he knows it."

Falk is also no stranger to beating the odds.

The native of Logan, Utah, was a walk-on at Washington State, redshirted his freshman year, and went from the backup to sudden starter in 2014 when Connor Halliday was injured. Falk then became one of the most prolific passers in college football over the next three seasons, finishing as the Pac-12's career leader in touchdown passes, yards passing, completions, completion percentage and attempts.

Despite the gaudy numbers and success in college, he lasted until the third day of the draft and was the ninth quarterback taken in that class.

None of that matters now, of course. Not with a big game coming up against an AFC East rival.

"We haven't lost a beat with him, and I think that's important," center Ryan Kalil said. "You saw how he finished out the game the other day. I think he gives us a good shot of making some explosive plays and putting us in the right situations. He's shown it all week, and we're excited to get out there with him and see what he can do."