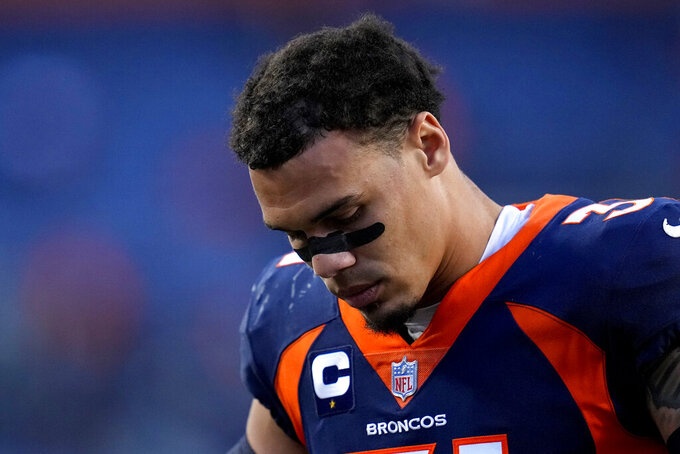 Every week for the past two seasons, NFL players take the field wearing social justice messages on their helmets, and “It Takes All of Us” and “End Racism” are stenciled in the end zones as part of the league’s Inspire Change platform.

The fallout from Jon Gruden’s emails has many questioning what it will take to really change the culture in the NFL.

“I can’t say that I was surprised at all that that kind of dialogue is happening behind the scenes,” three-time Pro Bowl safety Malcolm Jenkins said on the AP Pro Football Podcast. “I think that we understand the culture of the NFL and we can put ‘Inspire Change’ logos all over the field and create logos all we want, but until you actually change what leadership looks like, you can’t expect to change the culture.”

In a sport with about 70% of the players Black, more than 80% of head coaches (27 of 32) and general managers (also 27 of 32) are white. Among principal owners, only Jacksonville’s Shad Khan and Buffalo’s Kim Pegula are members of minorities.

“In the case of Jon Gruden, obviously it’s very disappointing to the people who respected him, look up to him and the man he was to our league,” Jenkins said. “But I think if we focus only on Jon Gruden, then we miss the bigger picture, which is that he was able to exist like that because the culture around him accepted it. When he sent those emails, nobody raised a red flag, nobody brought it to anybody’s attention. It was a normal thing.

"And I think that’s the culture behind the scenes that we need to change. And so again, we can clap our hands at all of the pageantry that we’ve done now as everybody’s kind of come to this social justice narrative, but until you start to see a change in leadership, whether it be more Black coaches, more Black GMs, a diversity in ownership, then I don’t know how we expect the culture of the NFL to change.”

“A key learning from working on these issues over the past three decades is that diversity is a fact, inclusion is a choice,” Vincent told the AP. “Collectively, a necessary decision to be made is that inclusion matters. Inclusion, whether that is race, gender, sexual orientation, age or otherwise, leads to better decisions, outcomes, and impact. Malcolm is spot on. These recent public revelations are a call for culture change and taking action.”

Denver Broncos safety Justin Simmons says the NFL has made progress in recent years, but more needs to be done.

“Guys in the locker room talk about that stuff, man,” Simmons said about racist views coming from people in leadership positions. “I think that’s why it’s important that we’ve been putting a spotlight on (it) in the past few years, especially in the NFL. We have the logos on the backs of the helmets and in the backs of the end zones. I think that’s why it’s important to have different cultures in those positions, right? Because you’re not getting it all from one set of any type of person.

Hall of Fame wide receiver Jerry Rice played for Gruden in Oakland after leaving the San Francisco 49ers. He said he was “shocked” to hear Gruden expressed racist, homophobic and misogynistic thoughts in emails he wrote from 2011-18 to then-Washington club executive Bruce Allen. At the time, Gruden was an ESPN analyst between coaching jobs.

“It goes against everything that we’ve been trying to change,” Rice said.

The NFL has not publicly released what is in the 650,000 emails the independent investigators collected during an investigation of sexual harassment and other workplace conditions at the Washington Football Team. Gruden resigned last week as Las Vegas Raiders coach after his denigrating comments were reported.

NFL Players Association chief DeMaurice Smith has called for the league to release every email from the investigation.

On Thursday, Rep. Carolyn B. Maloney, Chairwoman of the Committee on Oversight and Reform, and Rep. Raja Krishnamoorthi, Chairman of the Subcommittee on Economic and Consumer Policy, sent a letter to NFL Commissioner Roger Goodell requesting documents and information regarding the investigation and the league's handling of it.

“The NFL has one of the most prominent platforms in America, and its decisions can have national implications,” the chairs wrote. “The NFL’s lack of transparency about the problems it recently uncovered raise questions about the seriousness with which it has addressed bigotry, racism, sexism, and homophobia — setting troubling precedent for other workplaces. The Committee is seeking to fully understand this workplace conduct and the league’s response, which will help inform legislative efforts to address toxic work environments and workplace investigation processes; strengthen protections for women in the workplace; and address the use of non-disclosure agreements to prevent the disclosure of unlawful employment practices, including sexual harassment. We hope and trust that the NFL shares the Committee’s goal of protecting American workers from harassment and discrimination.”

Jenkins said “transparency” will “expose the culture of the NFL.”

“We have a long history, obviously, in this country of things being white-dominated. ... and we’ve never really about-faced from that type of environment or that culture, especially when it comes to the very top decision makers in the league,” Jenkins said.