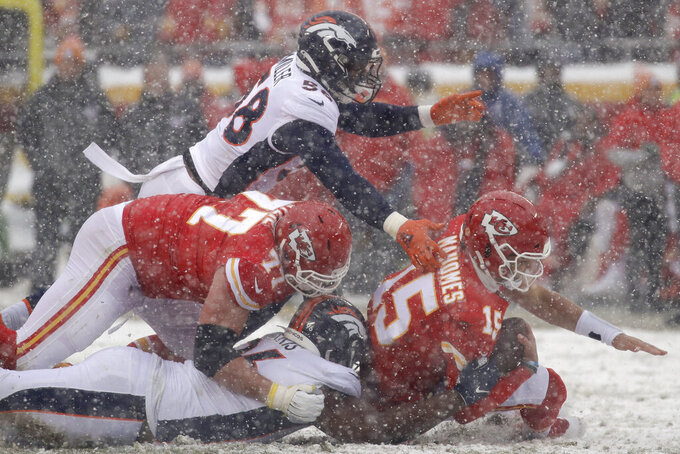 ENGLEWOOD, Colo. (AP) — Vic Fangio insists Von Miller's perpetual optimism isn't among the ruins as the losses pile up for the Denver Broncos.

"He's been a positive influence and a positive part of this team, and that will continue," Fangio declared Monday, 24 hours after Miller's heartfelt comments about how all this losing "defeats my soul."

Fangio blamed Miller's melancholy mood after Denver's 23-3 loss to the Kansas City Chiefs in the snow at Arrowhead Stadium on "the frustration of losing to those guys again."

A ninth consecutive loss to the Chiefs (10-4) ensured a third consecutive losing season for the Broncos (5-9) for the first time in 47 years and stretched their playoff drought to four years.

The MVP of Super Bowl 50, Miller had always seemed impervious to the franchise's constant about-faces at coach and quarterback, and the team's inability to cover tight ends or keep up with modern offensive innovations.

The latest loss, though, really got to him.

The Broncos have gone 25-37 since their last Super Bowl title. They're on their third coach and seventh quarterback since Gary Kubiak so deftly managed Peyton Manning through the many minefields of the 2015 season to secure the franchise's third Lombardi Trophy.

The 53-9 combined score of Denver's two losses to Kansas City shows how big the gap is between the teams. The last time they were dominated like that was in 2007 when they were swept by the San Diego Chargers by a combined 64-6.

While Broncos rookie Drew Lock struggled in the snow, completing just 18 of 40 passes for a 50.8 passer rating, Patrick Mahomes led the Chiefs (10-4) on five scoring drives to start the game and finished with 340 yards on 27 of 34 passing.

"No, I wasn’t surprised," Miller said. "Mahomes is a great quarterback and they’ve got a great team, running and passing. It’s probably easier for him to pass in these conditions because he’s getting (Travis) Kelce one on one down the field. It’s already hard enough to guard him on grass, so you mix in the snow, it’s a tough deal for the DBs and a tough deal for everyone that was out there.

"It was tough because those guys played great. They’ve had a great team for a long time."

Miller, however, did say he sees reason for hope in Denver.

"Drew is definitely the future," he said. "It’s everybody around. Guys have to get open, the offensive line has to block, guys have to run the ball, just cliche little things. Drew is doing what he needs to do. Defense needs to stop messing around and rush the pass and play tight coverage. We have got to sound like a broken record up here because we keep saying the same thing. We found our quarterback and we have a great one, but everybody else needs to step up.

"I guess it just looks different from my end. I’m 30 years old and I’ve been playing in the league for nine years, I’m ready to hit the gear and go again. I’m ready to bring whatever we had in the past back."

Like Miller said, the Broncos haven't solved their issues covering tight ends. That's a job for Elway in the offseason.

DL Shelby Harris had his second multi-sack game of the season, giving him a career-best six sacks.

Coldy Wadman dropped his first punt on a clean snap before settling in.

2 — WR Courtland Sutton dropped two passes; he had only one in the first 13 games.

The Broncos have two winnable games against Detroit and Oakland to close out the season on a positive note to try to head into 2020 with more optimism.