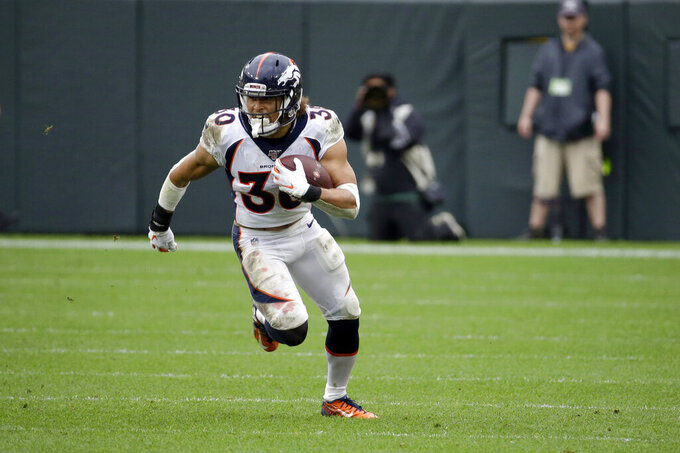 Denver Broncos running back Phillip Lindsay carries the ball during the second half of an NFL football game against the Green Bay Packers, Sunday, Sept. 22, 2019, in Green Bay, Wis. (AP Photo/Mike Roemer)

ENGLEWOOD, Colo. (AP) — Emmanuel Sanders, one of eight players on Denver's roster who remember what winning a Super Bowl felt like, declared after the team's latest loss that the Broncos are "living in a world of suck."

But no panicking, either.

"He was just repeating what I had said in the locker room after the game," Fangio said Monday. "I told them, 'We're going to have to deal with everybody thinking we suck.' And (it's) all of us, not just players coaches, everybody, the whole organization."

The Broncos won't deal with that by taking chances or by making changes, said Fangio, the first head coach in the franchise's 60-year history to start 0-3.

"We've just got to stick through it and get through the hard times," Fangio said.

He said the "easiest thing to do is just make wholesale changes, whether its personnel, scheme, this, that and the other thing. There's the old saying, 'Keep doing the same thing and expect different results, that's not smart.' But there's also a saying, 'Change for just change's sake isn't very smart, either," Fangio said.

He acknowledged that staying the course is a harder sell without the reinforcement of results.

"I think you just show them the video evidence of why you feel that way," Fangio said.

One thing he's certain of is the Broncos, who host Jacksonville next weekend, have the talent to turn it around quickly.

"We just have to play a little bit better," Fangio said. "And along with that, we have to coach better."

Second-year WR Courtland Sutton, whose 52-yard catch was the gemstone of his five-catch, 87-yard day, also had a key downfield block that helped RB Phillip Lindsay cap a 36-yard catch-and-run that set up a TD.

Despite Denver's defense not getting any inside push to collapse the pocket, OLB Bradley Chubb had three tackles for loss and the lone hit on Aaron Rodgers in the Broncos' 27-16 loss at Green Bay.

The pairing of Fangio and Miller was expected to make history, but not this kind: Since 1982, when sacks became an official statistic, the Broncos are the only team to go this deep into a season without a sack or a takeaway.

Although Miller dropped into coverage about a half-dozen times, including the game's first snap, Fangio tried to dispel growing speculation that his scheme and his superstar linebacker just aren't a good fit.

Not helping matters is Denver's plodding offense with QB Joe Flacco (six sacks, two turnovers on Sunday) holding onto the ball far too long. The Broncos never led Sunday and they've have only had the lead for 12 of 180 minutes so far.

LT Garett Bolles didn't get flagged after collecting four penalties the week before, but the real hero of the O-line was rookie LG Dalton Risner, who put his pig-wrestling skills he honed while growing up on a Colorado farm to good use on fourth-and-goal when he grabbed Lindsay and spun him into the end zone .

That's how many sacks NFL leader Shaquil Barrett has for the Buccaneers after bolting the Broncos for a one-year, $4 million deal last spring, by far the biggest bargain in free agency.

Baby steps, starting with the Jaguars (1-2) and rookie QB sensation Gardner Minshew , who will try to extend Denver's losing streak to eight games, which would tie for the third longest in team history.

"We've just got to figure out a way to go out and play our best, cleanest game this week," Fangio said.