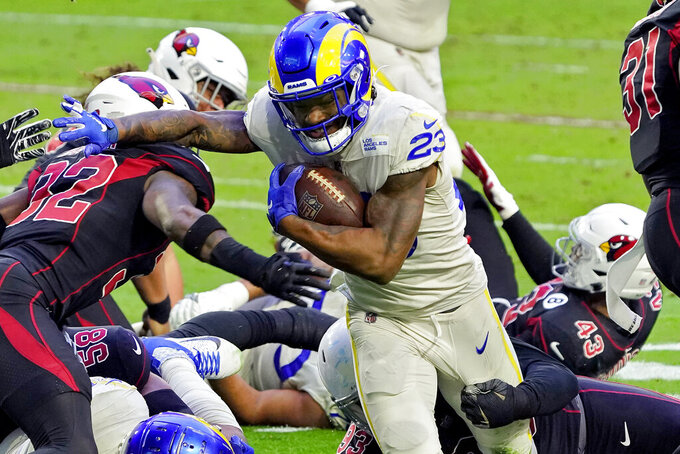 Week 14 is playoff time for most leagues, and while other leagues are concluding their regular seasons this week, the focus is on finding needed waiver wire depth for owners going into a playoff game.

Running backs are in abundance, but there’s also a handful of receivers that can offer a boost to postseason hopes. With bye weeks finally complete, streaming options at quarterback can be had as well.

TY JOHNSON, RB, Jets: The pass-catching specialist showed he can also move the chains on the ground, putting up 104 yards and a touchdown on 22 carries in the Week 13 loss to the Raiders. Frank Gore will be in the concussion protocol, and with the Jets continuing to figure out who fits their 2021 plans, Johnson is in prime position to see a heavy workload the rest of the way, which continues this week against a Seahawks defense that struggled against Giants RB Wayne Gallman in Week 13. Johnson is a must-grab acquisition.

KEKE COUTEE, WR, Texans: He’s still available in most leagues, yet that will change after his Week 13 outing that saw him catch eight passes for 141 yards on nine targets in the loss to the Colts. It’s safe to assume Coutee has become the go-to target for QB Deshaun Watson, a reality that will translate into a high target rate for him the rest of the season. With the Texans out of the playoff picture, look for Coutee to emerge as a fantasy hero for owners wise enough to add him to their lineups.

CAM AKERS, RB, Rams: The season-long logjam that is the Rams backfield may have broken in Week 13 when Akers had a career-best 22 touches from scrimmage for 94 total yards and a touchdown, dampening the hopes of fantasy owners who had been riding teammate Darrell Henderson. Akers had a whopping 52-18 edge on Henderson in snap counts, and as the Rams build toward their run for the postseason, perhaps the time has come for the second-round pick in this year’s draft to finally live up to expectations many fantasy owners had for him at the start of the season.

ADRIAN PETERSON, RB, Lions: Peterson scored twice in the Week 13 win over the Bears, giving him four touchdowns in his past two games. His production going forward is contingent upon the return of rookie D’Andre Swift, who is expected back in Week 14 following a three-game absence, but owners of Swift would be wise to add Peterson as an option in the event Swift remains sidelined. Peterson would be a heavy touchdown-reliant RB2 in Week 14, yet he’s one that will corner the market on Detroit’s ground game if needed.

T.Y. HILTON, WR, Colts: Once a mainstay in the early rounds of fantasy drafts, Hilton had struggled for fantasy owners this season. That is, until he put up a combined 12 catches for 191 yards over the past two weeks along with scoring in each game. Now might be the time to hop back on the Hilton bandwagon, especially since he has strong matchups in his next two games, the Raiders in Week 14 and the Texans in Week 15.

TIM PATRICK, WR, Broncos: He’s become the go-to option in Denver’s passing game and also ranks in the top 20 in yards per catch (15.2). Patrick scored twice in the Week 13 loss to the Chiefs while also catching all four of his targets for 44 yards. He’s due for a game of double-digit targets, and his production suggests he’d rack up solid fantasy numbers if given the opportunity as the Broncos’ WR1.

LOGAN THOMAS, TE, Washington: Thomas has quietly become a consistent option at the position, adding his fifth touchdown of the season in Monday’s upset of the then-undefeated Steelers. Regardless of who has played quarterback this season, Thomas has not lacked for targets, getting at least four in each game. He’s unlikely to hurt your roster, and since everyone can’t have Travis Kelce, Darren Waller and Eric Ebron, Thomas makes for a pretty solid option this late in the season.

ANTHONY FIRKSER, TE, Titans: Starter Jonnu Smith was sidelined in Week 13, paving the way for Firkser to grab five passes for 51 yards. Smith’s Week 14 status is in question, which would open the door for Firkser to get another start in Tennessee’s TE-friendly passing game.