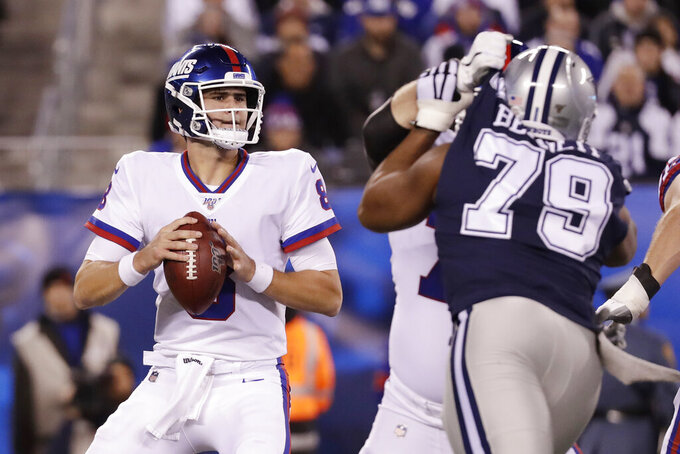 Every football season, fantasy owners have to deal with one or two of those monster bye weeks, and that's exactly what we have in Week 10.

There are six teams on a bye — the Broncos, Patriots, Eagles, Redskins, Jaguars and Texans — so we'll be without some heavy hitters for sure. That makes the waiver wire all the more important. Let's make the most of it.

Daniel Jones was a popular waiver wire add back in Week 3 when he made his successful debut against the Tampa Bay Buccaneers. Since then, he's been inconsistent and careless with the football at times. Despite a terrible performance against the Cowboys, Jones should be able to get back on track against the Jets in Week 10. The Jets just lost to the Miami Dolphins, a team trying to tank. In that loss, they allowed Ryan Fitzpatrick to throw for 288 yards and three touchdowns. That makes it two games in a row that the Jets' secondary has allowed quarterbacks to throw for three touchdowns. Jones has struggled to handle pressure this season, which is another reason I like him against the Jets. Gang Green currently ranks 29th in the NFL with just 13 sacks on the season. That should allow Jones the time and composure to make plays down the field. He's the top quarterback to add if you're hurting from the byes this week. If Jones already is owned in your league or you want to pivot off him, Ryan Tannehill is another option. Tannehill has been solid with the Titans, completing nearly 72% of his passes, throwing for more than 300 yards in two of his three starts. He also has had a safe floor in fantasy football, providing at least 19 fantasy points in each of the past three games. The Chiefs' pass defense has mostly played well this season but has allowed six passing touchdowns over the past two games. With the Titans likely playing from behind, we should get volume from Tannehill in Week 10.

Ryan Fitzpatrick just won't let the magic end. His 288 passing yards and three touchdowns against the Jets in Week 9 allowed Fitzpatrick to finish as a top-7 quarterback in fantasy football. He now has at least 21 fantasy points in two of his last three starts. In Week 10, Fitz will face the Colts, one of the better secondaries so far this season, but he will likely have to pass a lot. The Dolphins lost starting running back Mark Walton to a four-game suspension Monday, which means more work for Fitzpatrick. If you play in a superflex league and were relying on Jacoby Brissett, you should grab Brian Hoyer off waivers. Brissett is questionable for Week 10 but more like doubtful because he's dealing with an MCL sprain in his left knee. Hoyer filled in this past week, tossing three touchdowns against a stout Steelers secondary. It helps that in Week 10 Hoyer gets to face the Dolphins, whose defense is allowing the fourth most fantasy points to quarterbacks.

One of the favorites of the fantasy football community, Ronald Jones again is a top waiver wire target. It seems Buccaneers coach Bruce Arians has been hesitant to fully unleash Jones, but we're getting closer. In Week 9, Jones played a career-high 53% of the snaps and led the team with 18 carries for 67 yards and a touchdown. Jones' 18 totes represented 78% of the Bucs' running back carries against the Seahawks, a massive workload. In Week 10, the Bucs face the Cardinals, whose defense is allowing 4.41 yards per carry to opposing running backs. As home favorites this week, the Bucs should get a positive game script for Jones in a plus matchup. Once again, now is the time to stash Derrius Guice with the Washington Redskins on a bye. Since interim head coach Bill Callahan took over, Washington has been more run-centric. Over the past four weeks, Adrian Peterson is averaging 18.8 carries and 95.8 rushing yards per game. Now that might scare some people into thinking Peterson is still the guy, but I think the team will turn it over to Guice out of their bye week. As great as Peterson has been, he is 34 years old and the Redskins are 1-8. They need to see what the 22-year-old Guice can do. His schedule out of the bye is a great one as well, with the Jets, Lions, Panthers and Packers coming up.

As mentioned earlier, Dolphins starting running back Mark Walton has been suspended for four games. It's not the most desirable backfield as they're averaging just 63.8 rushing yards per game, 31st in the NFL. Still, Ballage is likely in position to see double-digit touches moving forward. The problem is that Ballage has been terribly inefficient, rushing 35 times for just 70 yards. He'll likely get the first shot, but the sleeper here is Myles Gaskin, a rookie sixth-round pick out of Washington. Gaskin was a four-year starter for the Huskies, amassing 5,788 scrimmage yards with 62 total touchdowns. A few more deeper league targets include Trey Edmunds and Gus Edwards. Edmunds just led the Steelers backfield with 73 rushing yards on 12 carries. If James Conner returns, however, Edmunds will have little to no value. Edwards is an interesting look as the Ravens face the Bengals in Week 10. The Bengals allow 4.86 yards per carry and the second most fantasy points to running backs this season. With the Ravens 10-point favorites in Cincinnati, we could see some garbage-time production from Edwards.

With T.Y Hilton out the next 3-4 weeks, somebody needed to step up in the Colts' pass game. That somebody is Zach Pascal. In Week 9, Pascal finished with five receptions, leading the team with 76 receiving yards and a touchdown on six targets (19% target share). Pascal also led Colts wide receivers with 94% of the snaps and 40 routes ran. Up next the Colts face the Dolphins, who have allowed 14 touchdowns to wide receivers this season, the most in the NFL. They've also allowed the seventh most fantasy points to the position. If somebody in your league already jumped on Pascal, look at Chester Rogers. Rogers also scored a touchdown in Week 9, playing on 66% of the snaps. Given how good the matchup is, Rogers could also take advantage in this spot. After playing for Clemson as a walk-on, Hunter Renfrow is now making an impact in the NFL. Renfrow has scored in back-to-back games and during that span, he leads the Raiders with 18% of their target share. Renfrow has become a reliable bye-week replacement in points-per-reception leagues.

Adam Thielen returned to action in Week 9 but didn't last long because he re-aggravated his hamstring injury. He played only seven snaps. As a result, Olabisi Johnson played 83% of the snaps and scored a touchdown against the Chiefs. Johnson has now scored a touchdown in two of the last three games Thielen has missed. Another deep-league option is Deebo Samuel, who just tied a season high with seven targets in Week 9. Samuel appeared on 64% of the 49ers' snaps, running the second most routes among their wide receivers. The 49ers host the Seahawks in Week 10, a secondary that just allowed Mike Evans to go for 12-180-1. Not only are the Dolphins dealing with a suspension for their starting running back, they just lost starting wide receiver Preston Williams for the season. While the Dolphins could mix and match to replace Williams, Jakeem Grant is the wide receiver that plays a similar role on the outside. Considering the Dolphins pass the ball the third most in the NFL, you want exposure to their some of their pass catchers.

Gerald Everett is already owned in a lot of fantasy leagues, but check to make sure he wasn't dropped in yours when the Rams were on a bye in Week 9. Everett has become a bigger part of the offense over the past five weeks, accounting for 18% of the Rams' target share. If Everett is already owned, Mike Gesicki is the next option up. Gesicki caught all six of his targets in Week 9 for 95 yards. He's now played more than 60% of the snaps for the Dolphins in each of the past two games. With Preston Williams going down, there are even more targets to go around for this team. Gesicki has a strong Week 10 matchup against the Colts, who are allowing the seventh most fantasy points to tight ends this season. Speaking of the Colts, Jack Doyle scored a touchdown for them in Week 9. It's annoying that Doyle and Eric Ebron take away from each other, but Doyle consistently plays more snaps and runs more routes. The Dolphins allowed six catches to Jets tight end Ryan Griffin, so Doyle should be able to have success.

If you're looking for streaming defenses, the top adds for Week 10 will be the Giants (at NYJ), the Ravens at (CIN) and the Colts (vs. MIA).