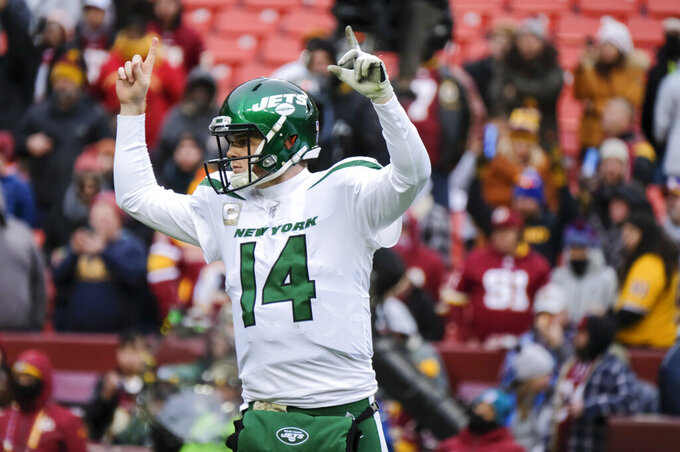 New York Jets quarterback Sam Darnold (14) celebrates a touchdown against the Washington Redskins during the second half of an NFL football game, Sunday, Nov. 17, 2019, in Landover, Md. (AP Photo/Mark Tenally)

As we head into Week 12 of the fantasy football season, you should be focusing on the future just as much as the present. I’m sure some of you reading this are in must-win situations in order to keep your season alive. That’s fine.

For those who already locked up a playoff spot, keep an eye on fantasy playoff schedules. Let’s jump in.

Move over Danny Dimes, there’s a new king of New York. It took a while but this Jets offense is finally starting to take off. In Week 11, Sam Darnold put together the first four-touchdown performance of his career, finishing as a top-eight QB in fantasy football. Darnold has at least 22 fantasy points in back-to-back games. He’ll have a good chance to make it three in a row in Week 12 as the Jets host the Oakland Raiders.

On the season, the Raiders have allowed the third-most passing touchdowns (24) and the fourth-most fantasy points. Darnold is among one of the best QB streams in Week 12. Outside of Darnold, Jacoby Brissett has a great matchup against the Houston Texans on Thursday night. The Texans have been a secondary to target all season and that didn’t change this past week as Lamar Jackson threw for four touchdowns. Speaking of which, Brissett threw four touchdown passes in his previous outing against this Texans defense. Considering Marlon Mack just broke his hand, the Colts could lean more on the pass game on the short week.

If you want to focus on the fantasy playoffs, Ryan Tannehill should be your guy. In Weeks 14-16, Tannehill takes on the Raiders, Texans and Saints. As mentioned above, the Raiders and Texans both rank inside the top 10 in fantasy points allowed to quarterbacks this season.

Tannehill has started four games for the Titans, posting at least 19 fantasy points in each of those. Tannehill also has career highs in completion rate (71.3 percent), yards-per-attempt (8.4) and quarterback rating (104.4). Based on how consistent Tannehill has been and his upcoming schedule, fantasy owners should consider him.

Bo Scarbrough at WAS

After 11 hard-fought weeks in fantasy football, owners find themselves desperate for running backs. Upon pulling up the Week 12 projections, you find Jonathan Williams ... and Bo Scarbrough. What is going on? Some might remember Williams from his brief time with the Buffalo Bills and the New Orleans Saints.

Once upon a time, he was a sought-after commodity. Well, here we go again. Marlon Mack fractured his hand in Week 11 and will not be ready to go on Thursday night. Williams stepped up in his absence, totaling 147 yards on 14 touches in Week 12. His 29 offensive snaps led all Colts running backs. Now Jordan Wilkins could be back in the mix for the Colts, but he missed Week 11 with an ankle injury.

As of now, we should expect the Colts to roll with a tandem of Williams and Nyheim Hines. Speaking of Hines, he’ll face the Texans in Week 12, a defense allowing the most receptions to running backs this season. Williams should be the priority with Hines in the mix in PPR leagues. The next man up after the Colts is Scarbrough from the Detroit Lions. Yes, we’ve been burned by Ty Johnson and JD McKissic but Scarbrough is different. Scarbrough fits the bill as the Lions’ early down runner. He led the team with 49 percent of the snaps in Week 11, rushing 14 times for 55 yards and a touchdown. Scarbrough will face Washington in Week 12, a defense allowing the seventh-most fantasy points to running backs.

Alexander Mattison is on a bye in Week 12, but if you’re a Dalvin Cook owner, you need to have Mattison on your team. If Dalvin Cook is 100 percent owned in fantasy football, why is Mattison owned in fewer than 30 percent of leagues? You might look at a handcuff as a waste of a roster spot but they’re not. Every year, there is a handcuff that wins championships. See C.J. Anderson in 2018. It doesn’t matter who it is. If you own Ezekiel Elliott, grab Tony Pollard. If you have Chris Carson, make sure you get Rashaad Penny. Be proactive. This is more of a deeper add but take a look at Jay Ajayi. He’s more insurance than anything for the Eagles but if Jordan Howard continues to miss time, Ajayi will get in the mix.

We’ll start off in Pittsburgh where JuJu Smith-Schuster and Diontae Johnson are both dealing with injuries that could keep them out in Week 12. Normally, we wouldn’t want to target a Mason Rudolph-led passing game, but they need to throw the ball to somebody. Washington led the Steelers with 61 snaps and 50 routes ran in Week 11 and has a plus matchup against the Bengals this week. While the Bengals are known for that dreadful run defense, they rank last in pass defense DVOA. If you’d like to target a wide receiver on a better offense, look no further than Hunter Renfrow.

Over the past four weeks, he leads the team with 18 percent target share, 19 receptions, and 250 receiving yards. Renfrow and the Raiders face the Jets in Week 12, a defense allowing the second-most fantasy points to wide receivers.

We don’t know if Mitchell Trubisky will be the starting quarterback for the Chicago Bears in Week 12 as he deals with a hip injury. Backup quarterback Chase Daniel likely puts their pass catchers in a better position to succeed.

Speaking of those pass catchers, Taylor Gabriel is coming off a Week 11 game with 14 targets. Over the past month, Gabriel leads the team with a 23 percent target share, 18 receptions, and 218 receiving yards. The Bears face the Giants in Week 12, who are allowing the fourth-most fantasy points to opposing wide receivers.

Tim Patrick just made his season debut with the Denver Broncos. He instantly stepped up as the team’s WR2, playing the second-most snaps (57) and running the second-most routes (38) among their wide receivers. Patrick finished with four receptions and 77 yards on eight targets, accounting for 20 percent of their target share.

In case you forgot about Jacob Hollister because of the bye week, here’s your reminder. Hollister is doing his best Will Dissly impersonation, hauling in three touchdowns over the Seahawks past two games. He’s had at least six targets in three of their past four. Zach Ertz is not the only Eagles tight end who is a must-own player. Since Week 6, Dallas Goedert has seen 16 percent of the Eagles target share and leads the team with three receiving touchdowns. Goedert and Ertz face the Seahawks in Week 12, a defense allowing the ninth-most fantasy points to tight ends.

Last but not least we have Ryan Griffin of the New York Jets. We waited all season for Chris Herndon but he’s on injured reserve. Griffin hauled in all five of his targets in Week 11 for 109 yards and a touchdown. As I’ve mentioned multiple times, we should expect points in that Raiders-Jets game in Week 12. That should bode well for Griffin.

If you’re looking for streaming defenses, the top adds for Week 12 will be the Falcons (vs. TB), the Browns (vs. MIA), and the Lions (at WAS).