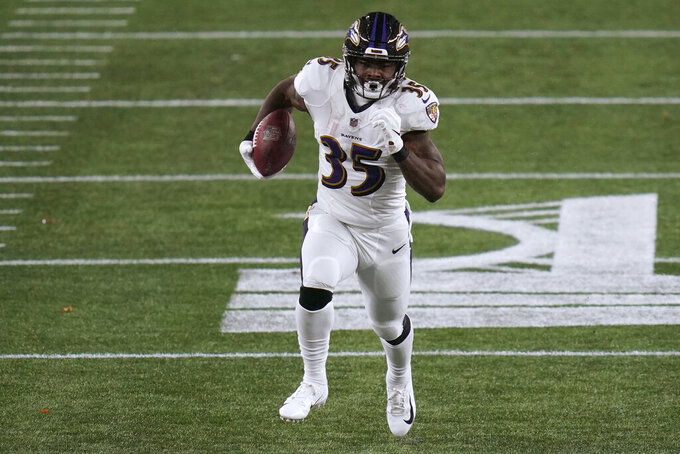 Baltimore Ravens running back Gus Edwards gains yardage against the New England Patriots in the first half of an NFL football game, Sunday, Nov. 15, 2020, in Foxborough, Mass. (AP Photo/Charles Krupa)

With only two weeks remaining before the end of the regular season in most fantasy leagues, the waiver wire still offers solutions to the problem of making the playoffs.

Several of those available will have a chance to make an immediate impact during the three-game schedule on Thanksgiving.

Deeper leagues will unearth some value at the quarterback position, yet the Week 12 waiver wire dive leans in the direction of those in need of help at wide receiver.

GUS EDWARDS, RB, Ravens: The short-yardage specialist will probably see a season-high snap count against the Steelers on Thanksgiving night as COVID-19 has hit the Baltimore backfield as regulars Mark Ingram and J.K. Dobbins are expected to miss the game. Edwards has just 10 total carries the past two games and while he faces a Pittsburgh defense ranked seventh in fewest rushing yards allowed, the potential of a short-yardage touchdown increases with a higher volume of touches.

Deeper fantasy league owners who miss out on Edwards can pivot in the direction of Justice Hill, who has all of one reception for 3 yards this season. Hill is the better of the two when it comes to receiving and will likely see the bulk of the snaps in passing situations. He should see at least 40% of the snap count and offers the promise of potential for PPR owners seeking to benefit off Baltimore’s backs.

MICHAEL PITTMAN, WR, Colts: He’s becoming an impact player in the diverse Indianapolis passing game, having put up 101 yards in Week 10 before following with 66 yards and his first NFL touchdown in the Week 11 thriller over the Packers. Pittman has seen a total of 18 targets in his three games back from injured reserve while also accumulating at least an 80% snap count in each game. Philip Rivers doesn’t have a true WR1, but the rookie from USC offers the highest ceiling with a chance to make a Chase Claypool-like rise up the fantasy charts, all the more reason he must be added this week.

TIM PATRICK, WR, Broncos: Back as the hot hand in the Denver passing game, Patrick is averaging nearly eight targets per game over the past three weeks and picked up his third 100-yard game of the season in the Week 11 win over the Dolphins. In the five games he has had at least an 80% snap count this season, Patrick has either scored a touchdown and/or went over the 100-yard mark in four of them. Patrick is averaging a healthy 15.6 yards per catch, making him an under the radar play that will pay off so long as QB Drew Lock frequently looks in his direction.

SALVON AHMED, RB, Dolphins: Even with the return of Matt Breida, Ahmed remained the team’s clear RB1 with a 66% snap count in the Week 11 loss to the Broncos. Ahmed has 39 touches from scrimmage the past two weeks and should be added in leagues where he's still available. He should remain the back of choice despite the presence of Breida and the looming return of Myles Gaskin.

COREY DAVIS, WR, Titans: Davis' mini-slump ended with five catches for 113 yards on seven targets in the Week 11 overtime win over the Ravens. Davis has three 100-yard games this season and is likely available in standard leagues since a majority of his fantasy owners waived him after he was shut out against the Bears in Week 9. His play-making ability and a solid yards per target (10.0) rate makes Davis a good add for owners in need of a WR2/WR3-caliber performer down the stretch.

TAYSOM HILL, QB, Saints: Hill didn’t throw a touchdown pass in the win over the Falcons, but added 51 yards and two scores on 10 attempts. If it feels as if Hill is similar to Patriots QB Cam Newton, it’s because he is. New Orleans’ receiving group will suffer if Hill and the Saints running backs are consuming the bulk of touchdowns, yet the thought of Hill as a streaming option the next couple of weeks can offer upside to fantasy owners.

DALTON SCHULTZ, TE, Cowboys: Schultz scored in the Week 11 win at the Vikings, his first trip to the end zone since Week 4. In a position swamped with uneven play across the board this season, Schultz has become a source of consistency in PPR formats as he has caught at least four passes in four of his past five games. If fantasy owners are buying in that QB Andy Dalton’s Week 11 outing is a sign of better things in the Dallas passing game, now’s the time to add Schultz to the roster.

JALEN REAGOR, WR, Eagles: Reagor’s numbers (eight receptions, 99 yards) over the past two games look pedestrian, yet the numbers to look at are his snap counts (88% and 93%) in the same span. The Eagles have used Reagor as an underneath option lined up in the slot, a usage that should change on Monday when Philly gets its turn against a Seattle secondary that’s the league’s worst in fantasy points per game allowed to opposing wideouts. This might be the breakout game the Eagles have been waiting on from their first-round pick, so astute fantasy owners in deeper leagues may want to follow suit.

ALEX SMITH, QB, Washington: Fantasy owners looking for a high-reward play may want to consider Smith, who gets a Thanksgiving Day matchup against a Cowboys defense that has allowed a league-high 24 touchdown passes. Smith hasn’t moved the fantasy needle, yet the thought of lighting up a suspect secondary such as the Cowboys is a tempting proposition for owners in deeper leagues who come into Week 12 with an all-or-nothing mindset.