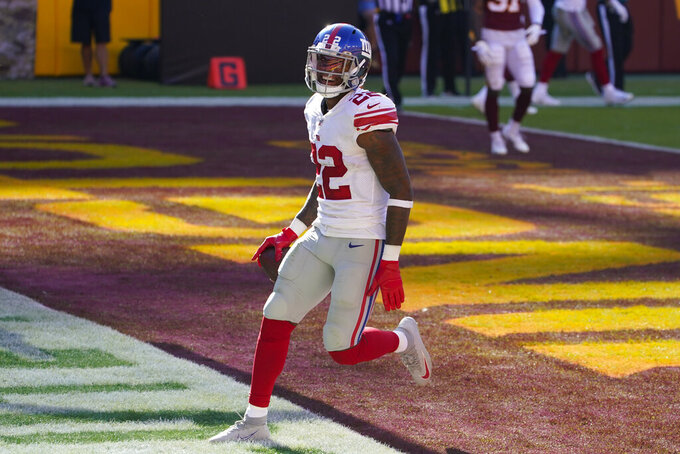 New York Giants running back Wayne Gallman (22) smiles as he scores a touchdown against Washington Football Team in the first half of an NFL football game, Sunday, Nov. 8, 2020, in Landover, Md. (AP Photo/Patrick Semansky)

There is still quality to be found in the waiver wires entering Week 10 of the fantasy football season.

Although much of it has already been claimed, this week offers a host of options that can be difference-makers as the final stretch before the fantasy playoffs kick off starting with Thursday’s Colts-Titans matchup.

Byes will certainly impact fantasy owners who rely on the Falcons, Cowboys, Chiefs and (to a lesser extent) Jets, all of whom are off this week. Owners of Patrick Mahomes and Matt Ryan will have to resort to a streaming option hoping to get reasonable production.

DUKE JOHNSON, RB, Texans: Johnson had a season-high 20 touches from scrimmage (16 rushing) after replacing the injured David Johnson (concussion) in Sunday’s win at the Jaguars. With David Johnson in concussion protocol, look for Duke Johnson to exceed the 11% snap count he had in Week 9 when he faces the Browns on Sunday. If he gets the start, Johnson will have strong flex value in PPR formats.

JAKOBI MEYERS, WR, Patriots: New England’s anemic passing game just may have found a much-needed boost in Meyers, who caught 12 of 14 targets for 169 yards in Monday’s win at the Jets. Meyers has been targeted 26 times over the past two games and averaged just over 12 yards per target on Monday night. The rapport with QB Cam Newton is strong and should carry over into the Week 10 game against the Ravens. Meyers is definitely a must-add whose numbers will have upside the rest of the season.

CORDARRELLE PATTERSON, WR/RB, Bears: Chicago could be without starter David Montgomery (concussion) for Monday’s game against the Vikings, leaving Patterson as Chicago’s best option to fill the void. The Bears have used Patterson out of the backfield as he has 29 carries for 88 yards. Patterson has yet to top 24% in snap count this season. He’s an intriguing add in deeper leagues, especially if the Bears don’t add a free agent RB and/or bring up RB Lamar Miller from the practice squad.

WAYNE GALLMAN, RB, Giants: With touchdowns in three straight games, Gallman merits attention. He also comes off a season-best 68 rushing yards in the Week 9 win at Washington and appears to be in line for another start if Devonta Freeman is sidelined for another week. Gallman has had better than 50% of the snap count the past two weeks among Giants RBs, clearly making him the best fantasy option over Dion Lewis and Alfred Morris. The potential for a high volume of touches makes Gallman a solid add with flex appeal for Sunday’s game against the Eagles.

KALEN BALLAGE, RB, Chargers: Ballage is fantasy-relevant after replacing the injured Justin Jackson and delivering 69 yards and a touchdown on 15 carries in the Week 9 loss to the Raiders. That Ballage got the bulk of the carries over rookie Joshua Kelley was a bit of a surprise, but Ballage’s performance gives him the clear edge over Kelley if Jackson is unable to suit up for Sunday’s game at the Dolphins. He’s worth the add in deeper leagues and for Jackson’s owners in need of ensuring they continue to benefit off the Chargers’ ground game.

BRESHAD PERRIMAN, WR, Jets: Pulling in five catches for 105 yards and two scores in Monday’s loss to the Patriots puts Perriman on fantasy radars. The talent has always been there, and while his Week 9 numbers might be a one-off, the fact that Perriman has been targeted at least seven times in two of his past three games could be a sign that the 2015 first-round pick gets an extended look the rest of the season. Perriman has intriguing value and benefits from having once played with Jets QB Joe Flacco when the two were in Baltimore.

J.D. MCKISSIC, RB, Washington: McKissic had a season-high 83% snap count in the Week 9 loss to the Giants and became the security blanket for QB Alex Smith, who targeted McKissic 14 times. The pass-catching specialist caught nine of those targets for 65 yards and will be a good add in PPR formats the remainder of the season. Washington is committed to keeping Smith as the starter in place of the injured Kyle Allen (ankle), news that translates well for McKissic becoming an even more valuable part of the team’s passing game.

TUA TAGOVAILOA, QB, Dolphins: He’s best-suited in two-QB leagues, but Tagovailoa merits consideration in deeper standard leagues. Tagovailoa tossed a pair of touchdown passes while accounting for 248 passing yards and 35 rushing yards in the Week 9 win over the Cardinals. He’s set up for a good Week 10 play as the Dolphins meet a Chargers team that allows the second-most fantasy points per game to opposing quarterbacks.

MASON RUDOLPH, QB, Steelers: Ben Roethlisberger was among four Steelers who were placed on the team’s Reserve/COVID-19 list. Roethlisberger will be isolated for up to five days and would have to pass a series of COVID-19 tests in order to suit up for Sunday’s game against the Bengals. Roethlisberger owners, who were already concerned about his injured knee, may now have to consider Rudolph, who threw for 13 touchdown passes last season after replacing Roethlisberger in the starting lineup. Pittsburgh’s loaded offense will give Rudolph a chance to be a deep fantasy sleeper if he’s required to start on Sunday.